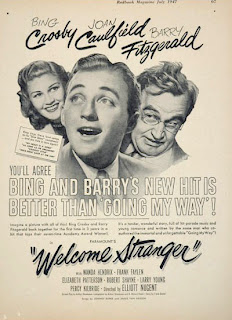 Here is another review from the New York Times of August 7, 1947. The Times are usually hard on Bing's movies, but I think this review is mostly positive...

The news most moviegoers must be waiting to hear about the new Bing Crosby-Barry Fitzgerald picture at the Paramount Theatre is, "How does it compare with 'Going My Ways'?"

Well, it can be said that "Welcome Stranger" is as genial as the day is long—just the kind of picture that is nice to have around, even though it may not prompt one to shout huzzas. While it is not the intention to sell short this amiable comedy-drama about a pair of smalltown medical practitioners, the fact is that "Welcome Stranger" misses by a considerable margin the high mark in entertainment established by its distinguished predecessor.

Comparisons are, at best, invidious, but sometimes they are unavoidable. And certainly Paramount invited such when it consciously determined to capitalize on the phenomenal success of "Going My Way" by reuniting Crosby and Fitzgerald under circumstances not too dissimilar in "Welcome Stranger." This time the boys are joined by Hippocratic allegiance rather than ecclesiastical bonds, but the film still tells the story of a young man and his relationship with a crotchety elder.

It is an amusingly contrived story for the most part and gets off to a humorous start through a series of engaging misunderstandings between old Doc McRory, planning his first vacation from the good people of Fallbridge in thirty-five years, and his flashily dressed, tune-humming replacement. Jim Pearson's breezy mannerisms and the obvious play he makes for the pretty school teacher at a barn dance going-away party for Doc McRory cause the townsfolk to turn on their New England acerbity. And it is not until circumstances cause him to save the old Doc's life by performing an appendectomy with only the "teach" to assist that his medical ability is recognized. 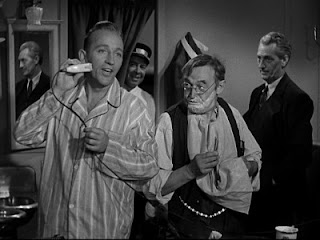 Despite this blatantly raelodramatic device and the sentimental circumstance wherein Pearson helps McRory to outwit the Chamber of Commerce president, who would deny him the office of superintendent of the town's first hospital, the light bantering spirit of the film is never lost. Credit for this, no doubt, can be shared by Arthur Sheekman, who wrote the script, and Elliott Nugent, who directed, but we are inclined to give the lion's share to the Messrs. Crosby and Fitzgerald.

Both tower over the script through sheer personality, and especially is this true in Mr. Crosby's case, for Mr. Sheekman has not invested the character of Jim Pearson with much substance. Mr. Fitzgerald's Doc McRory is a more rounded individual, and he does have some quaintly flavorsome dialogue—"blatherskite" is one of his less endearing terms for the young assistant. Joan Caulfied is lovely and competent as the teacher and several lesser roles are well turned out, notably Percy Kilbride's taxi driver and Elizabeth Patterson's housekeeper. 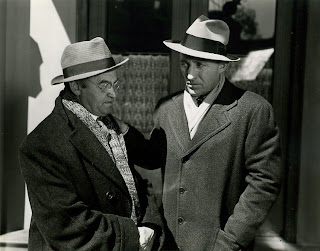 Featured on the Paramount stage are Carmen Cavallaro and orchestra; Bob Allen and Leslie Long; Raul and Eva Reyes and Nip Nelson.

SOURCE
Posted by David Lobosco at 5:04 AM