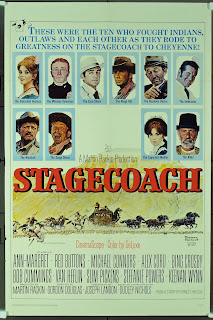 Now the 1966 version of The Stagecoach is not a cinematic gem, but it does include one of the last movie roles Bing Crosby appeared in. It will be coming out on DVD on October 11th:

Here is an except from the DVD booklet excerpts by film historian Julie Kirgo. Her comments are interesting to say the least:

Let’s begin by addressing the elephant in the room: Stagecoach (1966) is a remake of Stagecoach (1939), which actually makes it less like a pachyderm and more like a sitting duck. Why remake the perfect motion picture, an endlessly entertaining work of art brought forth by a visionary (director John Ford) who was intent, among other things, on introducing audiences to one of the most enduring stars in Hollywood history (the utterly sui generis John Wayne)?

Hubris might be one answer, but there are others of perhaps greater legitimacy. First and foremost, however you slice it, Stagecoach offers a cracking good yarn; Dudley Nichols superbly adapted Ernest Haycox’s story, “Stage to Lordsburg,” for his 1939 screenplay, and Joseph Landon (Von Ryan’s Express) followed close on his predecessor’s heels for the ’66 version. Landon’s updates seem designed to reflect the changing mores of the day, not to mention the trend towards “adult” Westerns: a pregnancy can be revealed and discussed, rather than hidden until the moment a woman goes into labor; a “dance-hall creature” can be a clear-cut prostitute and not just a hussy; and violence merely suggested in 1939 becomes a thing, in 1966, of faces split by tomahawks, massacred bodies buzzing with flies, and buckets of well-rouged Karo syrup. (Whether the latter innovation constitutes an improvement depends, of course, on the individual viewer’s perspective.)

The earlier version of the film, with all its beauties, had been made in 1:33 black and white; now Twentieth Century Fox could present the sweeping landscapes of the old West in the lustrous glory of CinemaScope and DeLuxe Color. Cleverly, the latter-day filmmakers knew better than to tread on John Ford’s sacred ground, and moved the locale from the Southwest and Monument Valley to more northerly territories: the piney woods, rugged mountains, and tumbling cataracts of Colorado’s Indian Peaks Wilderness and Caribou Country Club Ranch standing in for what are, presumably, the Black Hills (presumably, because here Geronimo and the Apache give way to Crazy Horse and the Sioux as the stage party’s most formidable adversaries). 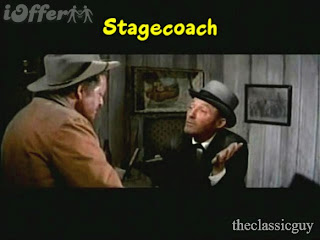