Frank Sinatra was the king of the concept album in the 1950s and 1960s. Even though Bing was the innovating giant from the 1930s to 1940s, he did not embrace this concept album genre as Sinatra did. However, when Bing did venture into the studio, he made audio gold. This article does a good job spotlighting a great album Bing did in 1956... 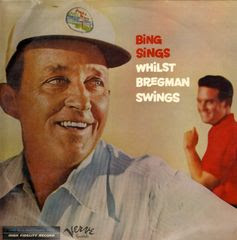 It’s 1956, and you’re Bing Crosby. (Would I lie to you? And isn’t it better this way?) You’ve been a recording artist for more than twenty-five years. You are one of the originators of popular singing in the age of the microphone and the gramophone record. In your day, you defined hip, and the name Der Bingle struck terror into squares everywhere. But it’s not quite your day anymore. Sinatra is wowing the world (in the third stage of his career, no less) with his lush and/or swinging long-playing concept records, arranged by brash young geniuses like Nelson Riddle and Billy May. Ella Fitzgerald just recorded her first songbook album (Cole Porter) with the barely pubescent arranger Buddy Bregman. It’s doing well. You are given the chance to do an album with Buddy Bregman yourself, on the Verve label. What do you say? 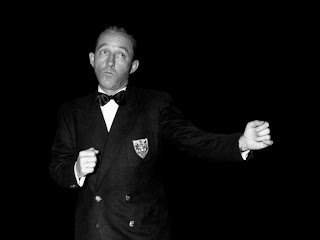 Bing said yes, sir! And that spirit of can-do positivity infuses this record. Bregman may not be Nelson Riddle, but he outdoes himself with his arrangements for Bing here, filling every moment with energy, wit and inspiration. That’s a double-edged sword, and therein lies the rub: when every moment is occupied, even by an arranger on the top of his game, it leaves the singer unable to fill those spaces in a way that seizes the imagination of the listener. (Candidly speaking, Sinatra would have shot Buddy Bregman — and then had lunch.) But Crosby, while not given the optimum opportunity to shine, can still sing, dammit, and one gains a new respect for his tonsils hearing him blast through these numbers in an effort to be audible. He’s also getting to tackle a bunch of songs he’d never before recorded, and great songs too. Who doesn’t want to hear Bing Crosby sing the Rodgers & Hart classics Mountain Greenery, The Blue Room, and Have You Met Miss Jones? And the Gershwin gems: They All Laughed and Nice Work If You Can Get It? Among the best of the bunch is Irving Berlin’s sexy Cheek to Cheek; Bing just nails it here. 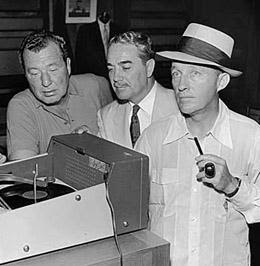 In 1956, the album passed people by. Crosby had two very different albums out the same year on other labels, and then there was The King And I in movie theaters, and Elvis Presley, and, and … . It doesn’t matter. Listen to it today in pristine quality, and it’s something. It makes you very glad that for a month or so in 1956, these guys stopped long enough in a recording studio to put these tracks down. Sure, it could be better, but so could chocolate ice cream: does that mean you don’t eat it when it’s in a bowl right in front of you?