BING CROSBY: THROUGH THE YEARS VOLUME 8 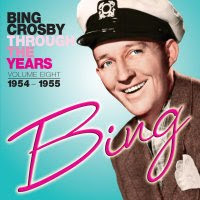 This is Volume Eight of the acclaimed series covering Bing Crosby's recordings made in the 1950s issued in chronological order.

The 25 songs here feature tracks Crosby made between June 1954 and July 1955 including the final instalment of songs that formed Crosby's marathon recording project, the best-selling 5 LP set entitled 'Bing Crosby - A Musical Autobiography' which sold for $25 in 1954. The 4 tracks from his Oscar nominated picture 'The Country Girl' are also contained on this CD:

You can buy the great CD directly from Sepia Records:
SEPIA RECORDS
Posted by David Lobosco at 4:11 PM