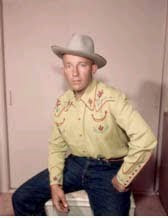 Here is a really great article I found. I have never been out west, but this article makes me want to visit Nevada. Bing truly fell in love with the area...

How many of you have heard of a show called “The American Sportsman,” hosted by Curt Gowdy? If your family was like mine, the show was a ‘must watch’ on Sundays. My favorite episode was when Curt Gowdy, Bing Crosby and Phil Harris went dove hunting in Africa. Most people knew Bing Crosby as a famous singer and actor, perhaps best remembered for his beautiful version of “I’m Dreaming of a White Christmas.” But most don’t know that Bing Crosby was an avid hunter and fly fisherman, and even fewer knew him as an Elko cattle and horse rancher.

Bing bought his first Elko ranch in 1943 and purchased a total of seven in the Elko area, the 7 J’s, Circle S, PX and the Spring Creek Ranch were among Bing’s favorites.   Bing bought the ranches not only as an investment, and a place to go hunting and fishing, but it was Bing’s plan that his three sons would learn the ranching trade and eventually take over the ranches. It was his hope that working on the ranch would keep the boys from becoming spoiled Hollywood brats and keep them out of show business.

When Bing wasn’t in Hollywood, Elko was his home for over 15 years. 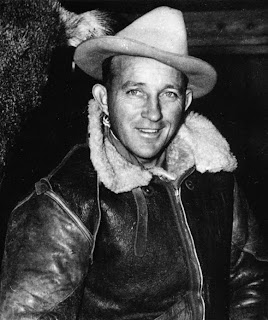 He was always there for his community and neighbors so much so that in 1948 Bing was made honorary mayor of Elko. He was the first person in Nevada history to be made an honorary mayor. When Elko honored Bing as mayor, they decided to make the ceremony into a three day event, which raised over 10,000 dollars for the Elko hospital. That same year, after a 13 year hiatus, Bing was instrumental in promoting the now annual Silver State Stampede Rodeo in Elko.

Bing helped many Elko businesses through-out the years, but when he premiered his “Here comes the Groom” movie in Elko it brought people from all over the world. The movie event literally put Elko on the map.

Personally, Bing thought one of the biggest honors he ever received was when he was made the first and only adopted member of the Shoshone-Paiute tribes in Owyhee, Nevada, By the way, I found out the correct pronunciation is “o-wa-hee.” Bing had a ranch in the area that he visited frequently and helped the tribe on many occasions; he admired the tribe and its people for their hard working, independent character. When Bing was adopted into their tribe, they gave him a new name; Bing became “Man of many songs.” Bing was not an emotional man, but on this day, he was so honored, it was one of the few times Bing Crosby ever cried. 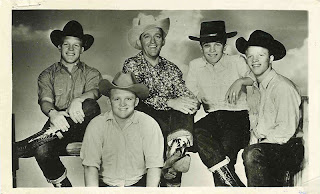 Although Bing’s sons did work as ranch hands for many years the lure of Hollywood finally was too much for the boys and none of them became Elko ranchers.

When Bing’s beloved wife Dixie died in 1952, his interest in northern Nevada dwindled and he sold all his ranch properties in 1958. He truly loved Nevada, but he had shared all of his Nevada memories with Dixie and returning only reminded him how much he missed her.

Bing left his mark on northern Nevada in a big way. Bing Crosby was a true American sportsman and a proud Nevadan... 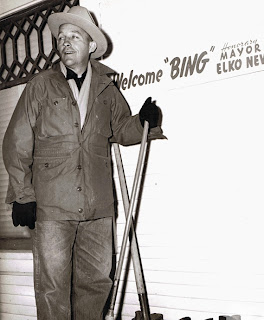 SOURCE
Posted by David Lobosco at 5:43 AM