Here is an excellent story on Geoff Milne, who was one of Bing Crosby's music producers. This is from a 2010 story... 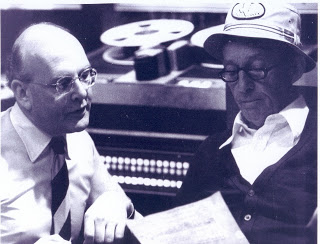 “It was almost through Bing Crosby that I came into the music business to start with,” says producer Geoff Milne.

“I started collecting his records in Germany in 1946. I was in the RAF and had been seconded into the entertainment division, where I ran a record library. People from other divisions would come in to borrow Bing records – even from the army divisions. He was very popular.”

After leaving the RAF, Geoff spent three years at British Airways, before deciding he’d be happier elsewhere. “I was brought up with music and films,” the 85-year-old says. “I can recall standing on a chair pretending I was conducting the afternoon broadcast from the Savoy Theatre.

“In 1950, only EMI and Decca were around, of any substance, so I made a nuisance of myself and Decca gave me a job to shut me up. I started in the accounts department, though my aim was to get to the artists department as soon as I got in – and I had determination.”

When Geoff joined Decca in 1950, Bing had been at the company for 20 years. “Crosby was a permanent artist on Decca and the company had been associated with his records since 1930,” he says. “Decca were interested in promoting him rather specially because of the longevity of his tenure.” Ultimately Geoff rose to be the manager of Decca’s London American label, spending more than 30 years at the company. It took until 1976, though, for him to meet the man who’d inadvertently launched his career in the industry.

Bing had come to England to create a spoken word, three-LP box-set, The Adventures of Tom Sawyer, with Geoff working on the sound effects. While Crosby was there, Geoff had snapped up his latest record, A Southern Memoir.

“He said nobody wanted it. He had run out of steam, as far as the record labels were concerned,” Geoff says. “I knew John Scott Trotter [Crosby’s regular accompanist and director], whom I’d met in America, and he told Bing I would be interested.”

Having released the album, Geoff was given the chance to produce a new Crosby record: 1976’s Feels Good, Feels Right. “One can get very blasé about this sort of thing, but it was quite an event to meet him,” Geoff says. “It was very pleasant seeing him. I was always interested in Crosby – he was a bit of a legend, a little bit special.”

Geoff says being in the studio with the singer was a memorable experience: “It wasn’t just a job. It was exciting, in a way, listening to him. It’s hard to explain, but he was a man who had been singing since 1926 and he was still going strong – he had an incredible track record.

“He went through a period in the 1950s when he sounded a little bit tired and the records didn’t sound as good, but he seemed to recover from the early ‘70s onwards – there was a new timbre to his voice.”

The first step was to decide which songs Crosby would record, with Geoff driving up to the singer’s rented house at Holland Park to talk over possibilities. “We were going through all sorts of titles in the flat,” he says. “He knew most of them, having probably sung them on the radio at one time or another. But I remember having to sing one of them for him, and him saying: ‘That was very good – you ought to record it’, very much tongue-in-cheek.”

And Geoff did get a chance to croon in the studio, as Bing struggled with one particularly tricky melody line. “There was another song, either Rose in Her Hair or Old Fashioned Love, where he couldn’t get the melody quite right and had to reminded of how it went,” Geoff says. 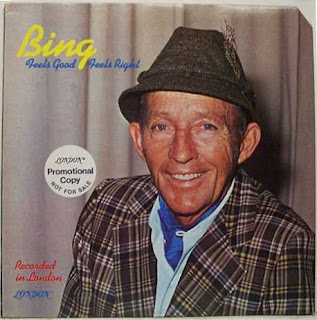 “If you look on the back of the LP, there’s a photo of me singing to him, because he couldn’t get it right. Everybody found that very amusing. I suppose even the master professionals can have their weaknesses.”

Mostly, though, Geoff was taken aback by just how easy Crosby found the process. “The actual recording didn’t take very long,” he says. “Myself and the studio producer Kevin Daley suggested titles and Bing usually went along with what we had to say.

“He could nail a song in the first go. If you did it again, it was just a safety, just to be sure. I often heard the first take and thought: ‘How’s he going to improve on that?’”

The album was recorded in one three-day period in July, with a second session at the start of August where Bing recut four songs he was unhappy with, using a different style and tempo, including one that never made the record – That Old Black Magic. Geoff’s favourite song from the record is the enchanting, dreamy closing number. “The song that stands out from those sessions is When I Leave the World Behind,” he says. “He liked that song; I remember when we talked about it. Al Jolson had made it famous and we thought: ‘Hmm, is it the right sort of material?’, but Bing was convinced it was, and he was right.”

Geoff says that while Bing was “practical” and “no mug”, he had much in common with the happy-go-lucky persona he cultivated in films and on records. “He wasn’t particularly interested in money,” Geoff says. “We signed contracts with him for a very nominal amount. He was just happy to be working.”

Still, it wasn’t always easy for the singer to fit in studio time along with his other commitments. “Golf was more important to him than singing,” Geoff says. “We were fixing duties for the studio and he would say: ‘I shall be at the golf that day’ – that always came first.” 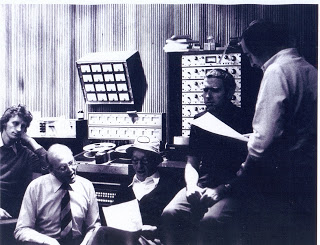 The singer used his trip to the UK to pursue several hobbies, going grouse-shooting near Ripon in North Yorkshire, playing cricket with youngsters at the High Side playing fields in Kirkby Malzeard which he had helped build, and attending a golf championship in West Sussex. While Crosby was in the country, Geoff did his best to make the star feel at home. “Bing used to come in with all sorts of requests,” he recalls. “That included getting hold of some records of bird noises for his wife Kathryn.” Feels Good, Feels Right was released during a major upturn in Bing’s fortunes.

“It did quite well in sales,” Geoff says. “Bing was in the middle of a resurgence of interest – people were saying his voice was even better than in the ‘50s. He was more relaxed. He had done a concert – two or three nights at the London Palladium, and that had sparked this big interest. By general consensus he was singing very well indeed.”

Geoff remembers Crosby as “a very down-to-earth sort of man”, matter-of-fact and unfailingly polite. “I remember while we were in my office, a West Indian waitress brought some drinks in, and he was up there like a shot to take the tray from her and thank her,” he says.

“He was on his feet instantly, a man of his stature. I can think of many artists who wouldn’t have moved.” Though the company tried to keep Bing’s visit quiet, word inevitably leaked out, with vast numbers of fans visiting the studio. “There are some who hate signing autographs, but Bing would sign anything,” Geoff says.

“He said when people stopped asking for his autograph, that would be the time to worry. People were constantly knocking on the office doors, but he never refused them. That just shows what kind of a man he was.”

Bing died on the golf course on October 14, 1977, meaning that a trio of planned albums with Geoff never saw the light of day. “When he died, we had already got a second LP all worked out,” Geoff says.


“He was going to sing an album of Noel Coward songs next. We had decided that two or three titles would just be with Keith Nichols’ piano accompaniment, which was a bit of a departure for that period. I had a complete itinerary worked out.”

The musicians had already been booked for the session when Bing passed away. “If you booked them, you had to pay a fee,” Geoff recalls. “Not a full fee, but a fee. The musicians came and said: ‘We’re not charging anything’, because they were so upset that they would not be doing the record. I think that’s the first time that had ever happen."

Geoff says the action illustrated just how other musicians felt about Bing. “I thought that was one of the finest tributes given to Bing Crosby – that showed what esteem he was held in by other musicians,” he says.

“He was very much a musician’s man – he would be in the studio with the orchestra as they recorded. It was a wonderful gesture.” As well as the Coward record, Bing had planned to make a Dixieland album with brother Bob Crosby’s band and return to the studio with friend and sparring partner Bob Hope, with whom he’d appeared in the popular ‘Road’ movies.

“The titles were set out and we’d talked about it. He said: “Bob Hope? Leave that to me.” In the years since Bing’s passing, Geoff has had a chance to work on more Crosby records, releasing numerous compilations, complete with scrupulously-detailed liner notes for the Jasmine label... 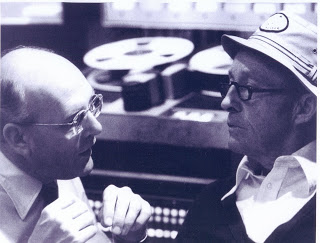 Posted by David Lobosco at 5:03 AM