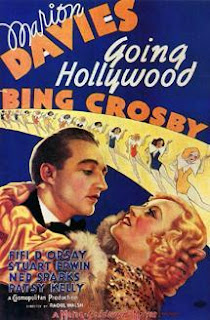 One of Bing fan said that this film was essentially about stalking. I had never thought of it in those terms, but it's true.

Marion Davies is a love starved French teacher at a girl's boarding school who's spare hours are taken up with the radio crooning of Bing Crosby. She follows the object of her affection out to Hollywood and in Hollywood cliché style gets her big break in the movies.

First if you're willing to accept the beautiful Marion Davies with this crowd of old spinsters at the boarding school then the rest of the plot simply follows. Second for Bing Crosby fans one has to remember that this is NOT a Crosby picture. He's the leading man in a Marion Davies film. Everyone is familiar with William Randolph Hearst and the Svengali like influence he had on her career. Marion's making a musical so you go out and buy the hottest singer currently as her leading man. And that, boys and girls, is the story of Bing's first film away from Paramount.

You also hire a topflight director in Raoul Walsh to keep things at a brisk pace. And you give Marion a good supporting cast that includes Fifi D'Orsay, Ned Sparks, Stu Erwin, and Patsy Kelly. Mix 'em together and you got Going Hollywood.

It's not a bad mix. Crosby had a lot of songs in this film. The big hit was Temptation, but there were other good ones from Nacio Herb Brown and Arthur Freed. One thing however, since this was not Paramount and MGM was known for the great production numbers in their films, Bing got some great numbers. I'm surprised frankly that Hearst allowed Crosby a huge number like the title tune, set in Grand Central Station, without Davies in it. Davies does join him in a dream sequence where she sings a couple of lines of We'll Make Hay While The Sun Shines with Marion and Bing dressed as a pair of Grand Wood rustics. Another big production number that Paramount would never spend the money for. 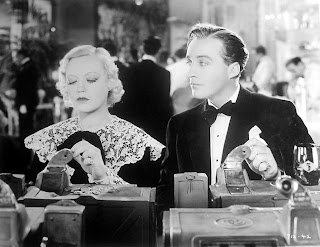 Davies had good if limited talents. Hearst however could only see her as a pure heroine. Since he discovered her in the Ziegfeld Follies, Davies's dancing should be no surprise. It's at least as good as Ruby Keeler's. She had a good gift for mimicry, her imitation of Fifi D'Orsay is a key point in the plot. One thing that would be considered in god-awful taste now is her donning black-face to get on Bing's movie set and imitating the dialect.

It's funny though. Think about pictures like Play Misty For Me and The Fan made two generations later. Stalking was looked on entirely differently back in those more innocent days...

Posted by David Lobosco at 5:42 AM