Here are some great quotes from Bing Crosby through the years. He talks about many things from family to his career. I think it is very fascinating...


HIS OSCAR WIN:
"I'd been nominated, so I knew there was a chance, but I just thought it was a kind of popularity award. I'd done some charitable things, a lot of shows, benefits, I was a golfer and that was that. It was a war year and all the good talent was away and I figured they reckoned "give it to this guy -- he's not a bad fellow." (Thompson, p111) 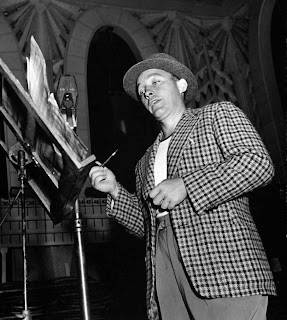 FIRST WIFE DIXIE LEE:
"She was a very fine woman. I was devoted to her. She was very timid, terribly shy. It was awfully difficult to get her to make any kind of public appearance and that was the reason she never did anything more in show business. She just hated the exposure and the necessity to work with strangers .... When she did get to know anybody she was a marvelous friend and a great deal of fun." (Thompson, p172)


FATHERHOOD:
"My situation as a father is maybe a bit more complicated than that which faces most dads. Raising the sons of a movie star presents special problems. When the children of people prominent in show business go to school or to entertainments or to parties, the solid, well-grounded kids they meet at those places pay them no special attention, but there's always a bunch of bubble-heads who make a fuss over a boy whose father or mother's name is known in the entertainment world. "With all the money your old man's got, you'll never have to work," they tell him. Or, "you mean you've got only one car?" and they ladle out the old goo. If the kid who gets this treatment is a little susceptible -- as some of mine are -- such guff can spoil them. My slant on such buttering up is this: there's an old Italian proverb which says, "Never kiss a baby unless he's asleep...." When I want to be especially flattering to one of my offspring, I say, "Nice goin'" and let it go at that." (Call Me Lucky, 1953, p203)


FRANK SINATRA:
"Frank's hotheaded, he does things that get him into the papers, but if he likes you, you've got a friend whose friendship is fanatically loyal. If he likes you, he'll do anything for you or give you anything he's got; but if he doesn't like you, he can be the most ornery cuss you've ever known. And it doesn't lake him long to find out in which classification he places you. He hates pomposity and he hates anyone in authority who he doesn't think is qualified to have authority. And he'll go to great lengths to make such phonies uncomfortable." Saturday Evening Post, May 11, 1957, p120) 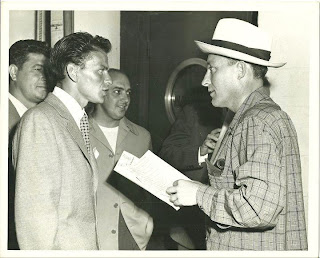 ROCK 'N' ROLL:
"Let's talk about what rock and roll is. It's really a new name for an old musical medium. Years ago they called this kind of music 'race records.' By that they didn't mean Negro music; they just meant blues. Then gradually, the name changed to rhythm and blues; now it's called rock and roll.... The beat's old too. It's a rolling bass repeated over and over under a blues melody. Maybe the beat is accentuated a little more; maybe those who play it put in more variations on their rolling bass. They always have their right hand high up on the piano, playing triplicates as fast as they can. It's got a flavoring of boogie, but it always has that basic rolling-bass pattern. If you try to say the beat in words, it comes out 'shoo-beedoo-bee-doo." (Saturday Evening Post, May 11, 1957, p119)


THE DEATH OF ELVIS:
"Oh, I'm shocked. It's a sad thing to hear. A young man like Presley, just a young fella, so vibrant, so influential all through the years of American popular music and now you tell me he's gone. It's hard to believe. It'll be a great loss." (NBC news interview 16 Aug. 1977)


ANNOYANCES WITH FAME:
"The sycophants that hang about, the press, the photographers, the song publishers and pluggers and the pests of all descriptions that grab me everytime I step outside my front door weary me indescribably. Succinctly, John, I seem to have had it. Maybe a year or so away will make me feel differently, and my interest will revive." (1954 letter to John Scott Trotter) 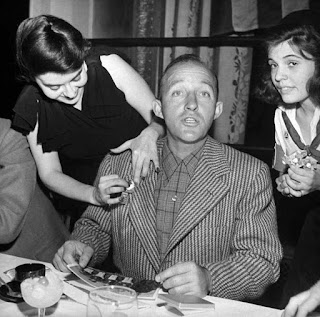 Posted by David Lobosco at 3:02 AM