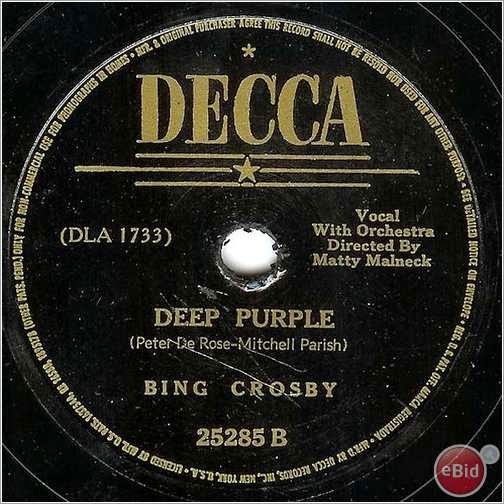 The pages of the new Wiggins-Reilly Crosby discography have me looking through my Crosby 78s again, handling them, peering at the labels, worrying about their fragility...and more and more dying to play them again. I recall that when I grew up the first records I ever remember seeing in our house were about 21 78s my brother was given by our maternal grandmother. These were perhaps half of the records my mother and her younger siblings had grown up with on a tiny farm about 20 miles from Quincy, Illinois, where they played what records they had on a wind-up Edison player.

At the time, we had a single-speed (78-only) electric record player. We didn't have a three-speed record player until around 1958 or 59 when my father made one for my brother's birthday present. My father did construction and steel fabrication, but as a hobby tinkered with electronics. Sometimes people gave him radios and other equipment that was broken. My brother's "new" record-player-am-radio combination was made out of parts from two units that my dad repaired an mounted together in a painted wooden case he designed for it. It had a flip-over cartridge, and as mentioned before three speeds, so now we not only could play those 78s, but my brother (who was about 12 or 13) could start to buy and play rock-and-roll 45s and Mom could get that Guy Lombardo LP she saw on the small record rack at the grocery store.

I was a bit too young and butter-fingered to handle the records at that time, but I remember that around the time I was about 11 years old, I had become very interested in those 78s again. The old single-speed record player had migrated to a little table in the basement of a different house, in a different town, and I recall spending hours sometimes playing through that stack of old 78s from the farm. At least one platter was a Crosby: "God Bless America"/"The Star-Spangled Banner." There were other pop tunes, as well as novelty tunes and some country-western. I would play through the stack in order, over and over, but sometimes I would play certain sides again and again before moving on. Then I found a dusty table top Victrola at a thrift shop. It was about 10 or 12 dollars. The spring was broken. It could only play part of a record before running down. 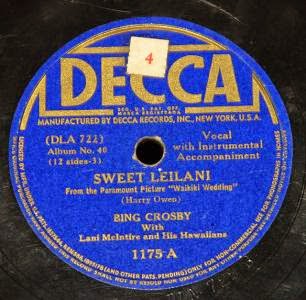 When I got it home and tried to wipe the dust off of it, I found that it wasn't only dust. The outside finish was so worn that it was gray. But when you opened the lid, the inside was nearly pristine. Opening the lid was as dramatic as the scene where Dorothy steps out of black-and-white photography into the technicolor of Munchkinland inThe Wizard of Oz. But, in this case, it was like opening the door on musical history. It took weeks, but I repaired the spring, which had become unrivited on one end inside of its drum, and I restored the outside finish, and I found where I could still buy steel needles for it. Now, I could hear what those old 78s sounded like down on the farm in the 1930s and 40s. When they are not terribly worn out, the richness of 78s played on totally acoustic equipment is surprisingly rich and impressive. And if you want more power, just open those two little doors on the front of the Victrola farther!

Around the time I got the Victrola and was a freshman in high school, I started actaully collecting records. Let me be clear, I had a very few rock-and-roll 45's and Lps, but I couldn't afford to collect them. My pocket change was what I saved out of my school lunch money. It would take weeks of savings to buy an LP. But I could often get a 78 for a nickel, sometimes less, at a thrift store or garage sale. The 78s collection grew. By the time I was out of college and married, people were giving me 78s rather than throw them away. How many total were amassed? 600? 1200? Do I even know? 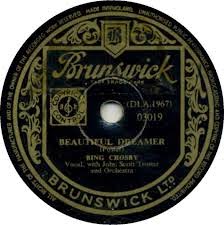 Was it a Bing Crosby collection? No, not at first, but there were nearly always Crosby records among the records available, wherever it was I was finding more 78s. And I did form the habit of looking for more records by artists I already had on 78 and liked. Because of Bing's popularity in the 78 era, merely that practice made the Crosby collection segment explode, compared to any other artist or group in this very, very eclectic collection. So, now, maybe there are 70-80 or even somewhat more Crosby disks, with of course some duplication and a few not really playable anymore. Not at all impressive, if I had been focusing only on collecting Bing, true, but it means a lot to me. And while, a number of his hits are included, it is remarkable how many of the sides are songs that never appear on the usual CD compilations. But, I think, listening to them is a little like what you would hear if you could randomly go back into mid-American households during any of the years between the mid-1930s and very early 1950s and hear what they had been buying and listening to. If Bing sang a song, it didn't always have to be a big hit for people to want to hear it again, and more often than they could hear it on the radio.

So, I've caught the 78 bug again, not the measles or the flu. I just ordered a new needle the right size for 78s for the cartridge I now want to keep on my turntable, which does have the 78 rpm speed. The needle will be here in a few days. I can hardly wait. Will the 78s be a little noisier than the LPs? Sometimes, yes. It is helpful to imagine that's just the sound of someone frying bacon while you're listening, or to hear what's in the background as a sound created by ordinarly people, not always replacing worn phonograph needles on their old Victrola or Philco, loving that song to death, playing it over and over. Not to worry, though--Bing's voice never fails to penetrate any background sizzle. It's not like Rudy Vallee's... 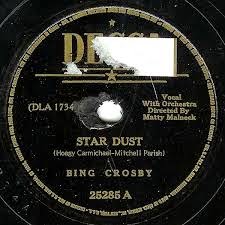 SOURCE
Posted by David Lobosco at 6:59 AM