Here is a program advisory for the forthcoming Thanksgiving weekend for the next "Star Spangled Radio Hour." It will include the Thursday, November 23, 1944 (Thanksgiving evening) "Kraft Music Hall" broadcast with Bing Crosby, Eugenie Baird, the Charioteers, John Scott Trotter and his Orchestra, Charles Henderson and the Kraft Choir with guest Rise Stevens of the Metropolitan Opera.

This is very a timely and heartwarming musical program presented in the typically well-produced, breezy and light Crosby manner and broadcast from NBC in Hollywood. On a more serious note, Bing references his recent trip to France and the importance of the American troops fighting "in western France, eastern Germany or wherever it is" and supporting our forces with the Sixth War Loan.

Bing's comments are very thought provoking juxtaposed against our "modern" world of 2012. Der Bingle had just returned two weeks earlier from his tour of the front lines in France, successful tour of England, travels with Fred Astaire and appearances with Major Glenn Miller and units of the American Band of the AEF...

Listen to the broadcast: HERE 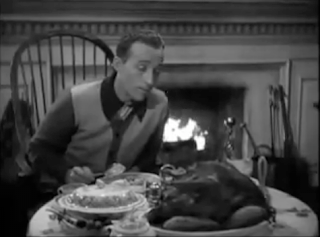