The best seat in the house at Del Mar racetrack, 20 miles north of San Diego, is a wooden bench inside the clubhouse gate, under a shade tree and beside a gurgling fountain. That's where I found the former jockey Larry Gilligan one Thursday afternoon. His hands folded across a well-tailored sport jacket, he'd settled in to watch a parade of women, young and old, glide past in their summer finest. Equally resplendent (though less meaningful to Gilligan) were the gentlemen in suit jackets and colorful ties walking beside them, for the track's Turf Club is perhaps the only restaurant in all of Southern California where semiformal attire is required to get lunch.

Del Mar's seven-week meeting each July to September won't usually feature the nation's tip-top horses or jockeys; those are camped out across the country in Saratoga Springs, New York, where the milling crowds are postmillennium sloppy in T-shirts and shorts. It doesn't attract the most fervent gamblers, who favor Hollywood Park up the freeway, if not the glow of a computer screen in their basement. But Del Mar is one of the few tracks left where horse racing still feels glamorous.

Del Mar's grandstand was rebuilt in the early 1990s and amenities have been updated since, but the track has the same enticing languor—a sense that, as the late racing publicist Eddie Read put it, "nobody is in a hurry but the horses"—as it did when cofounder Bing Crosby, wearing a yachtsman's cap and smoking his trademark pipe, opened its gates in 1937. "I find the experience incomparable," says Andrew Beyer, the Washington Post's turf writer, who can't resist the occasional cross-country jaunt for a week beneath the palm trees. "I love the weather, the beautiful women, the comfort of the grandstand. There's just nowhere more fun to spend a day at the races." 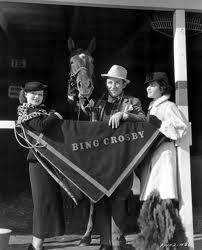 Plenty of racing fans seem to share Beyer's sentiments. Despite the sport's drooping ticket sales, Del Mar's attendance has grown by 25 percent over the past decade. Last summer's Opening Day crowd of 45,309 was its largest in history, and throngs of more than 30,000 are not uncommon on weekends. Even then, it still manages to feel more like someone's fabulous outdoor wedding reception than a typical sports event. "It's an aura that these people bring with them," says Trevor Denman, who has served as the track announcer at Del Mar for more than a quarter-century. "The majority are on vacation, and they have this happy atmosphere about them. It's totally different from any other racetrack."

Del Mar's executives believe they've engineered this miraculous popularity with modern marketing, a Friday concert series that attracts a younger demographic, signature drinks, all of that. I'm not so sure. Plenty of storied tracks haven taken a similar approach of promoting everything but the actual racing, yet apart from events such as the Triple Crown races and the Breeders' Cup, attendance at many of them remains in a death spiral. One problem is that wagering, which once required actually showing up at the betting window, has become too accessible. Notes Beyer: "When you can watch the races live from your living room and bang in your bets on the computer, the convenience is much more desirable than the hassle and expense of going out to the track."

It takes a special ambience to overcome that. Standing by the immaculate grass oval of Del Mar's paddock on a perfect summer afternoon, I couldn't help but think that nothing sells horse racing so much as the horses. Every one that strutted past seemed ready to step on the track and challenge Seabiscuit (who nosed out Ligaroti in a 1938 winner-take-all race here that captivated a live national radio audience). "The good ones know they're good," says Denman. "They seem to say, 'Let me loose, I'll show you what I can do.' When you see that in an athlete, whether an animal or a man, it's an amazing thing." And when you don't have to worry about whether they're secretly on steroids, or cringe when they fumble their way through a Gatorade ad, it's that much better.

In fact, much about my two-day visit reminded me of the way sports used to be, before excessive packaging and special effects made the experience of attending an event feel very much like watching it on television, only in less comfortable chairs. Part of that is the nature of horse racing, but a lot is the nature of Del Mar. Ad signage is kept to a discreet minimum. And it doesn't hurt that people dress up. It reminded me of black-and-white photos of baseball crowds from the '40s, or the scene in Billy Bathgate when the surpassingly elegant Nicole Kidman visits Saratoga. 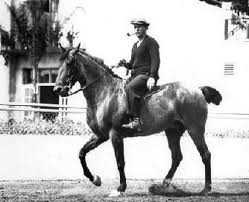 Instead of the pounding beat of Megadeth, or whatever it is that blasts from the sound systems in stadiums and arenas these days, I almost felt like I could hear Crosby crooning off in the distance. Wait, it actually was Crosby. The track begins each racing day with his reedy rendition of its iconic theme. "There's a smile on every face, and a winner in each race," he sings, "where the turf meets the surf at Del Mar."