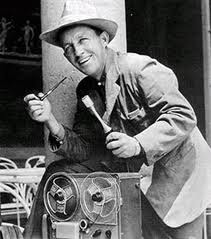 Some celebrities aren't just pretty faces. A few of them are also touched with that Yankee prowess for tinkering and invention. In this weekly series, we introduce you to the Patents of the Rich and Famous. And maybe you learn a little bit about how patent literature works along the way.

Known For: With his distinct baritone, Bing made his mark as a crooner back when that kind of music was popular. He represents a more wholesome time in American history -- before rock 'n' roll corrupted our youth with talk of sex and drugs.

It's a holder for the string that opens and closes window blinds.

A holder adapted to develop a frictional resistance between a sash and a window frame sufficient to hold the sash in a selected position, but insufficient to prevent the sash from being raised or lowered.

Rationale Behind Invention: We've all struggled with blinds. Those two strings that have the weighted balls at the end don't make sense -- they're testy and always seem to break. Having wrestled with his fair share of window treatments, Bing invented a holder for the sash. The device is designed to stymie any wear and tear on the mechanism and still allow the shades to be drawn: 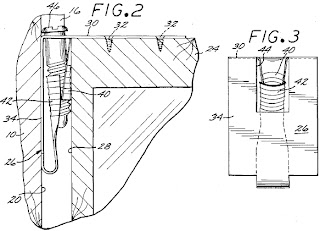 Off-Label Uses: Users would probably tie other unruly strings to the holder -- like the one attached to the ceiling fan -- just because, well, who could resist?

Future Directions: During the summer months, figuring out just the right balance between windows open and shades drawn is key to keeping your home cool. You want a nice breeze, but the sun can really heat up a room. Bing should install a temperature control that tells the user the right window/blind combination for optimal comfort.

SOURCE
Posted by David Lobosco at 10:48 AM