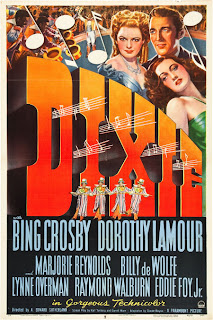 Here is a review of the now controversial film DIXIE from the New York Times on June 24, 1943...

A NEW BIO PIC WITH BING CROSBY
by BOSLEY CROWTHER

Gentlemen (and ladies), be seated—at the Paramount Theatre, that is to say—if you are interested in some old-time minstrel capers tossed off in a Technicolor film. For songs and jigs and funny sayings are what Paramount is delivering about 40 per cent of the time in a ruffled and reminiscent picture entitled "Dixie," which came to that theatre yesterday. Otherwise the remainder of the picture is mainly and not so spiritedly absorbed in a largely fictitious story of Dan Emmett, the original "Virginia Minstrels" man and the author of the rousing song "Dixie" —a role which the old booper, Bing Crosby, plays.

When the minstrels in their shiny, long, white trousers, swallowtail coats and high silk hats are jabbering and kyaw-kyaw-kyawing and flinging their lithesome legs around, the film has a fitful exuberance. Raoul Pene du Bois has dressed them up in brilliant clothes, and a quartet of uninspired writers has raided the warehouse for some old but safe jokes. And when Bashful Bing is warbling such sparkless but adequate songs as "Sunday, Monday or Always," "She's From Missouri" or "A Horse That Knows the Way Back Home," it is easy to sit back and listen. There is also a dash of liveliness in the wholly apochryphal climax which pretends to show how "Dixie" was born. 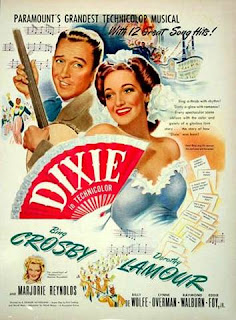 But when the story goes weakly meandering into a pointless, confused romance between Dan and a New Orleans hoyden, played airily by Dorothy Lamour, and then marries him off to an old sweetheart who is crippled (Marjorie Reynolds), it is labored and dull. (Miss Lamour doesn't do any singing; just flounces around and plays straight.) Raymond Walburn, the late Lynne Oevrman and Eddie Foy Jr. puff and prance as minstrel men in a manner which is more entertaining than that of a newcomer, in a parallel role, named Billy de Wolfe. Mr. de Wolfe, with some coaching, might do in an amateur show, but he is definitely a minus quantity in a spot generally filled by Bob Hope. 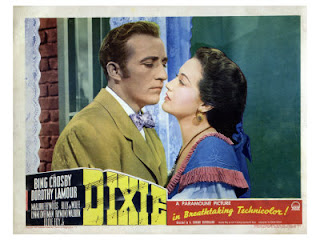 Indeed, the fact is that none of the picture has the jubilating spirit and dash that should go with an old-time minstrel story. There's a great movie in that subject yet. And Paramount had a nerve to make a picture in which Bing—and he alone—has one hit song...

SOURCE
Posted by David Lobosco at 6:37 AM