Why this is only being released on BluRay is beyond me. I like High Time but not enough to buy a new player for... 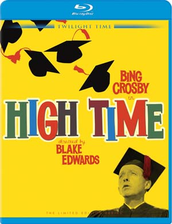 In an early announcement to retailers, Twilight Time will be bringing 'High Time' on Blu-ray on August 14.


Widower and hamburger restaurateur Harvey Howard decides to go to college at 51 years of age. Resisting the easy path, he insists on not receiving preferential treatment, and lives in a dorm like the other students despite the disapproval of his grown son and daughter. As the years pass, and he gets involved in study sessions, fraternity initiations, and sporting events, he begins falling in love with Professor Gautier, the French teacher, but doesn't consider re-marrying appropriate.

The Blu-ray will be limited to 3000 units and will feature 1080p video, a DTS-HD Master Audio 4.0 soundtrack, and supplements include an isolated score track by Henry Mancini and the original theatrical trailer.

Suggested list price for the Blu-ray is $29.95 which can be pre ordered here.

You can find the latest specs for 'High Time' linked from our Blu-ray Release Schedule, where it's indexed under August 14.

SOURCE
Posted by David Lobosco at 4:26 AM