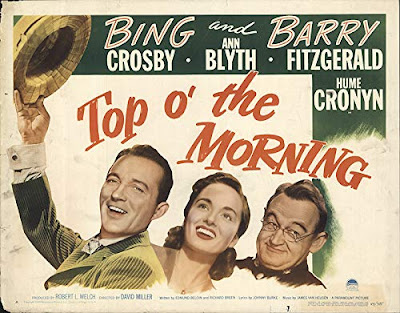 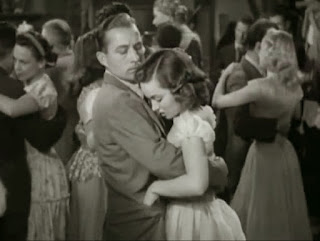 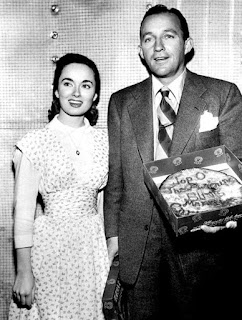 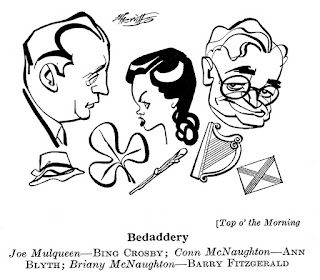 Posted by David Lobosco at 5:27 AM No comments:

BING ON FILM: TOP O' THE MORNING - PART ONE 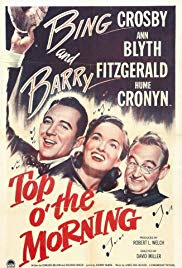 It is easy to review and write about High Society or Holiday Inn, but I wanted to look at a film that was not as remembered as other Crosby films. So that is why I picked Bing’s 1949 Top O’ The Morning. I have had the film on a bootleg DVD for years, but I just never could bring myself to watch the film. I am not sure why, but I finally viewed the film, and it is not too bad. It is not great either.

After making some great Technicolor vehicles like Blue Skies and The Emperor Waltz, Top O’ The Morning looks drab and boring in black and white. I don’t know how Paramount could make a movie about colorful Ireland without the film being in color. The plot is slight, and at times I surprisingly find the movie hard to follow. Although the film has a marvelous cast, it is only mildly entertaining, with the story stumbling along in fits and starts, though it does pick up speed in the last half.  Crosby plays a New York insurance investigator sent to Ireland to search for the missing Blarney Stone. Yes, it's been stolen! Barry Fitzgerald plays the ineffectual police sergeant in a nearby town, with Blyth playing his pretty daughter, Conn, and Hume Cronyn is his assistant, Hughie. John McIntire, who later appeared in Blyth's charming comedy Sally And Saint Anne (1952), plays a police inspector working on the case. 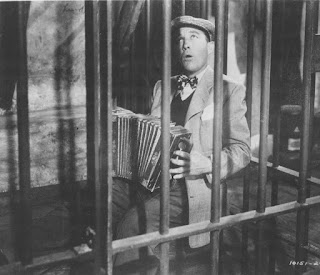 The original name of the film was supposed to be Diamond In The Haystack. Very little happens in this rather slow-moving film, which spends a great deal of time on the mysterious prediction of a townswoman (Eileen Crowe) regarding who will marry Conn; eventually, of course, the Blarney Stone mystery is solved and true love prevails. Even though I am of Irish decent, I did not really know what the Blarney Stone was. The Blarney Stone is a block of Carboniferous limestone built into the battlements of Blarney Castle  about 8 kilometers (5 miles) from Cork, Ireland. According to legend, kissing the stone endows the kisser with the gift of the gab (great eloquence or skill at flattery). The stone was set into a tower of the castle in 1446. The castle is a popular tourist site in Ireland, attracting visitors from all over the world to kiss the stone and tour the castle and its gardens.

Back to the film, Bing Crosby looked quite bored in the film as if he was going through the motions of a substandard script. I do not know if it was because of the age difference of Bing and his co-star Ann Blyth, but their pairing did not seem to gel to me, and they did not seem to have too much chemistry. Bing Crosby had wanted Deanna Durbin to costar in this picture as well as A Connecticut Yankee in King Arthur's Court (1949). Miss Durbin, about to retire from the screen with the finish of her Universal-International contract on August 31, 1949, declined both offers from Bing. In place of Miss Durbin, Universal loaned Ann Blyth to Paramount for this film... 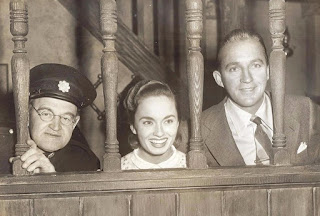