I usually don't post videos on my blog, but this is an interesting video which sort of eludes to some sort of Bing Crosby VS Jerry Lewis feud.

I doubt that is the case, but the video is interesting...

Club Crosby President Malcolm Macfarlane had this to say about it: "Jerry obviously has a selective memory as he has forgotten the times he subsequently golfed with Bing, had dinner with him in London and was invited to play in the Crosby Pro-Am. Bing and Dean Martin also gatecrashed the Eddie Fisher show on which Jerry was guesting in 1958".

Knowing how Bing was, he avoided people with swelled egos, and I believe that it was not so much a feud as Jerry Lewis was not the type of person Bing would want to hang out with... 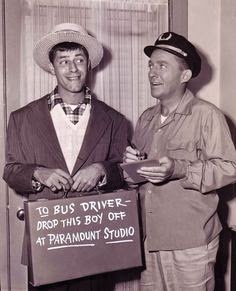 Posted by David Lobosco at 6:03 PM No comments: 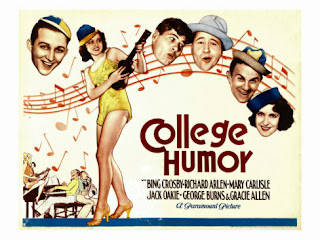 Bing Crosby made quite an impact as a leading man in his first feature film The Big Broadcast in 1932. Paramount Studios quickly signed him up to a contract and next up for Bing would be the college musical College Humor. In this film at least they had the decency to cast 30 year old Bing as a professor. As students they had 30 year old Jack Oakie and 34 year old Richard Arlen! This film was basically a Jack Oakie movie with Bing thrown in for added appeal.

Barney Shirrel (Jack Oakie) starts his first semester at Mid West University and works his way up in the fraternity with the help of Tex Roust (Joe Sawyer) and Mondrake (Richard Arlen), an alcoholic college football star. Barney is passionate about engineering and the law, and between his varied studies, football, and the fraternity, he neglects his girl friend Amber (Mary Kornman).

In the next term, Mondrake gives his class sweater to Barney's sister Barbara (Mary Carlisle). His drinking problem intensifies, however, when he learns that Barbara is falling in love with Professor Danvers (Bing Crosby), the singing drama teacher. When Mondrake fails to show up at an important football game against a rival university, Danvers finds him in jail. With the school's reputation at stake, Danvers has him released and takes him to the football field in time to play in the game. 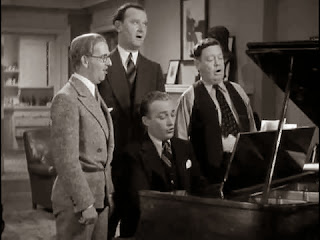 Afterwards, Danvers is called before the college president (Lumsden Hare). Although rivals for Barbara's affections, Danvers stands up for Mondrake. The college president expels Mondrake for drunkenness and forces Danvers to resign because of his involvement in the matter. Feeling guilty over causing Mondrake's expulsion, Barbara proposes marriage to him. Later, however, she admits that she is not in love with him, but with Danvers. Mondrake bows out of the relationship, and Barbara rushes to Danvers' side before he leaves.

During the next term, Barney has followed Mondrake's example and taken up drinking and smoking, which is not appealing to Amber. At the big football game, Barney is in sorry shape. Mid West is losing until he receives inspiration from Tex, who has returned to watch the game. After being knocked out, Barney recovers and wins the game for Mid West. 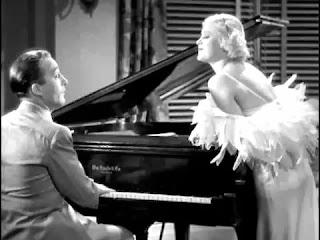 Some time later, Barney and Amber get married and they move to his father's dairy, where Barney works his way up from the lowest position. Barney and Amber enjoy listening to Danvers singing his song on the radio.

The best part of the film was Bing's singing, and he sang some good ones like: "Down The Old Ox Road", "Moonstruck", and "Learn To Croon". Another wonderful draw of the film is Mary Carlisle, who is with us as of this writing, at the age of 101. She is probably the last person alive who was involved in this 80 year old film. There was not enough Bing and Mary Carlisle, and too much Jack Oakie for my taste. The only movie I ever liked Oakie in was The Great Dictator in 1940. I loved my years in college, but I only remotely liked this collegiate offering. If it was not for Bing, this film would have been a horrible bomb... 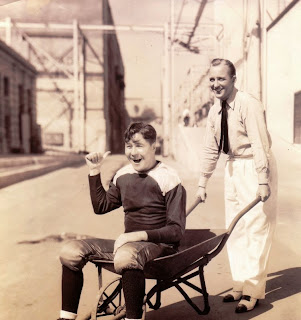 BING CROSBY: AT HIS PEAK

Here is a new Bing Crosby CD, from the label Sounds Of Yesteryear. Nothing really rare, but a great bunch of songs... 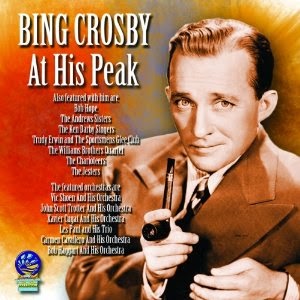 The year of Bing Crosby's peak of popularity was 1944. On this CD we have naturally included Bing's 1944 recordings but also his 1943 and 1945/6 recordings so that you can hear the build up to his peak and the slight slide in popularity too. We calculate that Bing had ten entries into America's popular music charts in 1943. He doubled that to twenty in 1944. His tally for 1945 was eighteen, a drop of only ten percent. Bing would often use other popular singers of the day to harmonize with him and that is the case on a lot of these recordings.

Posted by David Lobosco at 8:33 AM No comments: 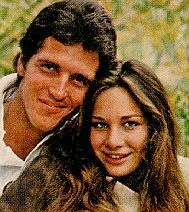 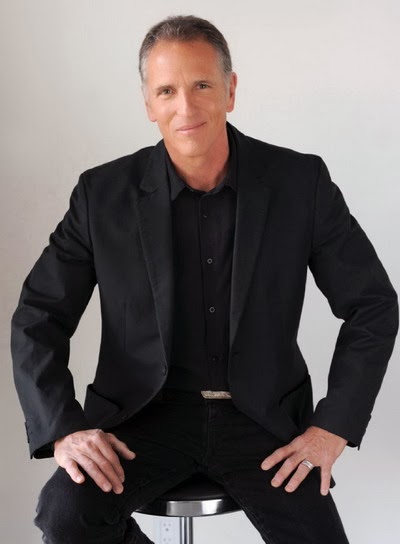 Posted by David Lobosco at 6:47 PM No comments: