BING ON FILM: ANYTHING GOES - PART ONE 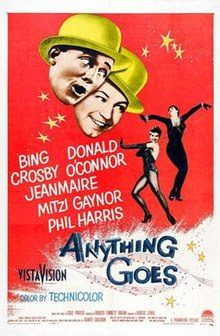 For this latest review, I figured I would review 1956’s Anything Goes. Bing Crosby’s co-star in the film Zizi Jeanmarie passed away last year at the age of 96, so I figured it would be fitting to watch something she was a part of. This 1956 film would be the last film Bing would make for Paramount Studios after being with them for 24 years! It remains the second longest contract for any star with any studio, only exceeded by Robert Taylor with MGM. The musical Anything Goes was a superb Cole Porter Broadway show when it opened in the 1930s. Since its 1934 debut at the Neil Simon Theatre (at the time known as the Alvin) on Broadway, the musical has been revived several times in the United States and Britain and has been filmed twice. The musical had a tryout in Boston, before opening on Broadway at the Alvin Theatre on November 21, 1934. It ran for 420 performances, becoming the fourth longest-running musical of the 1930s, despite the impact of the Great Depression on Broadway patrons' disposable income.

The movie was first filmed in 1936 with Bing Crosby and Ethel Merman, but it bared little resemblance to the Broadway show or this 1956 remake other than Bing in the film and a few Cole Porter tunes. The plot of this 1956 remake is also quite different than the Broadway show. The only that stayed the same was that most of the story takes place on a luxury liner. So the movie opens up with a veteran Broadway star (played by Bing) meeting an up and coming television star (played by Donald O’ Connor) at a party, and they decide it would be fun to star together in a Broadway show, with each guy thinking they are helping the other one’s career out. Donald O’Connor tells Bing that he doesn’t care who their leading lady is, but in reality, he does. Bing Crosby goes to see a blonde American who has been performing in Europe (Mitzi Gaynor), and he signs her to a contract. Meanwhile, Donald O’Connor takes it upon himself to sign a French ballet star (Jeanmarie). So, they now have two actresses signed for one role. For the rest of the film Bing and Donald try to figure out how to solve their problem. Donald falls in love with Mitzi, and Bing falls in love with the French ballet star. Then there is the typical movie twist where they lose the girl, and then Bing and Donald manage to get the girls back, revamp the plot of their show so they have two leading ladies, and live happily ever after. 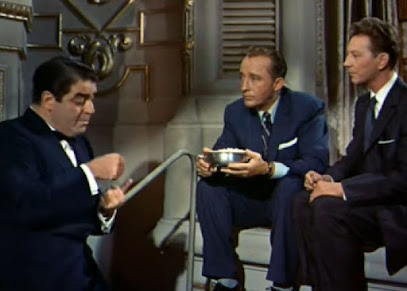 Bing Crosby and Donald O’ Connor were great together, and they went back together to the 1930s when Donald played Bing’s younger brother in 1938’s Sing You Sinners. They had tried to reteam for 1954’s White Christmas, but O’Connor broke his ankle before filming could begin and was replaced with Danny Kaye. Mitzi Gaynor is also great with both Bing and Donald. It was weird though seeing Mitzi Gaynor and Donald O’ Connor as love interests since they played brother and sister in the earlier film There’s No Business Like Show Business! Phil Harris was also in the cast as Mitzi Gaynor’s gambling father. He was the reason why the two were on the run in Europe to begin with. Phil was great in his role, but it was kind of small. Being one of Bing’s few close friends in the real world, and since he had such a great relationship with Bing, I wish they would have performed a number together. The problem I have with the film is Zizi Jeanmarie as Bing’s love interest. I just did not feel any chemistry between the two. Zizi was a gifted ballet dancer, and she was mesmerizing in the 1953 Paramount film Hans Christian Anderson, but other than her musical numbers, she did not add much to Anything Goes. She was hugely popular in her home country of France and was married to the choreographer of the movie, Roland Petit. Whether she got him his job on the film or visa versa, I don't know. However, she was totally wrong as Bing's love interest. She was a fine dancer, but the Cole Porter song "I Get A Kick Out Of You" was wasted on her limited vocal ability. Bing Crosby, in his Paramount contract, had co-star approval so maybe he wanted to try to reach out to a different audience, but I think the pairing of Bing and Zizi hurt the movie...
TO BE CONTINUED... 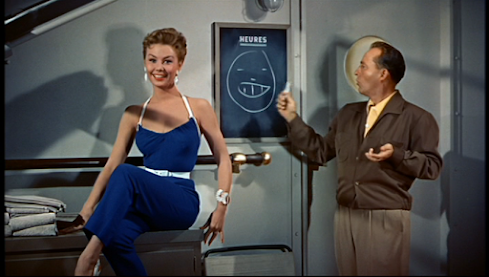 Posted by David Lobosco at 9:14 AM No comments: