Posted by David Lobosco at 5:54 AM No comments:

BING AND HIS LAST CHRISTMAS SPECIAL

Here is an advertisement for Bing Crosby's last Christmas special. It was aired after Bing's death. Bing looked frail but the voice was still there! 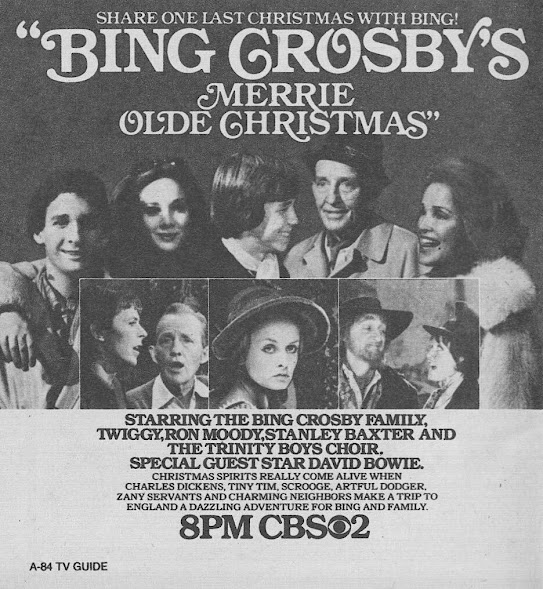 Posted by David Lobosco at 9:15 AM No comments:

Posted by David Lobosco at 4:31 AM No comments:

Posted by David Lobosco at 4:12 AM No comments: 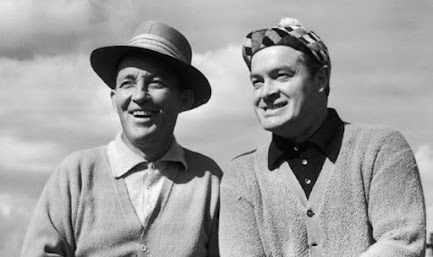 Bing Crosby and Bob Hope worked together in Hollywood for a number of years, establishing status as one of showbiz’s most beloved duos. Though the two stars were “different” in some ways, Bing and Bob were extremely “close” and “loved each other” very much, author Richard Zoglin said.

In a scene from 1942’s Road to Morocco, Bing confesses his affection for his buddy Orville, played by Bob. “I guess in my own way, I sorta love you,” the crooner said just seconds before an amorous camel stretches through the shrubbery to plant a wet kiss on Bob’s cheek. “All right, but you don’t have to slobber all over me!” quipped Bob.

Before the word bromance or the rise of cinematic sequels, Bing and Bob starred in seven sweetly funny Road to … movies that made them two of Hollywood’s biggest stars. The films followed a formula: The pair would get into trouble, wisecracks would fly, Bing would sing, and Bob would talk directly to the audience. “They were the most lucrative franchise in movie history,” Gary Giddins, author of Bing Crosby: A Pocketful of Dreams and Bing Crosby: Swinging on a Star, shares with Closer.

The pair met in New York when Bob, a then up-and-coming comedian, was invited to emcee one of Bing’s shows in 1933. “They hit it off and used to take breaks together where they’d trade jokes,” says Giddins. “They tried the best bits out on stage and became a big hit with the audiences.” 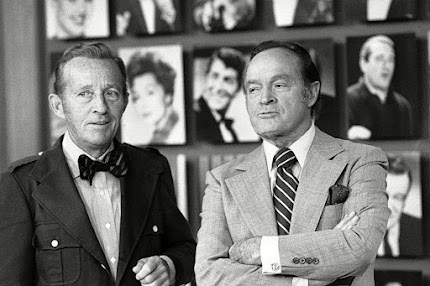 That chemistry was still intact when Paramount Pictures teamed them up for Road to Singapore, which became one of the biggest hits of 1940. But success didn’t make them immediate best friends. “They were very different men. Bing wasn’t gregarious and didn’t like the trappings of stardom, while Bob loved them,” says Richard, author of Hope: Entertainer of the Century. “I think, privately, Bob felt that Bing was a little aloof. He said, ‘Bing and his wife never even invited me and Dolores to dinner.'” On the set, there was also a friendly competition to come up with the best zingers. “They each had their own writers,” says Giddins, although “they never had a fight.”
It wasn’t until the filming of their last road comedy, 1962’s The Road to Hong Kong, that their friendship really blossomed. “They went to London to do the film and lived in the same house with their wives,” says Giddins. The costars began playing golf together. “Bob’s wife, Dolores, said that was when they first realized how much they really loved each other,” says Zoglin. “From that time on, they were very, very close.”

Bing and Bob had been discussing another movie, The Road to the Fountain of Youth, when Bing died of a sudden heart attack in 1977. “Bob was really broken up about it,” Zoglin says told us. Too emotional to appear on stage, he canceled his live performance that night for the first time in his career. “If friends could have been made for each other, I would have asked for one just like Bing,” Bob said. “I miss him.” 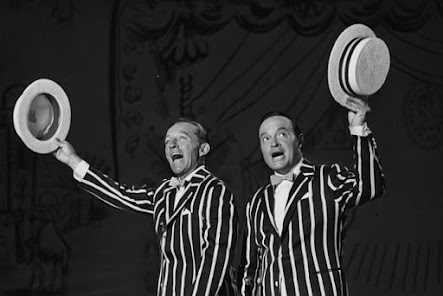 SOURCE
Posted by David Lobosco at 9:37 AM No comments:

Part 4 of this excellent series by David Duncan...
Posted by David Lobosco at 5:04 AM No comments: