BING ON FILM: DOUBLE OR NOTHING - PART TWO 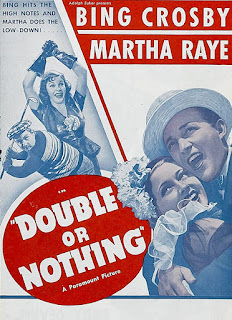 The film was shot quickly in Hollywood from April 26 to June 15, 1937, and even the though the story was much better than previous lighthearted Bing Crosby romps, the big draw of the movie was the music.  Bing opened the film singing “Smarty” – which was written by Burton Lane and Ralph Freed strangely enough and not Bing’s resident songwriters, Arthur Johnston and Johnny Burke. I love how Bing sang the song “Smarty” in the film, competing with an opera singing chef. This is the song that I remember recording with my little handheld recorder. Johnston and Burke wrote a bunch of other Crosby gems for the film like: “The Moon Got In My Eyes”, “It’s The Natural Thing To Do”, and my personal favorite – “All You Want To Do Is Dance”. Unfortunately, Bing never recorded a show stopping number commercially called “After You”. The song was written by Al Siegel and Sam Coslow, and in the film, it was sung by Bing, Martha Raye, Frances Faye, and Harry Barris. Frances Faye, who would emerge as a great jazz singer in the 1950s, played Martha Raye’s sister for the quick musical number, and for a long time I thought they were sisters. The number also marked the first time that Bing and ex-Rhythm Boy pal sang together on film since the Paul Whiteman opus King Of Jazz in 1930. I wish Bing would have recorded the song “After You”, and it looked like Tommy Dorsey and His Orchestra recorded the song, but it never became a hit.

The critics enjoyed the film, but for 1937 they were a little critical of Bing:

The New York Times - "It is a tuneful show with three numbers better than average—"It’s the Natural Thing to Do”, “It’s On, It’s Off” and “The Moon Got in My Eyes”—but a show which lacks buoyance and sparkle, perhaps because of unimaginative direction....Although Bing delivers five songs in his customary agreeable voice and makes a pleasant enough suitor for the fair Mary Carlisle, it is really the explosive Miss Raye, the madcap adagio dance team of Ames and Arno and the Calgary Brothers (specialists in inebriation) who provide the brighter moments."

Variety - "Bing Crosby and Martha Raye are teamed again in Double or Nothing which should give the film big first run sendoffs, as their names are potent on marquees. . . This is not the first time that Crosby has carried a heavy load on his broad shoulders. Point is, can he keep on doing it indefinitely? He is strictly a personality, just passing fair as an actor, but his croon is unique and the wide radio exploitation he has keeps him a valuable asset for theaters. He needs carefully selected vehicles in which his share of the entertainment obligations is limited to his particular talents. . . Value of the Crosby warble is dimmed because he sings in nearly every episode in which he appears. Some of it is so casual that his major effort near the end of the picture falls rather flat."

The Washington Post - "That gorgeous rowdy-dow, Martha Raye, divides honor evenly with Bing Crosby, now undisputed king of the musicals, his mere crooner days forgotten...Bing Crosby was never better and this critic thinks never so good, as in Double or Nothing. This is praise with a vengeance. But when you see Monsieur Crosby dancing with Mary Carlisle and warbling such numbers as “Smarty”, “It’s the Natural Thing to Do”, “All You Want to Do Is Dance” and “After You” — well, we’ll wager a plugged nickel against a double eagle that you’ll agree. Bing is one of the few Hollywoodites who ripens mellowly." 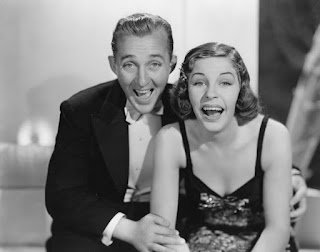 The film boasted a great cast of 1930s stars, and one of the most appealing aspect of Bing Crosby’s 1930s movies were the ones when he starred with Mary Carlisle. They definitely have movie chemistry, and in my opinion, Mary was one of the most beautiful actresses of the 1930s. After seeing Martha Raye in this movie, I dug out an old CD I have of Martha’s records. She recorded for Decca in the late 1930s, and her voice was much better than she was given credit for. She definitely had a way with a song. Harry Barris made an appearance as a bandleader as well. Every time I see Harry Barris in a Bing movie I feel sad because he was so talented, and yet because of his drinking Bing had to help him find work and put him in little roles. Harry Barris was so much more talented than the success that eluded him.

Last time around I reviewed a very different movie with Bing’s 1953 Little Boy Lost. The movie Double Or Nothing could not be more different of a movie, but both movies really showcase Bing Crosby’s greatness. With this movie, it not only showed Bing’s growing command of the film screen, but also it showcased his ability to be a fine comedic actor. Bing was not a superstar like he would become in the 1940s, but with every screen role Bing would become more and more of a screen presence. Double Or Nothing was a fun movie to watch, and they do not make movies like this anymore... 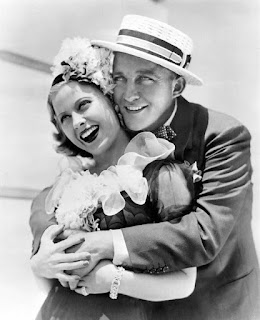 Posted by David Lobosco at 6:15 AM No comments:

BING ON FILM: DOUBLE OR NOTHING - PART ONE 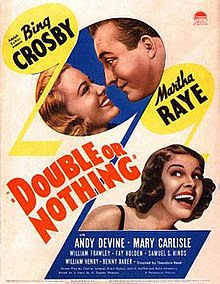 It is amazing how movies can transform you back to a different period in your life. For this review I had the pleasure of watching Bing’s 1937 movie Double Or Nothing. I had not seen the movie in over ten years, but it was one of the first movies I remember watching as a child. Back then I did not have the recordings Bing made for the film, so I had a handheld tape recorder that I held up to the television speaker to record the songs. It is amazing how far we have come in technology since then! When I was younger, I remember watching Double Or Nothing and thought it was a really fun movie. Seeing it now years later, it is just as fun of a movie, and I might have a better appreciation for the talent that was in Double Or Nothing.

The film had its premiere on September 1st, 1937 at the Paramount Theater in New York City. The movie begins with a stranger leaving wallets $100 in them all over the city. In the wallet is an address to return it to. Not everyone returns the wallet, but four honest souls did. They included a performer who hopes to open up a night club (Bing Crosby), a two bit criminal/thief (William Frawley), an ex-dancer who was trying to stay on the right side of the road (Martha Raye), and a clueless buffoon (Andy Devine). Those four people go to the address where they were instructed. It ends up an eccentric millionaire died, and he did not trust his family. What he did trust and believe in was the honesty of strangers. His lawyer tells the four confused people that they will get $5000 to keep. However, the first person who could double that sum within one month, through honest means, would inherit the millionaire’s entire estate. Otherwise, the entire estate would go to the millionaire’s greedy brother who is determined to thwart the plan. 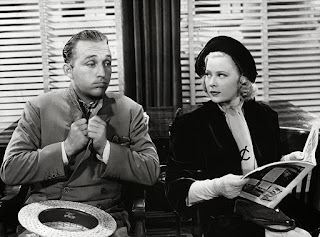 Each of the four try their hand at doubling their money. However they are sabotaged by the millionaire’s family which includes the greedy brother of the millionaire (Samuel Hinds), his wife (Fay Holden) and their beautiful daughter (Mary Carlisle). William Frawley loses his money very quick by listening to the greedy brother. Martha Raye tries her hand at opening a boat tour run by her old dancer friends. Unfortunately, when a particular song is played – “It’s On, It’s Off”, Martha takes her closes off so guess what happens on their opening night! Andy Devine has what seems like a promising business. He opens a little business where one tries to sink a single golf ball and win a big money prize. The sneaky brother brings in a golf pro to sink a putt, but he cannot. At the very last minute though a drunk stumbles into the business and sinks a hole in one, so Andy Devine loses his money. Bing ends up being the only smart one! He wants to open a nightclub, and he rents the building from the millionaire’s brother, but he reads the fine print and sees the nightclub is only zoned for storage, so he buys the building next door to move the nightclub to on the night of opening... 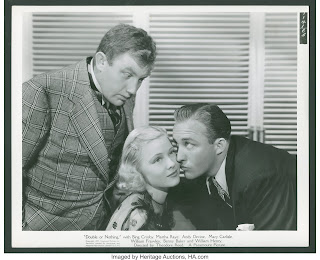 Posted by David Lobosco at 6:09 AM No comments: