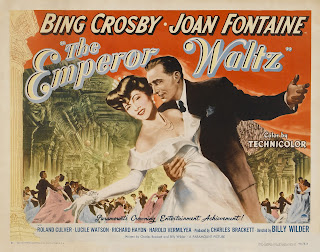 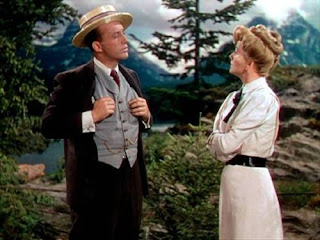 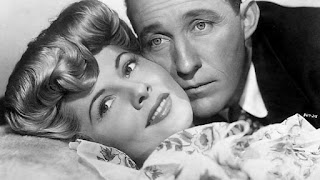 Posted by David Lobosco at 5:48 AM No comments:

A sad day for fans of Bing Crosby. Earlier this year Wayne Martin, the editor and vice-president of Club Crosby until 2003 died... 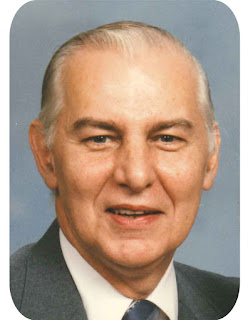 Wayne LeRoy Martin, 87 of Higginsville, Missouri died on Friday, February 23, 2018, at his home. Born Tuesday, March 11, 1930 in Corder, Missouri, he was the son of the late LeRoy Martin and the late Golda Belle Welliver. He married Sandra Hostetter Martin on July 16, 1974. She survives of the home. He was a Veteran of the Korean War serving in the United States Army. He received a masters degree in Library Sciences from the University of Colorado and a masters degree in English from Central Missouri State University.

He was a former editor for the Bing Crosby magazine and the Director of Libraries for Brentwood, Missouri school systems, retiring in 1989. He was a member of United Church of Christ in Kirkwood, Missouri prior to moving to Higginsville in 2011. Surviving are one daughter, Robin Teter and her wife, Sandra Martin. A funeral service will be held at 2:00 PM on Wednesday, February 28, 2018 at the Hoefer Funeral Home with Rev. Dr. Tommy Faris officiating. Interment will be in the City Cemetery. The family will receive friends from 1:00 PM to 2:00 PM on Wednesday, February 28, 2018, at Hoefer Chapel. Memorial contributions may be sent to Beacon of Hope in Oak Grove, MO...
Posted by David Lobosco at 5:52 AM No comments: 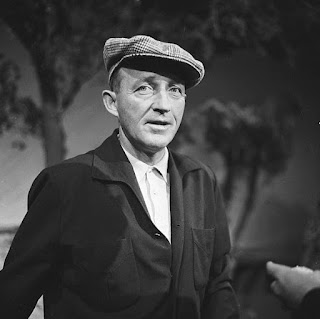 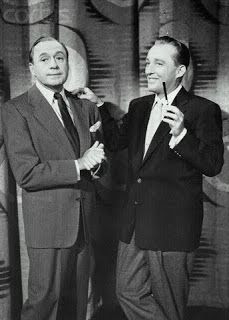 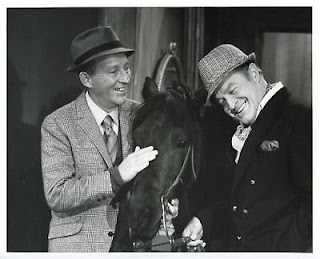 SOURCE
Posted by David Lobosco at 8:07 AM 2 comments:

Music in harmony, clear and sweet and rhythmic, approached intelligently, often humorously and always with a timing that is a thing of beauty in itself, is the essence of an act starring Phillip, Dennis and Lindsay Crosby, three of Bing's sons, which E. M. Loew and Ed Risman presented last night at the Latin Quarter.

Advance notices from Las Vegas, where the boys were enthusiastically received, do not exaggerate. It is no fly-by-night act, built on a father's reputation. Rather, does it subtly recognize talent handed down to another generation that carries on in its own proficient way.

Much credit is due John Bradford and William Friml, who added some apt lyrics for the opening "This is a Lovely Way to Spend an Evening" and the following "You're a Good Group." The numbers are the boys' introduction of themselves to the audience, and they are solid.

The next two numbers "Mamselle" and "Dinah," are purely the harmony, indicating the range of each voice and pinpointing the personalities in little ways. There isn't a solo all night, but each boy takes a brief turn in introducing a segment or singing a few bars.

Charles O'Curran staged and produced this superior act of the Crosy Bros., Bill Thompson did the orchestration and vocal arrangements and drummer Lloyd Morales sat in with Joe Lombardi's orchestra as Fred Otis conducted from the piano.

A folk medley of "Scarlett Ribbons," "Little White Duck," "Old Dan Tucker," "Lil' David" and "Joshua" made up the second segment of the act, with each number interpreted in an original manner.

Then came the finale, as the boys did excerpts from about 30 songs made famous by their father. This could have been an ear-bending, wearying number without proper editing. As they present it, it is a closely woven tapestry of song and sentiment, bringing the past to the present with taste and skill.

As they closed, in tribute to Bing, with "The Blue of the Night," I felt deeply moved and awfully glad I attended the opening.

Earlier, before and during the show, I realized the familiar antics of Frank Libuse, the mad "waiter," as well as other variety acts and the beautiful girls in Fred Wittop's scintillating costumes.

The Crosby Bros. and the Latin Quarter have a rare treat for all comers.

Pictured above are the twins Phillip (top) Dennis (bottom) and Lindsay (the youngest). Eldest brother Gary is not with the group at this time... 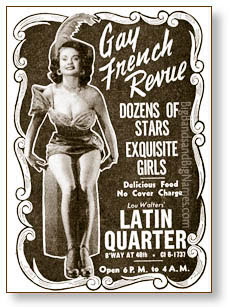