BING ON FILM: RHYTHM ON THE RIVER - PART TWO 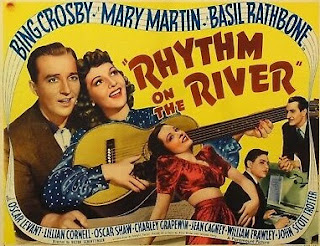 Rhythm on The River is full of great supporting actors who really add to the film. Character actor Charlie Grapewin plays Bing’s uncle. Fresh from his role as Uncle Henry in the Wizard Of Oz for MGM, he was loaned out to Paramount for this film. As I said earlier, character actor William Frawley appeared as a song publisher as well as Charles Lane, another familiar face in hundreds of movies. Former Rhythm Boy Harry Barris had a nice role as the band leader, although the band in the film was Wingy Manone’s band. Wingy Manone was a jazz favorite, but he had lost his had to a streetcar accident when he was young. He has a prosthetic hand and basically plays the trumpet with one hand. It is interesting to watch him in the few scenes he did have to see how he is always hiding his handicap. Also, Bing’s cohorts from his Kraft Music Hall radio show appeared in the film. His bandleader John Scott Trotter played himself, while his announcer Ken Carpenter played another announcer by the name of Teddy Gardner. 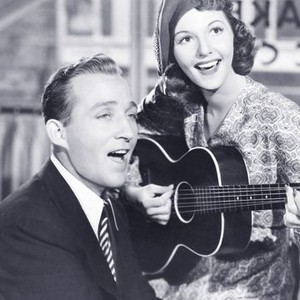 Like the majority of Bing’s lighthearted comedic romps, the music and singing were the main draw. This movie, while it had a compelling plot, was not different. For the film songwriters Johnny Burke and James Monaco wrote the score. The most successful song in the movie was “Only Forever”, the love song, and it would be big hit for Bing Crosby. Another song “That’s For Me” would be a minor hit for Bing. He also recorded the title song – “Rhythm On The River”. His commercial recording pales in comparison to the number he shoots in the movie. In the movie he is at the pawn shop, and he gets his friends’ band instruments out of hawk. Bing sings the song and has so much fun with it – even doing some decent drum work. It is one of the most carefree numbers I think Bing ever shot in the movies. It was and is a high point of the movie for me. Bing also sings two other songs “When The Moon Comes Over Madison Square” (a horrible song in my opinion) and “What Would Shakespeare Have Said” (which he never recorded commercially). Mary Martin got to sing two outstanding solo numbers. Director Victor Schertzinger wrote the torch song “I Don’t Want To Cry Anymore” which Mary sang exceptionally. It was also recorded by Billie Holliday in the 1950s. The other song, which Burke and Monaco wrote for her was the fun “Ain’t It A Shame About Mame”. That was another favorite of mine.

Author Gary Giddins in his second Bing biography “Swinging On A Star-The War Years” seems to enjoy Rhythm On The River, and remarks how the film was a turning point for Bing as an actor in the 1940s. More of Bing’s personality was rolled into his characters. Gary wrote that the movie began as a treatment written in Germany by Billy Wilder (Wilder was an admirer of Bing and directed him in 1948’s The Emperor Waltz). However, Wilder was crushed when Bing brought in his gag writer Barney Dean to punch up the script. In the end, even though Wilder got credit on Rhythm On The River, in later years he denied that he deserved even a writing credit on the film. 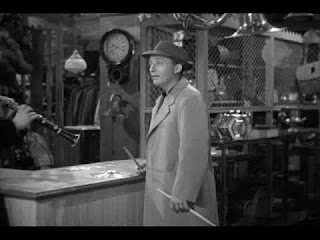 Bosley Crowther of The New York Times enjoyed it: "It’s a very funny thing about this picture business—or this musical picture business, we should say. One producer may come along with a super colossal whopper, all dressed up in fancy pants and boasting a high-class score and folks will find themselves sitting watch on a dull and pretentious fizzle. And then along will come Paramount, say, with an entry such as “Rhythm on the River.” which opened at the Paramount yesterday—an after-you sort of entry which gives the odd impression of having been casually shot “off the cuff”—and, behold, it turns out to be one of the most like-able musical pictures of the season... What’s there to it? Well, there’s Bing, whose frank and guileless indifference, whose apparent dexterity with ad libs is, in this case, beautiful to behold. There is Miss Martin, who is ever so comfortable to look at and who sells a very nice song. There is also Oscar Levant, slumming from “Information, Please,” who makes up in bashless impudence what he lacks in looks, charm, poise and ability to act. There are Mr. Rathbone, Charley Grapewin and Wingy Manone, who plays a hot trumpet, and there are several tuneful numbers, especially “Rhythm on the River” and “Ain’t It a Shame about Mame.” Add them all up and they total a progressively ingratiating picture—one that just slowly creeps up and sort of makes itself at home. It’s a funny business, all right."

I feel the film is pretty much perfect, but there is one scene that bothers me. On Bing’s radio show he is always ribbing his bandleader John Scott Trotter about his weight. In the film, he meets John Scott Trotter in the song publishing office. Although he supposedly just met this famous bandleader, he starts making fun of the bandleader’s weight. If he had just met Trotter, he certainly would not make fun of him. It is a minor scene in the film, but one that has always bothered me. The pairing of Bing with Mary Martin was wonderful. They would appear together in one other film – 1941’s Birth Of The Blues, and they were supposed to make 1942’s Holiday Inn together until Mary got pregnant and had to withdraw from the film. They would go on to appear in numerous radio shows and television specials together. Rhythm On The River is often the forgotten movie in Bing’s filmography, but it is a fun movie to watch. Oscar Levant’s scene stealing moments alone are worth it! Add in a great supporting cast and the genius of Bing Crosby, and you have a wonderful movie...
MY RATING: 9 out of 10 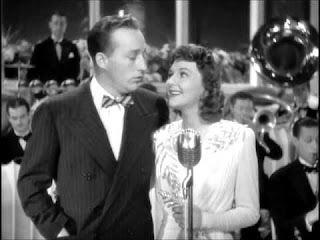 Posted by David Lobosco at 1:03 PM No comments:

BING ON FILM: RHYTHM ON THE RIVER - PART ONE 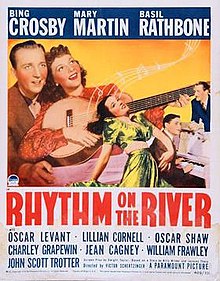 My favorite part of writing a review of Bing’s movies, is when I must pick which movie to watch next. It really is a dilemma as to which movie to choose. It is a good dilemma to have though! This time around I picked a film I had not seen in years – 1940’s Rhythm On The River. I forgot what a good movie it is! Rhythm On The River was the second movie Bing would work on in 1940. He had just completed another good film If I Had My Way, and he went right to work on this film. Filmed between May to July of 1940, the film’s New York premiere would be on August 28, 1940. Originally titled “Ghost Music” – I think the name Rhythm On The River was a much better title for a light hearted Bing Crosby flick.

The movie starts out with a successful Broadway songwriter (played brilliantly by Basil Rathbone) talking with his assistant (also played brilliantly by Oscar Levant) about how he had writer’s block and could not write his own songs anymore. For awhile he had been using ghost writers, because since the love of his life “died” he had been unable to write songs. Oscar Levant in his abrasive way reminds Rathbone that his love did not “die”. She ran out on Rathbone, got married, and just “got fat”. Rathbone uses this as an excuse not to write as well as to make others feel sorry for him. Bing Crosby is the melody ghost writer for Rathbone, who has little ambition to be a songwriter. Bing just wants to run a catfish boat. When Rathbone’s ghost lyricist writer dies, Basil finds a fan letter that an upcoming poet (Mary Martin) has written him, and he gets her to write lyrics for him. He has a deadline in three weeks to write the score for his next musical. Bing had completed the music, but Mary Martin was having trouble writing the lyrics. In her boarding house a band had taken up residence (a band led by Wingy Manone), and all they played was the “Tiger Rag”. So, Basil not thinking, sends Mary Martin up to Bing’s uncle’s inn to relax. Guess who is also there but Bing himself! 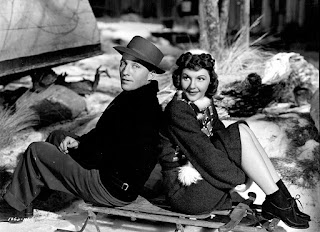 At first Bing and Mary Martin clash. Mary thinks Bing has absolutely no ambition. Well, she is partially right but discovers Bing writes beautiful melodies. Together, in about two minutes they write a song (Only Forever). Bing begins to fall for Mary, but when he starts to sing a song that Mary thought Basil Rathbone wrote, she thinks Bing is a music thief, and she heads back to New York to confront Rathbone. Bing does the same thing, and they are surprised to find each other both in Rathbone’s office and realizes that Rathbone has been playing them both. He gives them a sob story about his love dying, and again Oscar Levant plainly tells them that she “just got fat”. Bing and Mary have fallen in love now, and they decide to go off on their own as a songwriting team. However, the public thinks that they are stealing from Basil Rathbone because the music sounds so much alike. They go to one song publisher after another. Finally, they go to one last one (played briefly by William Frawley), and he does not want their song but he likes Mary’s singing, and he wants her for nightclub work. At first Mary refuses. Broke, Bing gives Basil the song Only Forever, which he wrote with Mary Martin as security for him to write the score. Being the the type of man Rathbone was in the movie, when his Broadway backers want a sample of the score he is writing, he gives them Only Forever, which was not for him to publish. Bing and Mary confront Basil Rathbone, and Basil decides to do the right thing and although he does not admit to the public that they were his ghost writers, he tells everyone that they are his new proteges. Oscar Levant has a great line when Basil is announcing it and says, “He would stand up at his own funeral to get applause”. The film ends with Bing and Mary being announced as song writers as well as professing their love for each other and plans to marry...
TO BE CONTINUED... 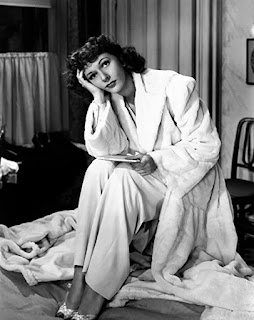 Posted by David Lobosco at 1:02 PM No comments: