Tis the season for Christmas - and Bing! Here is a cute ad featuring Bing, Bob Hope, and Dorothy Lamour as they were promoting 1952's The Road To Bali. They are selling scotch tape - just in time for the holidays! 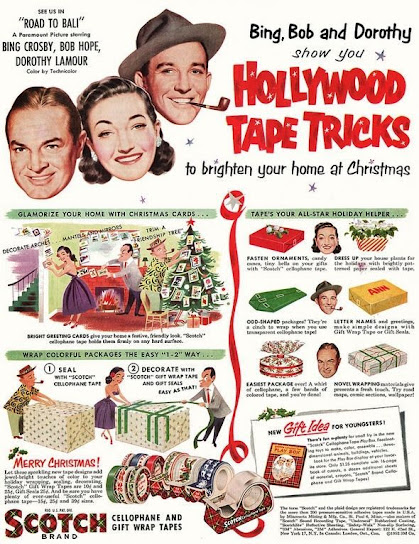 Posted by David Lobosco at 11:58 AM No comments:

Posted by David Lobosco at 11:30 PM No comments:

A companion set to the Philco Radio Time release (SEPIA 1353), the songs on this 2 CD set are from the Chesterfield radio series and largely drawn from hits by other artists. Most are new to CD including duets with Perry Como, Dinah Shore, Fred Astaire, Bob Hope, Patti Page etc... 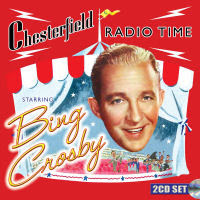 CD1
1. CHESTERFIELD INTRO
2. A COCKEYED OPTIMIST
3. MAYBE IT'S BECAUSE
4. I'VE GOT A LOVELY BUNCH OF COCONUTS
5. MARTA
6. CANDY AND CAKE
7. MUSIC! MUSIC! MUSIC!
8. A DREAM IS A WISH YOUR HEART MAKES with Perry Como
9. DEAR OLD GIRL with Perry Como & Arthur Godfrey
10. I'VE GOT THE WORLD ON A STRING with Mildred Bailey
11. WITH MY EYES WIDE OPEN I'M DREAMING
12. OLD FOLKS AT HOME with Lindsay Crosby
13. IF I KNEW YOU WERE COMIN' I'D'VE BAKED A CAKE with Beatrice Lillie
14. IT ISN'T FAIR
15. THE LAMENT OF HOMER TRACY with Fred Allen
16. NEVERTHELESS
17. A BUSHEL AND A PECK with Dinah Shore
18. THE TENNESSEE WALTZ
19. THE THING with Fred Astaire
20. YOU'RE JUST IN LOVE with Toni Arden
21. THE NIGHT IS YOUNG AND YOU'RE SO BEAUTIFUL
22. WHISPERING HOPE with Dorothy Kirsten
23. CAN ANYONE EXPLAIN?
24. MOCKIN' BIRD HILL with Les Paul & Mary Ford
25. IF
26. WOULD I LOVE YOU?
27. I APOLOGIZE
28. THE ROVING KIND with The Cass County Boys
29. ACROSS THE WIDE MISSOURI with The Cass County Boys
30. WHEN YOU AND I WERE YOUNG, MAGGIE BLUES with Teresa Brewer

PHOTOS OF THE DAY: BING AND CHRISTMAS THROUGH THE YEARS

Bing Crosby was and is definitely Mr. Christmas at this time of the year. No entertainer has sung more Christmas songs or had more Christmas hits than Der Bingle. Here are some great Christmas pictures through the years...

Posted by David Lobosco at 11:39 AM No comments:

One of my favorite series of LPs of all time was Decca's Bing's Hollywood series. The Bing's Hollywood series was a Decca Records 15-album set by Bing Crosby of commercial recordings of songs used in his films from 1934 to 1956.
Numbered in order from Decca DL4250 to DL4264, the LPs included "Easy to Remember", "Pennies from Heaven", "Pocket Full of Dreams", "East Side of Heaven", "The Road Begins", "Only Forever", "Holiday Inn", "Swinging on a Star", "Accentuate the Positive", "Blue Skies", "But Beautiful", "Sunshine Cake", "Cool of the Evening", "Zing a Little Zong" and "Anything Goes."
In the UK, Brunswick Records issued the set with the numbers BING1 to BING 15. In 1988 MCA Universal began reissuing "Bing's Hollywood" on compact disc, but poor sales abruptly halted the series following the release of "Holiday Inn", "Swinging on a Star" and "Blue Skies."
Variety gave the background in its issue of March 14, 1962: “The timing was just right for Decca's massive release of Bing Crosby's Hollywood story. It fits perfectly into the programming pattern being adopted by so many radio stations, which in veering away from Top 40, are going in for marathon spinning of an individual personality. This Crosby release is tailor-made for them, in that it consists of 15 separate L.P's containing 189 songs from over 40 pictures. No singer has come close to that mark and it's a record that's sure to stand for a long, long time. For the average consumer the purchase of the complete series will obviously be hard on the pocket-book but each LP can be obtained separately (the suggested retail price is $3.98) and each one is a gem. Not only did Crosby have a solid song-selling way right from the beginning, but he had top tune-smiths turning out material for him all the way...The series is virtually a recorded history of the film musical genre and a credit to all concerned"
On a personal note, I used to have all the albums, but a decade or so ago all of them were damaged in an apartment flood. I have not gotten all of them back in my collection except four. They are rare and hard to come by, but I highly recommend them all!

Posted by David Lobosco at 11:48 AM No comments: