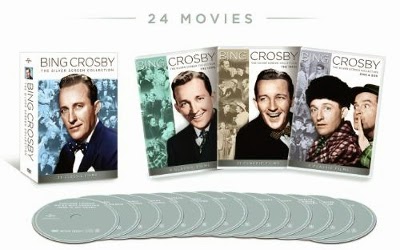 Bing Crosby was a superstar of movies, music, radio and television during a spectacular career that lasted over 50 years, earning over an astounding $1 billion in ticket sales. From his Academy Award-winning performance in 1944's Best Picture winner Going My Way to his series of classic comedic "Road" films with Bob Hope to entertaining musicals enlivened by his distinctive baritone, Crosby is featured in top form crooning some of his most memorable songs such as "June in January," "Swinging on a Star," Sweet Leilani," "I've Got a Pocketful of Dreams" and the evergreen "White Christmas" from Holiday Inn.


This timeless collection will entertain longtime fans and introduce a whole new generation to the legendary style of the most popular singing star of the 20th century in his most unforgettable roles and diverse performances from his early career in the 1930s to his superstar roles in the 1940s. The collection also features iconic screen legends Bob Hope, Fred Astaire, Carole Lombard, Donald O'Connor, Barry Fitzgerald, and many more. Bing Crosby: The Silver Screen Collection includes:


A new feature-length PBS documentary on the life and career of Bing Crosby with new interviews, never-before-seen footage and photos by Emmy-winning director Robert Trachtenberg


SOURCE
Posted by David Lobosco at 6:41 AM 3 comments:

BEHIND THE SCENES OF BING AND BOWIE 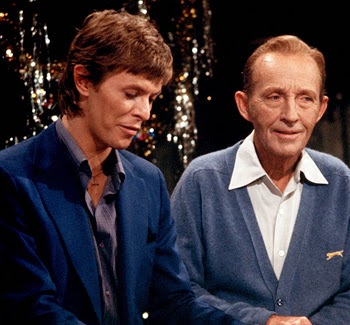 BEVERLY HILLS, California (AP) — David Bowie's duet with Bing Crosby on the entertainer's 1977 Christmas television special left an indelible impression on Crosby's teenage children.
Harry, Mary and Nathaniel Crosby were on set when Bowie arrived to tape his appearance. The mash-up between the cardigan-clad singer known for "White Christmas" and the glam rocker who was in his Ziggy Stardust phase required some last-minute reworking of "The Little Drummer Boy."
The result was a new melody and lyrics called "Peace on Earth." The duet remains a holiday staple and a curiosity. Bowie was 30 and Crosby was 73 at the time. Crosby died of a heart attack a month after the taping in September 1977.
Mary Crosby remembered Bowie arriving on set.
"The doors opened and David walked in with his wife. They were both wearing full-length mink coats, they have matching full makeup and their hair was bright red," she told the summer TV critics' tour Wednesday. "We were thinking, 'Oh my god.'"
Nathaniel Crosby added, "It almost didn't happen. I think the producers told him to take the lipstick off and take the earring out. It was just incredible to see the contrast."
Watching in the wings, the Crosby kids noticed a transformation.
"They sat at the piano and David was a little nervous," Mary Crosby recalled. "Dad realized David was this amazing musician, and David realized Dad was an amazing musician. You could see them both collectively relax and then magic was made."
The Crosby siblings — now all in their 50s — and their 80-year-old mother, Kathryn, made a rare public appearance together Wednesday to discuss the American Masters episode, "Bing Crosby Rediscovered," airing Dec. 2 on PBS... 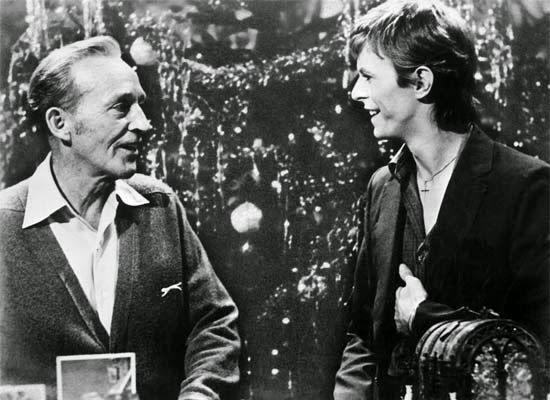 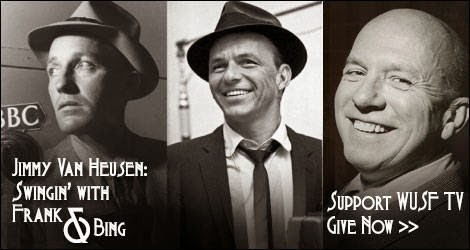 When they talk about the great golden-age songwriters like Cole Porter, Irving Berlin and the Gershwins, they sometimes leave out Jimmy Van Heusen.

Van Heusen, who borrowed his name from an ad for men’s dress shirts, wrote the likes of “Swinging on a Star,” “All the Way,” “High Hopes,” “Love & Marriage,” “Call Me Irresponsible,” “Come Fly With Me” and “Here’s That Rainy Day."

The special also touches on his reputation, apparently well earned, as what used to be called “a ladies’ man.” Specifically, someone cracks that Sinatra wanted to be Van Heusen.

For the record, Van Heusen eventually settled down, married and bought a horse ranch.

Most of the special focuses, though, on the music. As a composer, Van Heusen had a gift for irresistible melodies, plus the good sense, reputation and connections to work with lyricists like Sammy Cahn.

They often turned out songs on demand, which is how movie musicals, or movies with songs, used to work.

A childhood prodigy, Van Heusen switched coasts a couple of times, spending part of the ’50s with the New York nightclub crowd and eventually ending up closer to the film biz in L.A.

“Jimmy Van Heusen” leaves a clear impression, strongly supported by multiple clips of singers performing his songs, that no “great composers” sentence should omit his name. 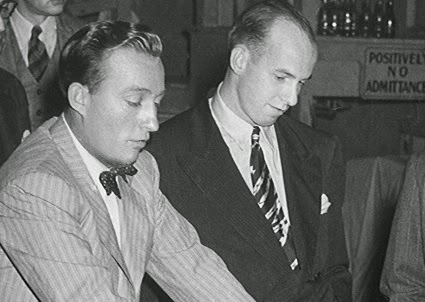 Posted by David Lobosco at 4:00 AM No comments: 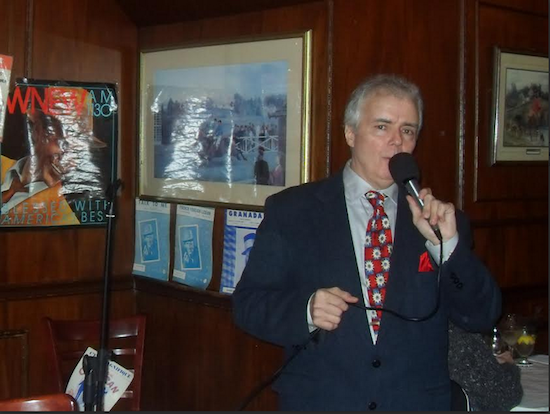 Martin McQuade, a Bay Ridge crooner who has performed songs made famous by the likes of Bing Crosby and Dean Martin, is paying tribute to the King.
McQuade’s new dinner show, to be presented at Hunters Steak and Ale House at 9404 Fourth Ave. on July 17, will honor Elvis Presley.
“I will perform a show honoring the 60th anniversary of Elvis Presley's very first recording session (July 5, 1954) as well as his first live professional appearance (July 30, 1954),” McQuade wrote in an email to the Brooklyn Eagle.
Pianist Pete Sokolow will accompany McQuade as the singer celebrates the milestones of Presley’s early career.
McQuade has dedicated much of his adult  life to the study and singing of American popular music. He has been regularly performing at restaurants in Bay Ridge for more than 10 years.
McQuade is a graduate from New York University, where he earned a BA in Cinema Studies. His radio series, “Going Hollywood,” appeared on WNYE-FM for many years. In 2002, Martin served as guest curator for Hofstra University’s conference, “Bing! And American Culture.”
From 2003 – 2008 he worked for Bing Crosby’s widow, Kathryn Crosby, serving as her special events coordinator. McQuade assisted her with the organization of several tributes and retrospectives honoring her late husband. Among the tributes was a 2004 New York Public Library series, “Celebrating the Crosbys.” McQuade also arranged several visits that Kathryn Crosby made to Brooklyn, including two visits she paid to the U.S. Army Garrison at Fort Hamilton in 2005 and 2006.
McQuade is currently a consultant for Bing Crosby Enterprises. He has written liner notes on albums and served as production assistant for the company's recent CD and DVD releases. He is also a correspondent for Bing Magazine, published by the International Club Crosby.
Martin is writing the liner notes for a forthcoming deluxe Crosby jazz collection due to be released this fall.
Martin has also just completed a promotional campaign for a major Dean Martin exhibition held in New York in June...
SOURCE
Posted by David Lobosco at 4:30 AM No comments: 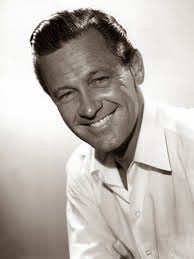 William Holden was one of the biggest box office draws of the 1950s. A combination of good looks and acting ability made him a sought after actor. His association with Bing came in a few ways. He starred with Bing in the tense drama The Country Girl in 1954. Like Bing, Holden dated his co-star from the movie Grace Kelly. Then after Bing died in 1977, Bill Holden narrated a documentary on Bing a year later. Like Crosby, Holden was one of the leader movie actors. However, personal demons derailed his career in the 1960s and caused him to have a tragic end in 1981.
Holden, eldest of three sons (brothers were Robert and Richard), was born William Franklin Beedle, Jr. in O'Fallon, Illinois on April 17, 1918, the son of Congregationalist parents Mary Blanche (née Ball), a schoolteacher, and William Franklin Beedle, Sr., an industrial chemist. Holden's first starring role was in Golden Boy (1939), in which he played a violinist turned boxer. That was followed by the role of George Gibbs in the film adaptation of Our Town.
After Columbia Pictures picked up half of his contract, he alternated between starring in several minor pictures for Paramount and Columbia before serving as a 2nd lieutenant in the United States Army Air Forces during World War II, where he acted in training films. Beginning in 1950, his career took off when Billy Wilder tapped him to star as the down-at-the-heels screenwriter Joe Gillis who is taken in by faded silent-screen star Norma Desmond (Gloria Swanson) in Sunset Boulevard, for which Holden earned his first Best Actor Oscar nomination.
Following this breakthrough film, he played a series of roles that combined good looks with cynical detachment, including a prisoner-of-war entrepreneur in Stalag 17 (1953), for which he won the Academy Award for Best Actor, a pressured young engineer/family man in Executive Suite (1954), an acerbic stage director in The Country Girl (1954), a conflicted jet pilot in the Korean War film The Bridges at Toko-Ri (1954), a wandering braggart in Picnic (1955), a dashing war correspondent in Love Is a Many-Splendored Thing (1955), an ill-fated prisoner in The Bridge on the River Kwai (1957) and a WWII tug boat captain in The Key (1958). 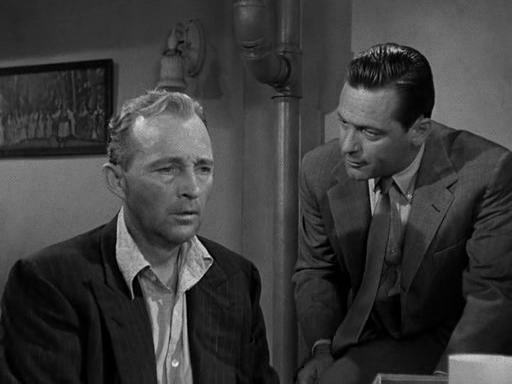 He also played a number of sunnier roles in light comedy, such as the handsome architect pursuing virginal Maggie McNamara in the controversial Production Code-breaking The Moon is Blue (1953), as Judy Holliday's tutor in Born Yesterday (1950), as a playwright captivated by Ginger Rogers' character in Forever Female (1953) and as Humphrey Bogart's younger brother, a playboy, in Sabrina (1954), which also starred Audrey Hepburn.
Holden starred in his share of forgettable movies — which he was forced to do by studio contracts — such as Paris When It Sizzles (1964), also co-starring Audrey Hepburn. By the mid-1960s, his roles were having less critical and commercial impact. According to the Los Angeles County Coroner's autopsy report, on November 12, 1981, Holden was alone and intoxicated in his apartment in Santa Monica, California, when he slipped on a throw rug, severely lacerated his forehead on a teak bedside table, and bled to death. Evidence suggests he was conscious for at least a half hour after the fall but may not have realized the severity of the injury and did not summon aid, or was unable to call for help. His body was found four days later.
Holden dictated in his will that the Neptune Society cremate him and scatter his ashes in the Pacific Ocean. No funeral or memorial service was held, per his wishes... 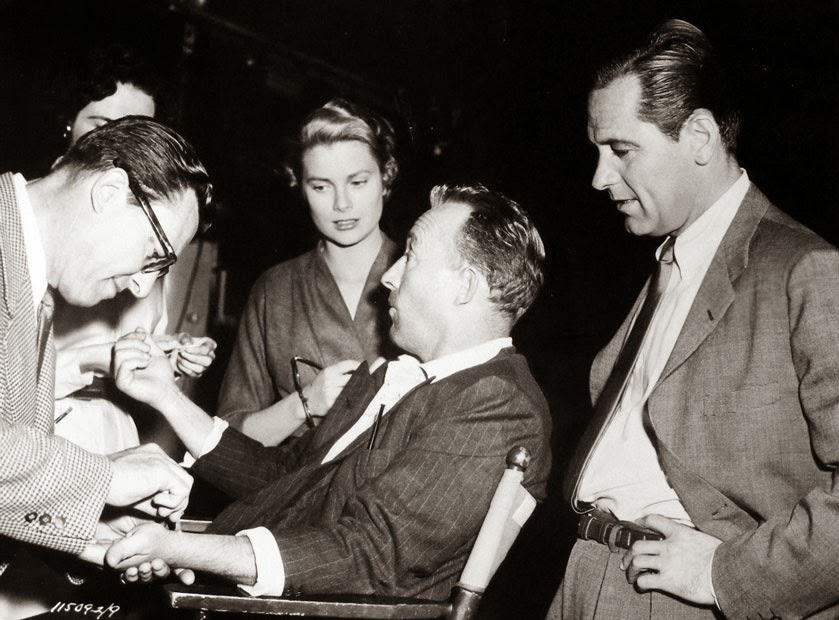 Posted by David Lobosco at 3:16 AM No comments: