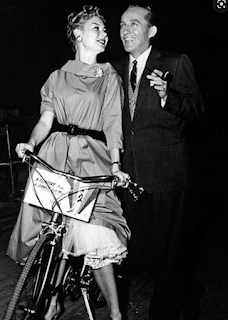 The movie music industry was changing in 1956. Anyways, Bing new I was an avid bike rider, so on my first day on the set he gifted me a beautiful English bike to get around the lot on. He included a name plate for the bike which was a joke about me working at the 20th Century Fox salt mines. Bing had a great sense of humor, and the time I had filming Anything Goes ranks up there as some of my fondest memories. This is mostly due to Bing Crosby!" - Mitzi Gaynor 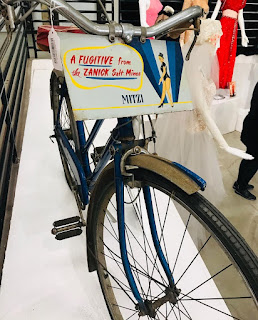 Posted by David Lobosco at 9:37 AM No comments:

On this day, January 18th, some 81 years ago - Bing was in the Decca studio with the great Woody Herman & His Orchestra... 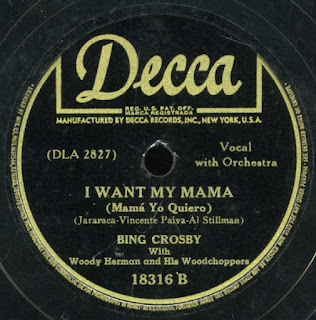 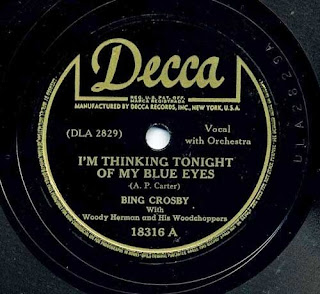 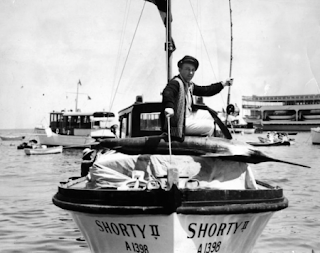 
My dad passed away when I was 13 years old, and one of the many lingering voids that encircled me included the loss of my fishing mentor. I was really just learning the outdoor ropes and was left to find my own way. I was involved in Scouts and that helped, and a couple of my friends' dads tried to make an effort to include me in activities, but most of them were more adept at tossing a baseball than a Jitterbug or Hula-Popper. It wasn’t the same.

Baseball and football were certainly fun, and most of the girls I knew were beginning to draw some interest, but these weren’t enough — part of me was missing. Then I met Bing Crosby.

It was a Sunday afternoon and we had just gotten home from church. I flipped on the TV and was waiting for it to warm up, hand poised over the dial ready to flip through the four or five channels that came in clear enough to be viewed. An announcer began booming before the picture cleared: “Welcome to the American Sportsman. Today, we will be fly fishing for Atlantic salmon with Bing Crosby.” I plopped onto the floor with one of the sofa pillows.

I don’t really remember all the details of that broadcast, but I do recall being mesmerized by the scenery and the seemingly endless, graceful motion of the rod. I’d never heard of fly fishing before, and what Bing was doing seemed like magic.


Bing Crosby looked like he had just left church himself, complete with a tie and dapper felt fedora. He sported some kind of chest-high boots and was waiving a rod that must have been 10 feet long. The line was thick and traveled in long, looping arcs that he repeated until he allowed it to float gently to the water. After following its drift down the current, he would gracefully pull back, tugging the line with a swift gentleness back into its aerial ballet. Back and forth, back and forth — until once again, allowing it to settle on the water’s surface.

His jaw was clenched down on a briar pipe, just as I’d seen my father do a thousand times — an invisible drift of a cherry blend tobacco wafted through a lost memory. Bing wasn’t performing for the camera. This wasn’t some old movie — he was having the time of his life. He was truly happy.

Suddenly, he lifted the rod high and with a sudden jerk, which I knew meant that a fish had been fooled into striking his lure. After an aquatic tug-of-war, he landed one of the Atlantic salmon the announcer had promised. Pulling the briar from his lips, he broke into a smiling chorus of what sounded like an Irish brogue that only Bing could pull off. This was no act; this was pure enjoyment of an experience.

I didn’t understand the rod, the reel, what fly fishing was, or its techniques. I really had no idea what Bing was doing. I only knew that I wanted to try this kind of fishing. I wanted to be that happy again.

It was February, but I still picked up a glass 7-weight rod and a Daiwa automatic reel at a local sporting goods dealer — even though I had no idea what I was buying or how to use them. I stopped at the local library and checked out every book on the shelf concerning fly fishing, as if I was readying to write my next term paper. My first casts with that rod were made across our snow-swept yard. I’m certain that the neighbors thought I’d finally fallen off Grandma’s rocker and hit my head.

Bing and I never met, and he never knew what he had done for one lost kid. He gave me back a piece of something I thought was lost forever. He taught me that smiles sometimes take effort, but that they’re still inside just waiting for the opportunity to burst. He taught me that joy can be remembered and recaptured, and dreams can be netted from sunken hides. He showed me that joy can be found while standing alone on an uncrowded stream.

Today, so many of the shows about hunting and fishing concentrate too much upon the catch, the kill or the trophy. It has to be the biggest, the most, or at least the coolest video. They turn something natural into a competition. That just isn’t how most sportsmen operate — at least, I hope not.

I wish that Bing’s kind of show still played on a Sunday afternoon — I know that there are a lot of kids that need it. You don’t need to be the best or own the best — you just need to get out and search for what makes you happy. Amazingly, it can be something as simple as a quiet trip along a stream... 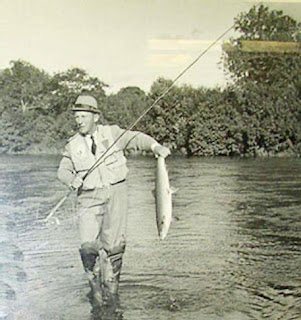 SOURCE
Posted by David Lobosco at 9:06 AM No comments: 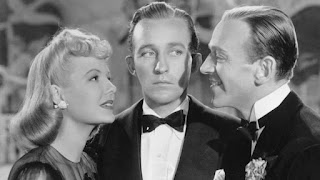 This is a well written comparison of Holiday Inn and White Christmas. I recommend not only reading this article but visiting this great blog from a fellow movie lover...
It’s hard to shoot down the movie that brought us the song, “White Christmas,” (talking about Holiday Inn), but it’s not thought of as a classic in the way White Christmas is. Both star Bing Crosby, both take place more or less around a hotel/inn, and both are full of music and a little dancing. If it wasn’t for Holiday Inn, there wouldn’t be a White Christmas movie, but White Christmas goes farther and leaves us with that warm, fuzzy feeling.

Holiday Inn revolves around Jim Hardy (Bing Crosby) wanting to leave show business for the “good life” where he doesn’t have to work much. He opens an inn which is only open on holidays and gets a pretty girl to perform there for him. When Ted Hanover (Fred Astaire) shows up, he wants the girl as his new dance partner, which would take her away from the inn and Jim, who loves her. It’s a bit stale, and has song and focuses too long on dance routines for holidays such as Abe Lincoln’s Birthday, Washington’s Birthday, Valentine’s Day, Independence Day. Though we think of it as a Christmas movie, there’s not a lot of Christmas in it. 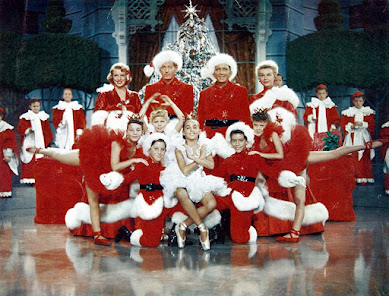 White Christmas, on the other hand, takes place in the days leading up to Christmas. After WWII, song and dance act Wallace and Davis (Crosby and Danny Kaye) meet up with a sister act (Rosemary Clooney and Vera-Ellen) who are on their way to Connecticut. When they arrive there, they find their old army sergeant struggling to make ends meet at an old ski lodge when it’s too warm for snow, so they decide to help out by moving the act out there. In the meantime, there’s music and dancing and a little romance. And then it starts to snow.

White Christmas gives us that feeling that only comes once a year whereas Holiday Inn seems more like a farce – trying to pack in as much singing and dancing without a whole lot of plot. Without the one, we wouldn’t have the other, but we don’t need both. Sorry, Holiday Inn, but I’m dreaming of a White Christmas...

SOURCE
Posted by David Lobosco at 9:11 AM No comments:

Posted by David Lobosco at 8:13 AM No comments:

In December of 1976, Bing made his Broadway debut at the Uris Theatre on West 51st Street. I was only 2 years old that year, so unfortunately I never had the honor to see being in person... 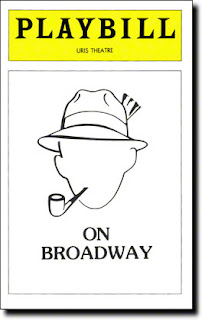 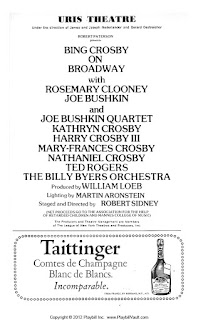 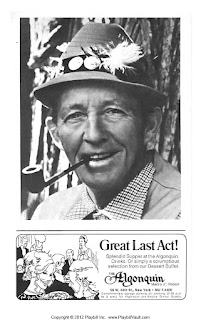 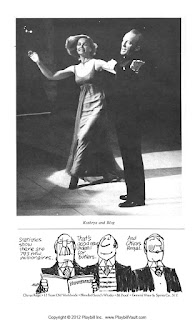 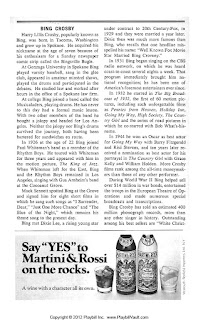 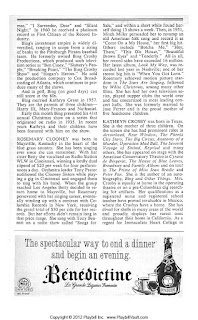 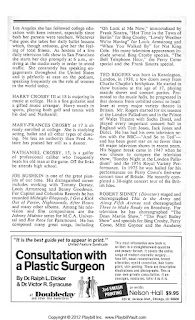 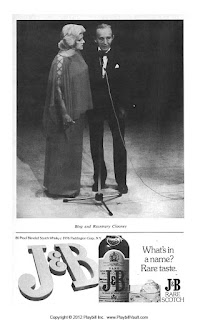 Posted by David Lobosco at 7:52 AM No comments: