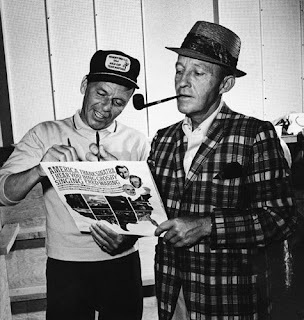 In 1962 President Kennedy planned a weekend trip to Palm Springs, California, where he would stay at the residence of Frank Sinatra from March 24-26. As the weekend approached, Bobby Kennedy, the President's brother and attorney general, became concerned about Sinatra's extensive links to organized crime. He persuaded the President to cancel his stay with Sinatra, and Peter Lawford was given the assignment of informing Sinatra. Lawford  was both a member of Sinatra's Rat Pack and a Kennedy relative by marriage. When Bobby asked Lawford to inform Sinatra of the President's change in plans, Peter pleaded with Bobby to reconsider. The attorney general was adamant, however, that the President could not stay at the house of a man who also played host to hoodlums.

Lawford told Sinatra biographer Kitty Kelley: "It fell to me to break the news to Frank, and I was frankly scared. When I rang the President I said that Frank expected him to stay at the Sinatra compound, and anything less than his presence there was going to be tough to explain. It had been kind of a running joke with all of us in the family that Frank was building up his Palm Springs house for just such a trip by the President, adding cottages for Jack and the Secret Service, putting in 25 extra phone lines, installing enough cable to accommodate teletype facilities, plus a switchboard and building a heliport. He even erected a flagpole for the Presidential flag after he saw the one flying over the Kennedy compound in Hyannisport. No one asked Frank to do any of this, but he really expected his place to be the President's Western White House."

"When Jack called me, he said that as President he just couldn't stay at Frank's and sleep in the same bed that [Sam] Giancana or any other hood had slept in. 'You can handle it, Petah,' he said to me."

Lawford continued, "I made a few calls but in the end it was Chris Dumphy, a big Republican from Florida, who arranged everything at Bing Crosby's house for him. The Secret Service stayed next door at Jimmy Van Heusen's, and Frank didn't speak to him for weeks over that one, but I was the one who really took the brunt of it. He felt that I was responsible for setting Jack up to stay at Bing's -- Bing Crosby, of all people -- the other singer and a Republican to boot. Well, Frank never forgave me. He cut me off like that -- just like that." 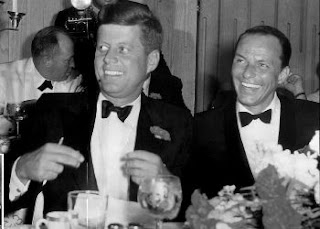 Frank could not believe what Lawford told him: that the President was coming to Palm Springs but would stay at Bing Crosby's Rancho Mirage residence near Palm Springs because Bobby didn't want him to stay with Frank. Frank called the attorney general in Washington. Bob explained it was impossible for the President to stay at his house because of the disreputable people who had been his houseguests.

"Frank was livid," said Peter. "He called Bobby every name in the book, and then rang me up and reamed me out again. He was quite unreasonable, irrational, really. George Jacobs told me later that when he got off the phone, he went outside with a sledgehammer and started chopping up the concrete landing pad of his heliport. He was in a frenzy."

When the President arrived at the Crosby home, he called Sinatra to smooth things out and to invite him for a visit to Bing's place. Sinatra declined, saying he had to leave for Los Angeles. After the conversation, the President told Lawford, "He's pretty upset, but I told him not to blame you because you didn't have anything to do with it. It was simply a matter of security. The Secret Service thought Crosby's place afforded better security."

Lawford told Kelley: "That's the excuse we used -- security -- and we blamed it all on the Secret Service. We'd worked it out beforehand, but Frank didn't buy that for a minute, and, with a couple of exceptions, he never spoke to me again. He cut me out of all the movies we were set to make together -- Robin and the 7 Hoods, 4 for Texas -- and turned Dean [Martin] and Sammy [Davis] and Joey [Bishop] against me as well." 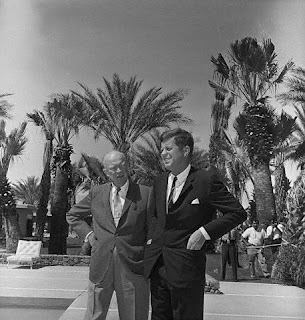 Not only did Sinatra cut Lawford from his upcoming Rat Pack movies, he rubbed salt in his wounds by persuading Bing Crosby to play the role of Alan A. Dale intended for Lawford in Robin and the 7 Hoods!

The President used his stay at Bing's home to party with Hollywood celebrities. Bing was not present. Mimi Alford, a White House "intern" and presidential playmate, recalled the events in her 2012 book:
"The next day, we headed out to Bing Crosby's house in Palm Springs, where a large festive crowd -- many from the entertainment industry -- had gathered to greet President Kennedy. I felt like I'd been admitted into some wonderful, secret club.

But then the evening turned into a nightmare.

Crosby's house was a modern, sprawling single-story ranch in the desert, and the party was raucous. Compared to what I'd seen in Washington, this was another planet. There was a large group of people, a fast Hollywood crowd, hovering around the President, who was, as always, the center of attention. I was sitting next to him in the living room when a handful of yellow capsules -- most likely amyl nitrite, commonly known then as poppers -- was offered up by one of the guests. The President asked me if I wanted to try the drug, which stimulated the heart but also purportedly enhanced sex. I said no, but he just went ahead and popped the capsule and held it under my nose. (The President, with all his ailments, was accustomed to taking many medications and was reported to rely on amphetamines for energy. But he didn't use the drug himself that evening: I was the guinea pig.) Within minutes of inhaling the powder, my heart started racing and my hands began to tremble. This was a new sensation, and it frightened me. I panicked and ran crying from the room, praying that it would end soon, that I wasn't about to have a heart attack. Dave Powers, bless him, ran after me and escorted me to a quiet corner in the back of the house, where he sat with me for more than an hour until the effects of the drug wore off.

I didn't spend that night with President Kennedy. He was staying in a suite, now known as the Kennedy Wing, with its own private entrance on one side of the Crosby property. Was he alone? I do not know. For the first and only time since I met him, I was relieved not to see him -- and fell asleep in one of the guest rooms." (Alford, pages 80-81)JFK did not use Alford to satisfy his sexual needs at the Crosby mansion because he had a bigger conquest in mind -- Marilyn Monroe, who was an overnight guest. According to Monroe's biographer Donald Spoto, Monroe called her personal masseur, the actor Ralph Roberts, from the same bedroom where JFK was staying at Crosby's house. Roberts, JFK and Monroe then had a brief conversation about the President's back problems. Spoto later interviewed the masseur, who said Monroe told him that weekend at the Crosby home was her only sexual contact with the president. (Spoto, pages 487-505)

President Kennedy stayed one more time, Sept. 28-29, 1963, at Bing's Palm Springs home, after which he phoned Bing to thank him for the use of his home. Less than 2 months later the President was murdered in Dallas, Texas... 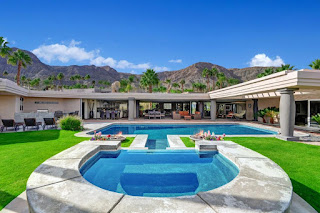 SOURCE
Posted by David Lobosco at 6:49 AM No comments:

My daughter is six, and I have her fascinated with Bing Crosby. Afterall, she is named after the Bing song "I Love You. Samantha" from 1956's High Society. For some reason though she loves to look at pictures of Bing without his toupee. I originally did a photo story on Bing's baldness in 2011, which is one of the most popular photo blog entries I've done. So I combed my photos and found some more pics of a bald Bing Crosby... 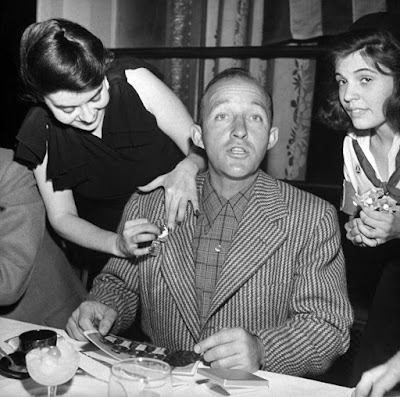 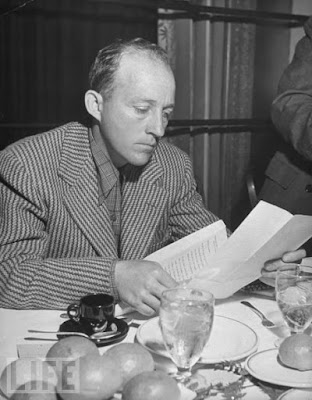 You can see the original post here: PHOTOS OF THE DAY: A BALD BING
Posted by David Lobosco at 5:59 AM No comments: