BING AND ROSEMARY CLOONEY: A FRIENDSHIP 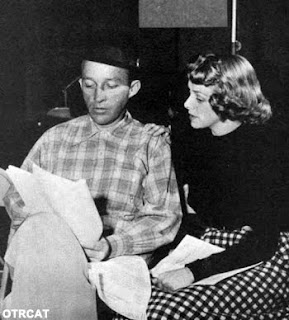 The Bing Crosby-Rosemary Clooney Show is a treat for audiences, but was also a good deal of fun for its stars. In 1960 radio made a bid to attract some daytime listeners, and proposed the project to Bing. Rosemary Clooney had found success in the high-pressure world of the early 1950s recording industry, and became a household name with the 1954 release of White Christmas in which she starred with Crosby. By this time Bing was successful enough that he didn’t need the work, and would only do the show if it could be prerecorded on magnetic tape (Crosby was an investor in Ampex, the first successful American tape recorder.)

The shows were rather simple; they featured music, was usually from earlier recordings that Clooney and Crosby had made, although they did record some duets for the show. Because the recording equipment was somewhat portable, the spoken parts of the show could be recorded whenever and where ever is was convenient for the stars to get together. Often this would be at Clooney’s home, the Hollywood mansion that had formerly belonged to composer George Gershwin. This would have been very convenient for Clooney, mother of seven whose marriage to Jose Ferrer was on the rocks (they would divorce in 1961, reconcile in 1964, and divorce again in 1967.) It also allowed Bing plenty of time for the golf course.

Things didn’t remain fine for Rosemary. She had long suffered from bipolar disorder, and fought depression for many years. Soon after her second divorce from Ferrer, she found solace by campaigning for her friend Bobby Kennedy’s bid for the Presidency. She was with him when he was assassinated in 1968. This led to a nervous breakdown on stage a month later. She would recover from the breakdown, but her career was in a shambles. She was reduced to singing in Holiday Inn lounges to make ends meet, all the while fighting her addiction prescription medications. 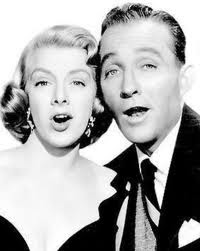 In 1976 Bing was planning a tour to celebrate his 50th year in Show Business. This would be his last tour, and he asked his good friend Rosemary Clooney to join him. It would be the beginning of Clooney’s comeback.

After their tour of England, Bing flew to Spain to go hunting and play golf. After 18 holes near Madrid on Oct 14, 1977, Bing collapsed and died of a massive heart attack.

Rosemary always felt that her mission in life was to sing well. She told interviewers that she hoped that she would know when her talent began to fade, so she could leave the stage.

Rosemary’s last performance was singing “God Bless America” with the Honolulu Symphony Pops in late 2001. She died of lung cancer at her home in Beverly Hills on June 29, 2002... SOURCE
Posted by David Lobosco at 4:11 AM