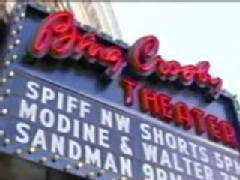 SPOKANE, Wash. -- If you've ever wanted to own part of Spokane's history, now's your chance as the Bing is on the market.

"Built in 1915 with 756 seats in the Bing Crosby Theater, one of the sales pitches is there's not a bad seat in the house," owner Mitch Silver said.

Walking down through the Bing Crosby Theater and onto the stage one gets a sense of the history of the place. This is the stage where everyone from Big Crosby himself to Pearl Jam has performed.

If you've ever wanted to own part of Spokane's history, now's your chance as the Bing is on the market. KXLY4's Ian Cull reports.

"The economy in the last three years, if I was rolling in the dough and had money coming in hand-over-fist, I'd have no problem hanging onto this," he explained.

There are, however, a few upgrades that need to be made. Cracks in the sidewalk are causing water to seep into dressing rooms, which will cost $9,000 to fix. The roof also leaks at times and needs to be replaced, which will cost the buyer another $60,000.

Still, Silver says it's a steal compared to the other theaters in town for a piece of local theatrical history.

"Extremely affordable for what this building is," Silver said...