BING AND HIS DENIM TUXEDO 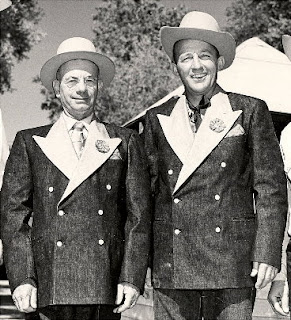 In 1951 famous actor/singer Bing Crosby tried to check in at a Vancouver, British Columbia hotel. He was in hunting clothes and sported an unkempt appearance - Crosby was on the tail end of a hunting trip. The clerk pursed his lips, lifted his nose into the air and slowly scanned down the man and decided one of the most well known entertainers in the world was a common bum. He would not allow Bing to register as a guest.

Bing told the clerk, "I'm sorry I didn't bring my blue serge suit. I haven't worn it since high school and it probably wouldn't fit anyway."

Bob Hope, a close friend who made several popular movies with Crosby, later gave the hotel clerk a small part in one of his movies because "he knew how to recognize a bum."

Back in Elko, Silver State Stampede members saw a way to get some great publicity for the big rodeo and for Elko. After all, Crosby had been Honorary Mayor of Elko since 1948. Besides, he was a local rancher up at North Fork when he wasn't busy back in Hollywood.

Levi Straus Company in San Francisco was asked by the Stampede committee to make two Levi tuxedos - one for Crosby, the other for Elko Mayor Dave Dotta. Plans called for Elko to celebrate "Blue Serge Day" on June 30, 1951 during the Silver State Stampede. 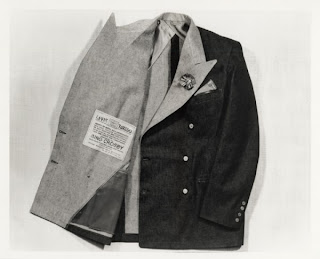 They were beauties. The double breasted tuxedos were, of course, traditional dark blue denim. Lapels were light blue and each jacket had a red boutonniere made of Levi's red tags. Inside the coats were leather labels signed by the president of the American Hotel Association, D.J. O'Brien, that insured the mayor and Bing of lodging registration anywhere in nation.

Crosby shrugged into his tuxedo, buttoned it, and declared, " Hell's fire, ain't that a wizard!"

Both garments are on exhibit at the Northeastern Nevada Museum in Elko...