BING AND SONGS I WISH I HAD SUNG 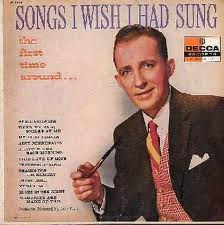 It is unfortunate that Bing did not make more concept albums. The few that he made in the late 1950s were out of this world. One of those such albums is one he made for Decca in 1956 called "Songs I Wish I had Sung". Recently online, a great discussion was sparked regarding this underrated album:


REVIEW BY STEVE FAY (SEE HIS BING SITE HERE.)
I have been listening to the LP of this album again, and to some extent re-evaluating it. When I first started to think about collecting most or all of Bing's albums, this was one of the first ones I added to my collection. Unfortunately, the copy I found was rather worn -- to a degree that the performances sounded less lustrous than I hear now on a much better copy I obtained a few months ago.

One of the things I liked from the beginning about this album are the notes on the back cover, which are attributed to Bing. Bing's recollections of recordings by Gene Austin, Russ Columbo (who he knew at the Coconut Grove), Louis Armstrong's performances of Fats Waller's "Ain't Misbehavin'," and other performers and songs are very fascinating to read.

As to the recordings of the individual songs, I find I like them better and better the more times I listen. For some reason I tried to decide on my favorite one (I'm usually not one for ranking songs), and found the process rather difficult. I finally settled on Johnny Mercer's "Blues in the Night," but "When My Baby Smiles At Me" was a virtual tie, and several others were strong contenders.

On my better copy of the record, I find the Jack Pleis orchestra quite swinging on the swinging numbers, and not too schmaltzy on the love ballads. Also, Jud Conlin's Rhythmaires are employed very selectively, and are used to very good effect. Considering this as one of Bing's earliest albums conceived for the LP format, I think it is very successful, holding together well and being very listenable.

It's not as groundbreaking as "Bing Swings While Bregman Swings," which followed it, but I have heard of a Crosby fan or two who find the Bregman arrangements a bit blaring in the brass and percussion. While I am a big fan of the Bregman album, I suspect that criticism would not be applied by many to the arrangements on "Songs I Wish I Had Sung...." Also I would suspect that fans who are less enthusiastic over Bing's 1950s albums backed by Buddy Cole and trio, finding that sort of backup to thin for Bing, might prefer the orchestrations on this album.

I understand that a CD of it was released in Japan at some point, but I don't know there has been another CD release. 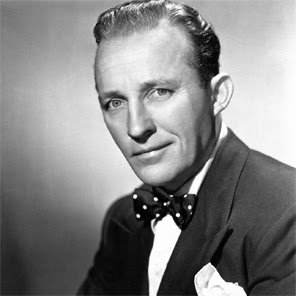 MORE THOUGHTS BY RICHARD BAKER (SEE HIS BING SITE HERE.)
The title implies that Bing had not recorded the songs before but Bing had a little bout of amnesia. In fact several had been performed on radio on many occasions. For example 'Blues In The Night' had been recorded for commercial release and (slightly stretching the point) so had 'My Blue Heaven' though that was admittedly as part of a vocal chorus with Whiteman.

A brief run down -

1 - April Showers had been in a Philco programme in 1947 with Al Jolson.
It was subsequently sung by Bing on a couple of TV shows and in the last recording session in 1977 - a considerably superior version - recently reissued on 'Seasons'

2 - When My Baby Smiles At Me first cropped up in parody form on KMH in 1938 and repeated a couple of times in 1938 and 1939. Oddly, it was recorded with Buddy Cole for radio in the same month as the recording with Jack Pleis. The Cole version was subsequently included as one of the Pete Moore stereo overdubs

3 - My Blue Heaven was one of the very early recordings with Paul Whiteman in 1927. It was included (in presumably a similar form) in an 'Old Gold' broadcast in 1929. Bing got round to a solo performance with Jimmy Dorsey on KMH in 1936 and it appeared in an AFRS broadcast with, of all people, Harpo Marx, playing, of course, his harp. It reappeared on radio in 1948, 1950, (twice) and was again included with the Buddy Cole radio recordings in 1955, in which form it was repeated on radio on many occasions. It also cropped up on TV.

4 - A Little Kiss Each Morning is known to have been included in an Old Gold broadcast with Whiteman in 1930 but I don't think it was otherwise performed by Bing.

6 - Ain't Misbehavin' popped up on radio in1931 (twice) and was again one of those recorded with Buddy Cole in 1954, being repeated in the radio shows on many occasions, and was also overdubbed by the Pete Moore Orchestra..

8 - This Love Of Mine was another with almost no exposure - a fragment only on radio in 1943.

9 - Thanks For the Memory - 1938 (twice) 1944 fragmentary a cappela, 1948 (with Robert Taylor playing cello -quite funny) and subsequently several TV appearances.

10 - Blues in the Night was perhaps the most frequently performed. It was also one of the songs parodied by Bing on an 'African Safari' medley. Bing had previously recorded it for commercial release in 1942 and it was included in radio shows with some frequency in 1941, 42 and 43 on KMH and Victory Caravan shows. It was then put to sleep until the Jack Pleis recording.

12 - Memories Are Made of This - so far as I know the Jack Pleis recording is the sole example.

I know nothing about the Jack Pleis Orchestra but I suspect that like many others appearing on record it was drawn from jobbing musicians for the task in hand. Searches on the internet for such an orchestra and for Jack Pleis as a conductor or arranger throw up almost nothing apart from other recordings in which he was involved.

Personally I am not very keen on April Showers - it is overshadowed by the verve of the Jolson original and I suspect that the arranger was striving too hard to differentiate it from that version. I find the vocal backing here a little annoying - 'drip, drip'. Apart from that single negative comment all the tracks are quite entertaining with the qualification that it is sometimes difficult to 'forget' the well known originals - particulary so with 'Mona Lisa'. Of them all I particularly like 'Memories are Made Of This' - both for Bing's treatment (he almost seems to caress the words) and the orchestral arrangement.

Posted by David Lobosco at 4:16 AM

Labels: music review, Songs I Wish I Had Sung