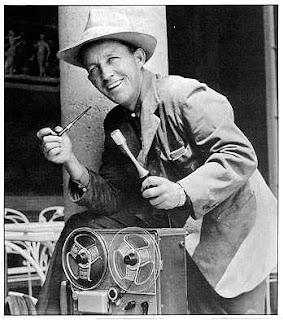 Just a few months away, 2013 will mark the 110th anniversary of Bing Crosby's birth. His career as a singer, entertainer, and actor spanned six decades. During those years, he had become a cultural institution for several generations of Americans. His velvet-like voice and relaxed manner transformed popular singing. He was one of the first performers to exploit the microphone in performance. During World War II, Bing Crosby threw himself into lifting the morale of U.S. soldiers and the troops loved him. His success as an entertainer is underscored by his numerous singing and acting accolades: he was the top box office draw for over a decade, he sang on many platinum and gold records, a number of his songs that appeared in films that won Academy awards, and he even won an Oscar for Best Actor. In 1962, Crosby won the first Grammy Lifetime Achievement Award.

Crosby was also an astute businessman. Not only was he an investor in the business of radio and television; at one point, in 1948, he became a large investor in the Vacuum Foods Corp., which pioneered the first orange juice frozen concentrate. The company later changed its name to Minute Maid. Not content to be just an investor, Crosby obtained sole distribution rights for the West Coast.
He had part ownership in the Pittsburgh Pirates baseball team and owned extensive real estate holdings, including oil drilling operations. Though he is well known as an entertainer, and to a lesser degree as a businessman, very few people think of Bing Crosby as a champion of innovation in radio and television broadcast technology.

His first foray with technical innovation stemmed from his growing dislike for doing live radio shows. In 1936, Crosby became the host of the Kraft Music Hall, a musical variety show. For over a decade the Kraft Music Hall, which aired on the NBC network, remained a very popular feature on American radio. These shows were always broadcast live. By 1945, Crosby felt that the time commitment of a weekly live radio show had become an unacceptable burden on his family life. Crosby's desire to pre-record the show put him on a collision course with NBC executives, who refused to consider any option other than a live broadcast. Crosby refused to do the show. NBC sued, forcing him to finish the 1945-46 season. Looking to increase its ratings, ABC approached Crosby with an offer. He could pre-record his own show, but with one proviso: the quality had to be as good as a live broadcast. Crosby accepted and immediately threw himself into using the recording technology of the day, electrical transcription, a phonographic disc format which had been developed for radio in the late 1920s.

Crosby's 30-minute show was called the Philco Radio Hour. Two discs were needed to record the show. Very quickly, Crosby discovered the weaknesses of electrical transcription technology: the sound quality was inferior to the live broadcast; and editing, which is one of the great potential benefits of pre-recording, was very cumbersome. The inferiority of the technology hurt the show's ratings. With his show struggling, Crosby was receptive to any new recording technology that would improve the show's audio quality. John T. (Jack) Mullin, an electrical engineer, working with wartime German technology, would provide the answer. 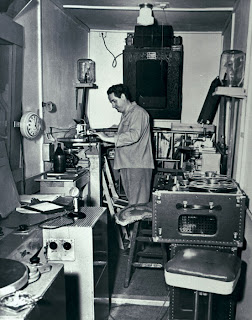 Born in San Francisco in 1913, Mullin attended Santa Clara University and majored in electrical engineering. During World War II, he worked on a variety of wartime electronic projects. While in England, Mullin was struck by the quality of pre-recorded music broadcast from German radio stations. Electrical transcription technology could never produce this exceptionally high quality. “How were the Germans doing it?” he wondered. In 1944, he got his answer. That year he was sent to Paris to examine captured German electronics equipment. At one point, he visited a German radio station where he discovered the AEG Magnetophon K-4 studio magnetic tape recording machine. Given permission by the U.S. government, Mullin brought two units back with him, along with 50 reels of blank magnetic tape made by I.G. Farben. The I. G. had been created from a merger of several German firms, most notably Bayer, Hoechst, AGFA, and BASF, and by the 1930s, the I.G. was the world’s largest chemical manufacturer.

As soon as he returned to the United States, Mullin set about improving the quality of the AEG Magnetophon machines. He changed the recorder's bias circuitry to further improve the signal-to-noise ratio, added pre-emphasis for higher frequencies, and replaced all the components with standard U.S. parts. Together with his partner W.A. Palmer, in 1946, he produced their improved version of the AEG machine. This magnetic tape recorder was first demonstrated at a 1946 meeting of the Institute of Radio Engineers (IRE) in San Francisco. The engineers, who were at the demo, all marveled at the high quality of the recording. Though it was a technical "tour de force," no one in the entertainment industry was ready yet to embrace it, until Mullin demonstrated the machine to Crosby in 1947. Immediately, Crosby asked Mullin to do a test recording of the Philco Radio Hour's first show of the 1947-48 season. Not only did the quality of this recording rival the live broadcast, but it also offered superior editing capabilities. Crosby was ready to pre-record his shows for the entire season, but he and his team had two concerns: would there be an adequate supply of recording devices and, if so, would there be enough magnetic tape to feed them? The season was about to start and Mullin had only his two machines. Enter Ampex and 3M.

Ampex, founded in 1944 in the San Francisco Bay area, produced small electrical motors and generators for the war effort. After the war, Ampex had to rethink its product line. Company founder Alexander Poniatoff decided to gamble its entire future on magnetic recording technology. Working with Mullin, its engineers produced two prototype units that worked well. Now the challenge was to go into production, but Ampex was unable to raise the needed capital. When Crosby heard of the difficulty he sent Poniatoff a check for $50,000 — a considerable amount of money for 1947. Crosby was determined to use this technology. His commitment did not stop there. He also invested money in Minnesota Mining and Manufacturing (3M), the company that was to produce a reliable supply of good quality magnetic tape. "[3M] ... had started development of their new red oxide tape that would work with the Ampex recorder. Jack Mullin began to work with Robert Herr and William Wetzel of 3M conducting tests to help develop a high quality magnetic tape for audio recording. ... The result was the Scotch Magnetic Tape No.111 that later evolved into the No. 111A that became the standard of the recording industry." Crosby recognized the long-term potential of this technology beyond his own radio program. As he did with Minute Maid, Crosby obtained exclusive west coast distribution rights from Ampex and 3M. After Crosby's entry into magnetic pre-recording, other radio programming followed suit. The 3 May 1948 issue of Newsweek featured this breakthrough in recording technology.

No sooner had Crosby adopted magnetic pre-recording than the "laugh track" was introduced for the first time on radio. Removing small mistakes on a tape had created short gaps in time. To fill in these empty spaces, Crosby suggested to his technicians that they introduce pre-recorded laughter after those jokes that he liked. Magnetic recording prompted other innovative applications like the 1948 show Candid Microphone. The creator of the program, Allen Funt, would go out and put unsuspecting individuals in awkward, but humorous situations, secretly tape their responses, and then play back the responses on radio. Funt later adapted this strategy to television with the popular show Candid Camera.

Crosby was not merely content to finance the innovation of others; he also saw the need to develop an in-house capacity to innovate. For the Kraft Music Hour, NBC had provided the engineering know-how to produce the show. But with ABC, Crosby wanted to use his own in-house audio engineering expertise. So in 1948, he created the Electronics Division within Bing Crosby Enterprises and hired Mullin as its “Chief Engineer.” Frank Healy, who was a former Hollywood producer, headed up the Electronics Division. When Crosby moved into television, he immediately thought of pre-recording his shows. The only technology available at the time was through film, which Crosby used in his early shows. As early as 1951, Crosby had asked Mullin if television broadcasts could be taped like radio. Mullin replied there was no reason why such a system could not be developed. At this point, Crosby created an R&D component within the Electronics Division and poured money into this quest to invent the first video recorder for television broadcasting, which at this point was still in black and white.

In November of 1951, Mullin demonstrated a prototype of a video recorder to the Hollywood press. Though still a very crude device, Healy used his talents as producer to convince the press corps of the machine’s great potential. The demo made the news in Variety. In a sense, this demo was the shot fired that started the race to invent a commercial video recorder. Ampex jumped in. RCA’s giant R&D machine also jumped in. But its goal was more ambitious — to invent a recorder for color television. Mullin soon discovered that moving from a crude prototype to a commercial machine proved much harder than he could have ever imagined. Crosby's first TV show had to be pre-recorded through syncing magnetic audio recording with 35mm film recording. Crosby's Electronics Division was not the only group trying to invent the video recorder. Crosby, pragmatically backing two horses, also encouraged the Ampex group.

In 1956, Ampex won the video recorder race, at least for black and white broadcasting. A day before the official start of the annual convention of National Association of Radio and Television Broadcasters (NARTB) in Chicago, Ampex staged a successful demo of their video recorder. The 300 invited guests from the networks were caught completely off guard. They did not know that they were coming to see the first video recorder. As the guests sat listening to the VP of ABC give a speech, little did they know that it was being recorded. Then the curtains opened as the speech was replayed on several televisions around the room. After a few moments of stunned silence, the crowd broke into applause and stomped their feet in approval. Word of the video recorder spread like wildfire throughout the convention. The crowds wanting to see it were enormous. 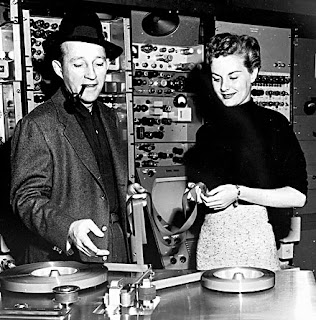 In September 1977, Bing Crosby pre-recorded his last television show in London, U.K, with the rock star David Bowie. Just a month later, on 14 October 1977, the remarkable life of this entertainer, businessman, and champion of recording technology came to an end. The show aired on 30 November 1977. This year, 2012, on the 35th anniversary of his death, Crosby’s talents live on through a technology that he helped champion... 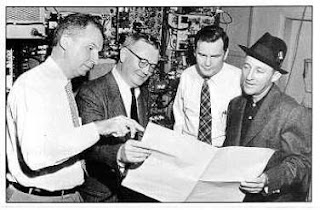 SOURCE
Posted by David Lobosco at 4:57 AM