Returning from an evening out with Mona Freeman during which they attended Claudette Colbert's party on October 11, 1953, Bing had an automobile accident at 5 a.m. at the junction of Wilshire and Sepulveda Boulevards in Hollywood in his Mercedes Benz sports car and has a "severely wrenched back". He is taken to his home by a passing motorist and had to miss several days of filming.

Representatives of the State Highway Patrol say that Bing "showed no signs of being drunk and that there was no indication that Mr. Crosby was driving recklessly" when involved in the accident on October 11. 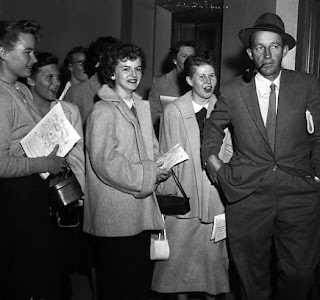 (FROM 1954 PHOTO CAPTION):
Hollywood -- Female autograph fans are ignored by singer Bing Crosby as he arrives at Los Angeles Superior Court to appear in connection with a $1,000,000 damage suit brought against him as the result of an auto accident. The suit has been settled for $100,000, Crosby's lawyers announced. $67,500 went to fireman Frank H. Verdugo, driver of a car which collided with Crosby's $12,000 sports auto early October 11th, 1953. Verdugo's wife, Lucy, got $27,500, and her brother Eulalio Perea received $5,000. Verdugo charged that the crooner's faculties the morning of the accident were impaired "by reason of being without a reasonable amount of sleep for an unreasonably long period of time." He also asserted that Crosby had been drinking and charged him with driving with "utter disregard for the life and safety of others."

SOURCE
Posted by David Lobosco at 4:37 AM