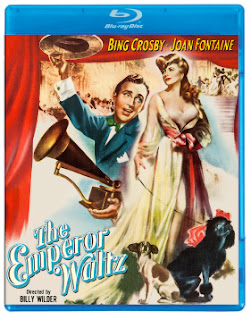 While 1948's The Emperor Waltz is not Bing's greatest movie, it will still be great to get it on Blu-Ray!
From Billy Wilder, the brilliant director of Five Graves to Cairo, The Lost Weekend, Sunset Boulevard, Some Like It Hot and Witness for the Prosecution, comes this delightful musical comedy starring screen greats Bing Crosby (Road to Morocco, Going My Way) and Joan Fontaine (Kiss the Blood off My Hands, Suspicion). American gramophone salesman Virgil Smith (Crosby) wants to sell his wares in pre-WWI Austria. To get the ball rolling, he hits on the idea of going straight to the top and selling one to Emperor Franz Joseph (Richard Haydn, No Time for Love, The Sound of Music). First off, the palace guards think he’s carrying a bomb and he’s arrested. He subsequently meets Countess Johanna von Stolzenberg-Stolzenberg (Fontaine) and, after the usual misunderstandings, falls in love with her. She falls in love with his dog, Buttons. The relation is fraught with obstacles and the emperor thinks royal blood marrying a commoner is bad darts altogether—what is to become of Smith and his countess? Co-written by Wilder and his frequent collaborator Charles Brackett (A Foreign Affair, Arise, My Love), this charming farce garnered Oscar nominations for its wonderful score by Victor Young (The Paleface) and elegant costumes by Edith Head (Sabrina) and Gile Steele (The Heiress). 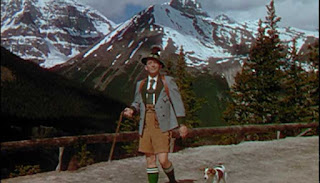