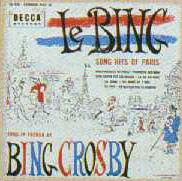 Le Bing is a 1953 album by Bing Crosby. It was Crosby's first long-playing album, and was released by his longtime label Decca Records. Le Bing is a concept album where all the songs are sung in French.

Crosby recorded the album in Paris on May 16, 1953, during an extended visit to Europe that spring. He had filmed parts of the movie Little Boy Lost in France the previous year. The orchestrations were by Paul Durand, a French arranger who also worked with Edith Piaf, among others.

Le Bing was released later in 1953 as a 10" LP and in December Billboard magazine called it "very nice," saying: "This set could move very well."

Two songs - "Embrasse-Moi Bien" and "Mademoiselle de Paris" - were recorded separately in English at the May 16 session but weren't released on Le Bing. All 10 tracks were released by Sepia Records on the 2010 CD Through the Years: Volume Five (1953).

In 1958, after Crosby had left Decca, the label issued a compilation album titled Bing in Paris, subtitled "Bing Crosby Sings the French Hits." Unlike Le Bing, some songs on Bing in Paris are sung in English. 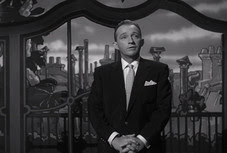 Posted by David Lobosco at 4:07 AM