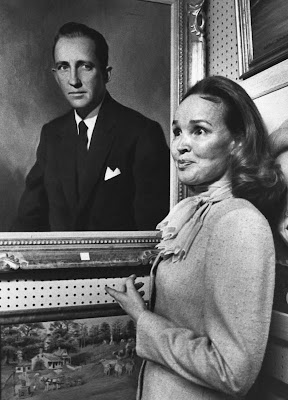 Here is an interesting article that appeared in People magazine in 1982...

"I'm trying to keep my head above water. But you get to think that in India they had a good idea with the widow just throwing herself on the funeral pyre. It would have been simpler that way."—Kathryn Grant Crosby

In life, he was Der Bingle, the ineffably relaxed and good-natured crooner whose ingratiating movies, records and TV specials made millions of dollars and left millions of Americans feeling better about themselves. But five years after his death, another, darker portrait has emerged of Bing Crosby: a distant and aloof father, an emotionless friend and, according to one 1981 biography, Bing Crosby: The Hollow Man, a person whom no one really knew. Both in life and in death the staunch protector of Bing's reputation has been his strong-willed second wife, Kathryn Grant Crosby.

Yet now, at 48, Bing's ambitious and determined widow finds herself at the center of a controversy that is reopening some old wounds in the oft-troubled Crosby family. At issue is Kathryn's seemingly innocuous decision to auction off some of the possessions Bing had accumulated over the years in six homes. Four days this week, a San Francisco auction house will gavel down more than 14,000 items of Crosbyana. The lode includes everything from Bing's golf clubs, fishing rods and shotguns to valuable English hunting paintings, his 1967 Aston Martin, his favorite photos (with Hope, Sinatra and Dempsey) and even his first recording (1926's I've Got the Girl). Some of the items are startlingly personal: Bing's pipes will go on sale, as will his platinum records for Silent Night and even the bed he and Kathryn shared during their 20 years of marriage. "It was a very emotional time for me," asserts Kathryn of the process of sorting out Bing's things. "It was painful." Bing's bed, she says reverently, "still has his hair oil on it." Of a favorite chair (also on the block), she asserts that "to sit in it and rub the wood that his fingers touched is very special." The auction, she insists, was meant to be "a celebration. It's for Bing. It has to be fun because that's what he was all about. It's important to share his things with the people who loved him." Kathryn says she discussed the sale with her children—Harry Lillis III, 23, a sometime actor and now a Fordham University business student, Mary Frances, 22, who played the conniving Kristin on Dallas, and Nathaniel, 20, last year's U.S. amateur golf champion.

As for Bing's four sons by his first marriage, to Dixie Lee, who died in 1952, Kathryn says, "The older boys have been so good about it. They think this is the ideal thing to do." But not all of Bing's family remember it that way. "I don't know anything about the auction," says son Dennis, 47. "She didn't ask me to look through anything." Nathaniel says, "I'm not sure what's going on," and admits he was "surprised" that Kathryn is selling some of his father's old awards and trophies. "That bothers me," he says. "I might have to have a talk with the little lady." Then he hastily adds, "I don't think she's trying to tamper with Dad's memory. I think my father's belongings have somehow affected her progress in life. She has very vivid memories of him." Bing's younger brother, Bob, 67, a bandleader, disgustedly calls the whole idea "a flea market; I'm horrified." He says, "Kathryn never asked me or my sister [Mary Rose] if we wanted anything." The fact is that there is little love lost among some of Bing's bumptious first family. Gary, 48, and Dennis' twin, Phillip, are openly hostile. "As far as I'm concerned, Phillip's dead," says Gary. "He isn't worth the powder to blow him to hell." Replies Phillip:

"Gary has a two-by-four on his shoulder. He's embarrassed his family too many goddamn times." Only Gary and Lindsay, 44, will come up from their homes in the L.A. area to attend this week's auction; Phillip and Dennis are staying away. No one denies Kathryn's right to do what she wants with Bing's estate. "A lot of people want things that were Dad's, and they don't do anyone any good in the attic," says Mary Frances. Several of Bing's homes have been sold. "I was storing furniture everywhere," Kathryn explains. "Some antique-dealer friends said, 'Honey, why don't you have a garage sale?' " Going through it all, she recalls, "I cried daily. I suddenly became the age I was when an item first entered my consciousness, like the top hat Bing wore the night in 1955 he took me to the Academy Awards." She sees herself as the keeper of a special flame. "He was the man I loved," Kathryn says, brimming with tears. "He was the man whose children I wanted to bear. And, miracle of miracles, that happened." Kathryn says the idea that she is selling off Bing's things because of her financial difficulties is ridiculous. "I have been beautifully provided for by a very loving husband," she insists. But others say that, though Bing's estate is worth close to $30 million, the strings on his will are tight. Phillip says he gets $3,000 a month and won't receive part of his inheritance until 65: "I could hear Dad saying, 'When they're 65, how much trouble will they get into then?' "

Eldest son Gary calls the monthly check "kind of emasculating" and adds, "I don't think he'd do it any differently for Kathryn." Speculates her brother-in-law Bob: "I imagine she needs the money." Kathryn's supporters say that she's really paying the price of so loyally guarding Bing during his life. "She got the reputation of being a bitch when she was just doing what Bing wanted her to," says Rosemary Clooney, a longtime family friend. The daughter of a West Columbia, Texas schoolteacher and politician, Kathryn came to Hollywood as a beauty contest winner and onetime queen of the Houston livestock show and rodeo. She landed a movie contract at 19, wrote a column ("A Texas Girl in Hollywood") for a string of home-state papers, and met Bing at Paramount the year after Dixie Lee died. Four years later they wed in Las Vegas. "I remember thinking when they married, 'I wouldn't give that spot to a leopard,' " Gary says. "It wasn't easy being Mrs. Bing Crosby." By most accounts, the marriage was a successful one. "She was the most wonderful thing in Dad's life," says Mary Frances. "She was so full of life and love." Son Lindsay agrees: "She was extremely good for my dad." With typical determination, Kathryn carved out a series of professional lives apart from Bing's. She earned a nursing degree, won a California teaching certificate, wrote her autobiography, hosted a half-hour TV talk show for three years in San Francisco, and appeared on many of Bing's TV specials with their children.

Her friend Rosemary Clooney recalls that "Bing lived in a very grand style, and for a little girl from Texas that was quite a jump. She wore black until she was 30 because she thought it was expected, being married to an older man. She went about it as a student—she studies and learns." Kathryn stoutly denies the charge that Bing was a cold and emotionless man. "He thought outward displays of affection were sissy," she explains. "That's your good Jesuit boys' school upbringing." At home he "liked to put his feet up on the Louis XVI table," she recalls. "He dropped his raincoat on the English heraldic chairs in the front hall. The dogs were always in the house. But it was a home, it was the way Bing wanted it." Moreover, she insists, "Bing was the best father he could be to all his children." The couple locked horns "quite often, but not on things of real importance. I tended to buy West Los Angeles if it struck me, and Bing would say, 'You may not have one more wastebasket for this house!' " Yet she admits she was as exacting as Bing. "Nothing was ever enough," she says. "I was never good enough. The children were never brilliant enough. Contentment is not in my nature, but maybe it's time to be contented. I don't have to make it perfect anymore. I'm not sure we had a great marriage, but we lasted 20 years and possibly would have gone 20 years more." Then she backtracks. "My marriage was a great marriage. I think every wife should feel that way."

Her first year of widowhood, she says, was "absolute lunacy. You lose all your married friends. You can't go out with the same people or do the same things anymore. I survived by holding on to as much of Bing as I could. Since he traveled so much, I could pretend for a long time that he was coming back." Everyone grants Kathryn respect for the toughness she has shown since Bing's death. "I can't think of a person who needed less support than Kathryn," says Phillip admiringly. "Kathryn believes the best way to get things is the pleasant way," Gary adds, "but if she needs to she can hit you over the head with a hammer." Even her friends concede that Kathryn can give the wrong impression. "She can have a lot of phoniness," allows Ann Miller, her TV producer, "but I believe it's because of what she thinks is expected of her. Kathryn is afraid to be Kathryn sometimes."

These days Kathryn is redecorating the 24-room Crosby mansion in the tony San Francisco suburb of Hillsborough. Up early, often at 4 a.m., she writes and spends an hour with her bookkeeper, with whom she then plays a four-hour game of chess. She has written a biography of Bing (although a dissatisfied Simon & Schuster has sued to get its $33,000 advance back). She's also resumed acting, touring with Same Time, Next Year and Guys and Dolls and playing at San Francisco's American Conservatory Theatre. Kathryn says she does not date, though some friends have linked her romantically with Bill Sullivan, 56, a Yale-educated publisher of scholastic materials and Crosby chum who is a trustee of Bing's estate. Arleen Crosby says they're living together. Kathryn and her friends say firmly they're simply old pals. "I don't see myself marrying again," Kathryn says. "I don't even feel 'come-hither' anymore. After a certain point it's all over." "She doesn't have a relationship, but I'm sure she dates people," Clooney says. Kathryn, oddly heated, denies even that. The widow of the crooner who sold 400 million records is still wedded to one role. "I want you to understand," she says with a stony look, "that my position in this world rests on being Mrs. Bing Crosby."

SOURCE
Posted by David Lobosco at 6:12 AM