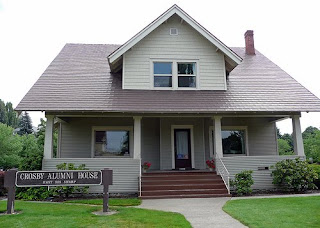 If you go on the historic home tour in the Gonzaga University area is from noon to 5 p.m. Tickets are $15 and available at 329 E. Sinto Ave. during the tour. Children 12 and under are free.

A highlight will be a stop at the Bing Crosby House where the crooner spent a large part of his boyhood.

The house was completed in 1913 by Crosby’s father and two uncles, and the family lived there until it was sold in 1936.

The tour is a fundraiser for Spokane Preservation Advocates, which uses proceeds to support historic projects.

Crosby’s fame as a singer and Hollywood film star continues to interest people nearly 34 years after his death.

While the Craftsman-style Crosby House, 508 E. Sharp Ave., is used for a pair of GU administrative programs, it is also something of a tourist attraction in Spokane.

GU psychology major Sara Galgalo, of Spokane, greets visitors from as far away as New Zealand and Denmark, she said.

Just last week, three people stopped in while on a trip from Washington, D.C.

“I get a few young people” as visitors, Galgalo said. “But normally it’s the older generation.”

The interior of the main floor is largely the same as it was when the Crosbys built the house. It has extensive woodwork done in the “curly fir” style that was popular in the period. The floors are a fine white oak. A mantel and bookshelves along the west wall have cutouts that are characteristic of the Craftsman era. The original quarry tile in front of the fireplace remains intact, although the brick on the fireplace itself has been painted white.

Mac McCandless, of GU’s plant services department, said the university wants to maintain the historical integrity of the house.

Harry Lillis Crosby was born in Tacoma on May 3, 1903, one of seven children.

Crosby acquired the nickname Bing as a boy from a comic newspaper feature called the Bingville Bugle with a leading character named Bingo.

In 1921, Crosby joined a six-piece combo called The Musicaladers, playing at dances, parties and a restaurant on Riverside Avenue.

According to GU, the manager of the Clemmer Theater, now the Bing Crosby Theater, hired Crosby and Al Rinker for live shows before movies for several months in 1925.

That fall, Crosby and Rinker left Spokane for Los Angeles, where they joined the vaudeville circuit, a move that led to Crosby’s stardom. By 1926, they were recording with the Paul Whiteman Orchestra.

SOURCE
Posted by David Lobosco at 5:26 AM