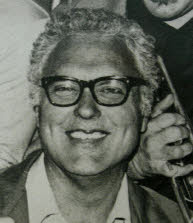 A Sound That Will Last Forever

Film music buffs cite Jerry Goldsmith’s score for Chinatown as one of the all-time best, but relatively few people know who played the memorably moody trumpet lead. It was the same man you hear on the soundtrack of An American in Paris and countless other MGM musicals. Uan Rasey died last week at the age of 90.

His eyesight was impaired in recent years, but that didn’t stop him; nothing could. He’d already spent most of his life in a wheelchair as a result of polio. Looking back on his childhood, he said, simply, “There was a limit to what I could do; I couldn’t run out and play football, so I played trumpet.”

Bearing a name his mother liked because it was unique, Uan grew up in Montana and took up the instrument at—

—a young age. He told me, “I was lucky because I didn’t know, I thought everybody could play high Gs. I came down here [to Los Angeles] and nobody could read. High C was a high note. I heard Cootie Williams or other guys play on the radio in Montana, and imitated them.”

In Los Angeles his reputation spread pretty quickly, and he started playing with big bands while he was still a teenager. This led to work on radio shows and in movie studio orchestras. Ultimately, he was wooed by MGM to become a full-time staff musician there. He was flattered, but still had his priorities: Uan was crazy about track and field, and wouldn’t think of missing a Saturday meet, let alone the Olympic games. He turned down MGM’s offer multiple times and finally said, “I want to have it listed [in my contract] that I want to go to the Olympics in ’52, and I don’t want to work on Saturdays… If you write that down, I’ll come out…” They capitulated, and he joined the prestigious orchestra in 1949, just in time to participate in MGM’s golden age of musicals.

He even worked on the MGM cartoons, and had nice words to say about the man who wrote the scores for Tom & Jerry and the Tex Avery shorts, Scott Bradley, calling him “a good writer…did a good job and kept you on your toes, you know?” I said the scores sounded awfully energetic. “They sure are,” he replied. “They’re fun to play. We had a good time doing it. Nice guy, too. [And with conductors] you used to say, ‘He’s a nice guy, let’s go help him.’ ”

On the other hand, the legendary composer Bernard Herrmann was “always so unthankful. It’s his attitude, you know; the music was everything. He even did, one time, one trumpet and sixteen bassoons, where there were contrabassoons, regular bassoons… and it never was good enough for him. He finally did Taxi Driver, remember that picture? And he [wouldn’t] conduct. Finally, I said something because he just sat there. Jack Hayes was the orchestrator so Jack said, ‘Let’s just start playing, you know, let’s do something,’ so we just did it and we played cues, got through it. He sat in the booth and said very little. I guess we broke for lunch and came back and played later on, the jazz scene. So-called jazz. (You know, I play ersatz jazz; I’m not a great jazz player, not at all, but I play what the leader wants. You know, you’re there to please them.) So he came out and thanked us, thanked me especially. ‘Thank you, Uan.’ Uan—he used my name! My God, after all these years, maybe sixteen years… and he died that night. First time he ever thanked us. Ironic, at least.” 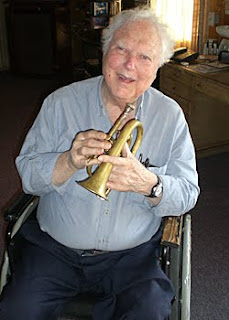 I love hearing Uan playing on Bing Crosby’s late 1940s radio shows, when at the end of each episode his soaring trumpet sings out Crosby’s theme, “When the Blue of the Night Meets the Gold of the Day.” He rarely received credit on screen, but Crosby acknowledged him on one broadcast after an especially lovely solo.

Film music aficionados will always be grateful for the beautiful sounds he made.