THE HOLIDAYS, GOLF, AND BING 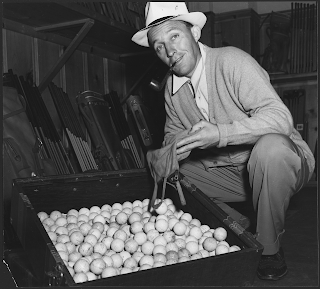 THE MOST WONDERFUL TIME OF THE YEAR TO REMEMBER BING
By Stan Awtrey, PGATOUR.COM Contributor

The holiday season wouldn't be complete without a viewing of "White Christmas." The days would be neither merry nor bright without watching the classic movie starring Bing Crosby and Danny Kaye and filled with some of the greatest songs ever written by Irving Berlin.

And while many of the scenes are filled with snow, you get the impression that Bob Wallace (the character played by Bing Crosby) would probably rather be playing golf with Major General Waverly (Dean Jagger) rather than getting ready for his next musical number.

That's because Der Binger probably loved golf more than almost anything else. He was most known as a singer and "White Christmas" is one of the season's seminal songs. He was also an accomplished actor who appeared in 86 titles and won an Oscar for his performance as Father O'Malley in "Going My Way." He produced albums and movies, owned race horses and was one of the world's most popular figures.

But those familiar with golf know that Crosby's real love was golf. He took up the sport when he was 12 years old, working as a caddy, but stopped playing until 1930. That's when he got the bug, at age 27, that would consume the rest of his life. He was an excellent player who was good enough to eventually compete in the U.S. Amateur and the British Amateur.

Crosby was a member at Lakeside Golf Club in Hollywood and won the club championship on five occasions. Among his career highlights was a hole-in-one on the 16th hole at Cypress Point, the famous Pacific-fronted hole where Ben Hogan used to lay up and hope to get up-and-down for par.

One of his major contributions to golf came in 1937 when he founded the Bing Crosby Pro-Am, most commonly referred to as the Crosby Clambake. Crosby drew the game's greats to the West Coast to play in the event, which was won by the likes of Sam Snead, Ben Hogan, Byron Nelson and Jimmy Demaret -- four faces that belong on golf's Mount Rushmore. The tournament began at Rancho Santa Fe Country Club in the San Diego area and moved to the Monterey Peninsula after World War II, where it endures today as the AT&T Pebble Beach National Pro-Am. First televised in 1957, today millions of viewers tune in for the pleasure of seeing the scenery from the Pebble Beach area. 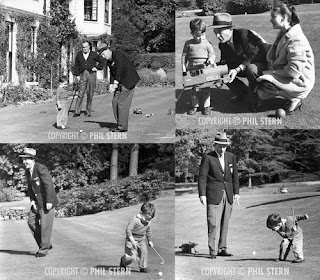 Crosby once said, "If I were asked what single thing has given me the most gratification in my long and sometimes pedestrian career, I think I would have to say it is this tournament."

Crosby even accepted an invitation to serve as a reporter during the 1958 Masters. He was hired as a stringer for the week by Atlanta Journal Sports Editor Furman Bisher, himself the greatest writer/columnist to ever come from the South. Bisher told Crosby to grab his pipe and walk around Augusta National, watch the players and make some notes about what he saw.

Crosby took his assignment seriously and turned in his work. Bisher, now 93 and still writing columns, has the hand-written notes from his special golf analyst. In one place Crosby wrote, "I like the looks of this Palmer kid." Nice call.

Ironically, it was Crosby and Palmer who would each help popularize the game. Oddly enough, the Clambake was one of the few events that Palmer never won. He was runner-up there twice, losing to Don Massengale by one stroke in 1966 and losing to Tom Shaw by two shots in 1971.

In 1977, Crosby died doing what loved the most. He died while playing golf in Madrid, having just finished a round with Spanish pro Manuel Pinero. His wife, Kathryn, remarked, "What an appropriate way for a golfer who sang for a living to leave this earth." A year later he was inducted in the World Golf Hall of Fame for his contributions to the game.

So when you're planning the holiday viewing schedule and set aside a couple of hours to watch "White Christmas," don't forget the role that Bing Crosby played in bringing golf into your living room. As he croons in another wonderful song, it's another way you'll be "Counting Your Blessings" this time of year. 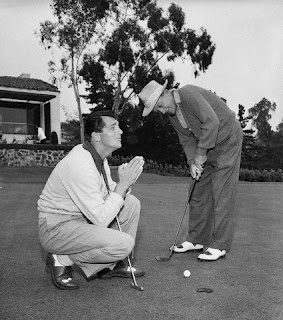 Stan Awtrey is a freelance columnist for PGATOUR.COM. His views do not necessarily reflect the views of the PGA TOUR.