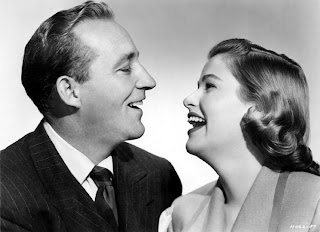 Here is a review of the forgotten Bing Crosby gem MR. MUSIC (1950). The review appeared in the NY Times on December 21, 1950. The newspaper is tough in its reviews, but they give a pretty glowing review on the movie and especially Bing...

To brighten the Christmas season, our old friend, Bing Crosby, is in town in a role (and an entertainment) that fits him—and he it—like a glove. In Paramount's "Mr. Music," which came to the Paramount yesterday, Der Bingle (which rhymes with Kris Kringle, we trust you will incidentally note) plays an easy-going song-writer who is coaxed into composing a musical score by a provokingly persistent young lady hired particularly for this job. And with newcomer Nancy Olson spreading much charm in the latter role; with Tom Ewell, Ida Moore, Charles Coburn and even Groucho Marx and Dorothy Kirsten lending assists and with one of the nicest sets of new songs that Jimmy Van Heusen and Johnny Burke have ever turned out, this "Mr. Music" is certainly one of the cheeriest and brightest of current films.

There's no point in being coy about it: Bing has not been too fortunate in the general characteristics of his roles in his past three or four films. But in this light, romantic entertainment, based on Samson Raphaelson's play, "Accent on Youth," he acts the sort of droll, informal fellow that he himself happens to be. And since Bing's genial songsmith in this story takes more joyously to golfing than to work, it's the sort of job that our hero can well wrap his golf clubs around.

Fortunately, Arthur Sheekman has turned Mr. Raphaelson's play into a lively exercise with words and music that ambles gaily across the screen. True, there are times when the action, confined largely to a penthouse drawing-room (where Mr. Crosby toys with his golf clubs just as happily as he does on the course) tends to lag slightly and grow feeblee. Even with Miss Olson as vis-a-vis, the sparring of boss and slave-driver drags just a bit now and then. 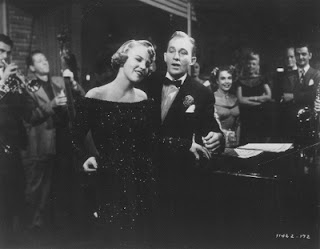 But regularly Mr. Sheekman catches up the lag with a nice bit of comic invention that Director Richard Haydn grabs upon and uses to keep the whole show going in a generally sophisticated style. It is notable that little condescension to the so-called juvenile taste is evident here. And the songs are adroitly integrated into the natural flow of the script so that Bing and the cast can get into them without pointing when they do the most good.

Best of the lot, for our taste, is a lightly philosophic rhapsody, "Life Is So Peculiar," which is done in several different ways. Bing and Peggy Lee sing it one time at a pent-house jamboree, at which the elastic young Champions, Marge and Gower, dance it spinningly. The Merry Macs also sing it in the ultimate musical show, put on as the songwriter's triumph, and Bing does it in a skit with Groucho Marx. This latter, incidentally, is a winning but strangely skimpy highlight of the film.

Next best is a smoothly melodious song of wistful love, "Accidents Will Happen," which Bing, after tinkering throughout, sings in a pleasing duet with Dorothy Kirsten. And "High on the List" is that, too. Otherwise "Wouldn't It Be Funny," "You'll Be Home" and "Wasn't I There" are in the category of wholly agreeable tunes. 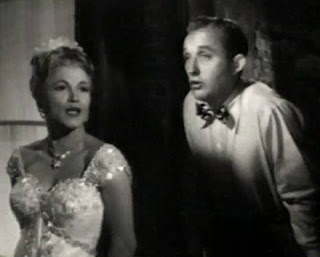 Miss Olson, who will be remembered as the young lady in "Sunset Boulevard," here demonstrates a thorough ability to handle a fragile romantic lead, and Charles Coburn is familiarly amusing as a harassed producer of musical shows. Ida Moore is chirpily comic as a starry-eyed chaperone, while Mr. Haydn, the commendable young director, is very funny in an asthmatic bit.

"Mr. Music" may not stack up with the best of the Crosby films, but it is certainly a contemporary achievement that the master may lean happily upon.

On the stage at the Paramount are Louis Prima and his orchestra, Jan Murray and Shirley Van.

SOURCE
Posted by David Lobosco at 5:14 AM