BEHIND THE HIT WHITE CHRISTMAS 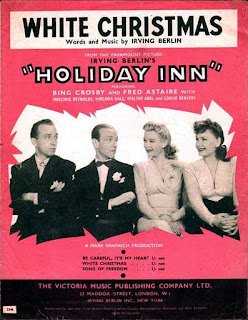 Behind the 1954 hit 'White Christmas'
By The Associated Pres

You know the movie "White Christmas," right? The one for which Irving Berlin wrote that famous song? The one starring Bing Crosby and Fred Astaire?

BZZZZ! That's the sound of the Wrong Answer buzzer. Because neither common belief is correct. Here's the scoop on Paramount's 1954 musical "White Christmas," airing on AMC twice Tuesday night at 8 and 10:45 through tomorrow (plus Thursday at 5:15 p.m.).

THE SONG 'WHITE CHRISTMAS' ACTUALLY DEBUTED in the 1942 film "Holiday Inn" (Thursday night at 12:30 a.m. on AMC). Singer-actor Crosby and dancer-actor Astaire were paired in that black-and-white film as a song-and-dance team at a New England inn, staging themed floor shows for holidays from Lincoln's Birthday to July Fourth to, of course, Christmas. Renowned musical composer Berlin wrote 12 songs for the film, but "White Christmas" is the one everybody remembers. In fact . . .

THE TOP-SELLING RECORD EVER is said to be Crosby's "White Christmas." His near-identical 1942 and 1947 recordings for Decca Records are reported to have sold 50 million copies. Including album versions, the total might be north of 100 million. Try finding a household today that doesn't own this melancholy/hopeful ballad on record (78, 45 or 33 rpm), CD or MP3.

SO THE MOVIE 'WHITE CHRISTMAS' was planned as a semi-remake of "Holiday Inn" featuring the original starring pair. Crosby was on board, but when Astaire passed, Donald O'Connor was offered the role. When he couldn't do it, Danny Kaye ended up as Crosby's partner. The Technicolor film was the first made in Paramount's supersharp widescreen VistaVision (used for "Star Wars" special effects). Opening at Radio City Music Hall, "White Christmas" became 1954's smash hit, raking in 30 percent more box office than any other film that year. 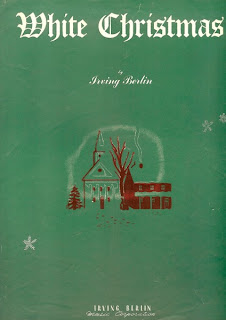 THE MOVIE'S 'SOUNDTRACK' ALBUM strangely features Peggy Lee singing the songs performed on-screen by movie co-star Rosemary Clooney (George's aunt and sister to his dad, ex-AMC host Nick Clooney). Clooney was a hot '50s pop singer ("Come On-a My House") recording exclusively for another record label. Lee rerecorded the film's songs alongside Crosby and Kaye. That album was included on CD with some recent DVD releases, but remains a rare find on its own.

SOURCE
Posted by David Lobosco at 8:11 AM