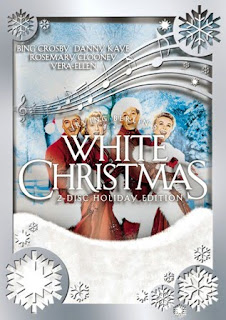 CHICAGO – Irving Berlin’s “White Christmas” with Bing Crosby and Danny Kaye was the #1 film of 1954 and has become an annual favorite for millions of families all the way back to the days before VHS. Paramount has released the musical charmer on Blu-ray with new special features along with a snowy 2-disc holiday DVD edition for those still waiting for Santa to bring them a Blu-ray player. Dream of a “White Christmas” in HD. First, a little history. The film “White Christmas” is not the origin of the song that gave it a title. It was reportedly sung before “Holiday Inn,” a 1942 film with Crosby, but that’s the film that made it popular (and, actually, a better flick than “White Christmas,” which is something of a remake of “Holiday Inn”).

With its longing for home, the song took off during World War II and won the Oscar for Best Original Song. It became immensely popular in the ’40s and the success of the song actually helped propel the success of the film in 1954, the biggest of that year by some margin. I have to start with a little blasphemy that could mean coal in my stocking — I’m a huge musical fan and love a lot of the road movies of Crosby and Bob Hope but “White Christmas” is just okay. Some of the music is great and the stars, especially a luminous Rosemary Clooney, are at the top of their game, but the story is pretty lackluster and Crosby and Kaye don’t have the same chemistry with each other or with their romantic leads as the best of this kind of material. While hearing and seeing Bing in HD sing the gorgeous title track is something musical fans should do, the overall film is not one of the best musicals of its period.

I love the song “White Christmas” but you can keep “Sisters” and “Count Your Blessings Instead of Sheep.” I recognize the cultural importance of “White Christmas” and, being a huge musical fan, can enjoy parts of it but I respect it more than actually like it. Having said that, the Blu-ray and DVD editions do a notable job for fans of the film. The HD 1080p picture is a bit over-polished at times, making Bing and Danny look more plastic than they should. What some people don’t realize about HD is that it’s a matter of balance. If you just turn up the colors and polish the grain, people start to look more unnatural than they did in the days of DVD and “White Christmas” has a few of those moments where it just doesn’t look right. And the audio has a few similarly frustrating issues. I suggest you switch over to the restored mono track, which sounds much clearer and more natural for the film. The special features on “White Christmas” are notable for a 55-year-old film and many on the Blu-ray disc are in HD.