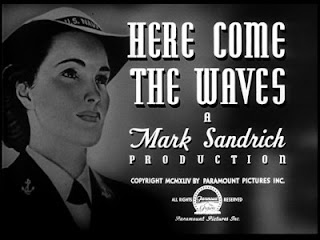 Here is the NY Times review of a great Bing war era movie, "Here Comes The Waves". The reviews from the NY Times have always seemed tough. I think this one is overall positive. How can you not like a movie with Bing!

Paramount and its favored son, Bing Crosby aren't going precisely the same way that they went in Mr. Crosby's last picture—and everyone knows which way that was—but they are taking an agreeable turn together in "Here Come the Waves," which trooped into the Paramount yesterday. They are ambling along that vein of comedy, with vamped-in music, that Mr. Crosby used to rove, and they have Sonny Tufts and Betty Hutton as convivial companions this time. Sure, the traveling is nothing like as charming as it was on that last prize-winning tour, but it offers a few attractive vistas and several gaily amusing jolts. 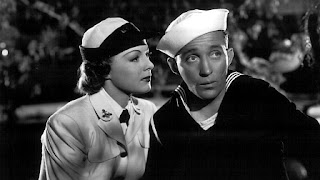 There are several scenes in the picture of Waves in training which are atmospherically good, and the settings contrived for the Wave show are well above regulation grade. Paramount, in short, has been generous to the service in every respect. But the humor is the best part of the picture—and the best part of the humor is that which has Bing crooning in travesty of a famous "swooner" who shall be nameless (just this once)... 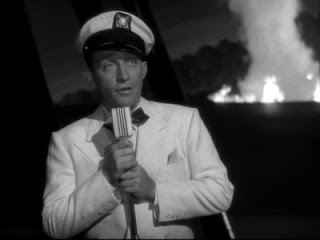