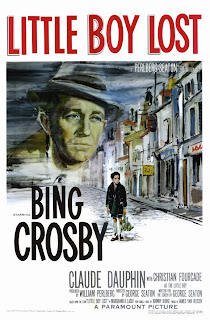 Steve Fay is a huge authority on Bing Crosby. He runs an excellent Bing Crosby forum which you can visit here.

I am still a bit stunned, the film having concluded moments ago. I had read a bit about it a few times before, but did not realize how powerful of an effect it would have. In its dramatic weight it reminds me somewhat of "The Country Girl," this partly also because Bing's character is not altogether sympathetic at times.

I was born in the year before this movie was released, more or less during the present time of the second half of the action. It was a time when Europe's continuing recovery from WWII was not exactly center stage in the minds of average Americans, not enough that a youngster here would have noticed adults around him or her being very mindful of it. The war itself, in the decade following this movie's release, was mostly the subject of war-time adventure movies starring John Wayne, Van Johnson, Audie Murphy, and others, and the aftermath of the war in movies, with few exceptions, was more like "White Christmas." My uncles and my father, all in the service during the war, didn't talk much about it. A friend's father who served in the Marines in the Pacific pointedly refused to answer any of his son's questions about his time in the war, beyond that he found some lifelong friends who then lived in Austrailia. And we had no bombed out ruins in Illinois as reminders. What a surprise when I watched Winston Churchill's funeral on TV when I was in grade school to learn that some buildings in London had yet to be rebuilt as late as then.

When I was growing up, there must have been children around me who lost fathers in the war, but I don't recall this ever being spoken about. I recall families stricken by accidents and disease, divorce or even job loss, but not by the aftermath of WWII. Many unpleasant things were not spoken about, at least in front of children in those days -- "Little pitchers have big ears," my father would say and the subject of the adult conversation would change. Being rather confused, I thought he was talking about baseball. Of course, were I a child growing up in Europe or Britain at that very time, even if adults chose not to talk very much about the war, I still very likely might have seen some unignorable evidence of the war's violence to my town and the surrounding landscape. I might have known of war orphans in my town. 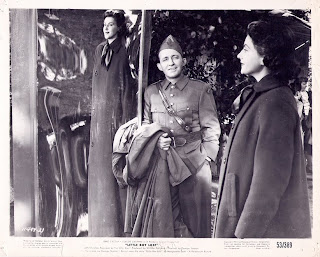 All of this makes me wonder what this kind reception this film might have had in American theaters, at a time when we here spoke little of that war anymore and called our involvement in Korea a "police action." Would movie-goers want to see our jaunty Bing Crosby living half in the past and half-tortured with the question of whether a somewhat odd and uncoordinated French orphan might actually be his son rather than someone elses? And, in the subsequent years, would such a movie be high on the list of those TV stations would replay in their program schedules (I don't remember seing it on TV)? While it is intensely the story of a war-broken family, representative of countless others, it might not have been regarded in 1950s and 60s America as "family entertainment." Perhaps others know much more than I about how well the film was greeted in the US and elsewhere. 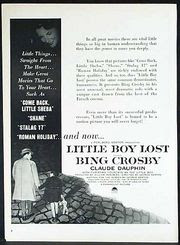 Regarding the structure of the film, it is a story that spans several years, both for the characters involved and for international history. How to condense time and connect scenes scattered over a long period is a challenge for filmmakers. I wonder if there is any other film of Bing Crosby's in which he speaks anywhere near so many lines of narration. Could not action have been used to dramatize more, doing without so much exposition, one might certainly wonder as the film progresses. Yet, the pattern of Bing's character narrating makes it possible for him to speak his misgivings directly to the audience after his first meeting of the boy and the crusty Mother Superior who ran the orphanage in the film's second half. I'm not sure how we could have learned that so well otherwise.

Then, too, much of his misgivings are dramatized, as with his physical distance from the boy much of the time at the start of their first walk together, partly because he was counseled not to be too emotional by the old nun, but likely also the result of his doubts. The character of the old nun is quite fascinating, partly because she ultimately reveals two characters: the stern one administering the orphanage somewhat dispassionately, and then, toward the very end, a deeply caring protector of the children -- a war veteran certainly herself -- and a powerfully committed advocate for their having a future. What an interesting contrast this movie seems to make when compared with "Bells of St. Mary's," not only because the latter is more obviously a heart-warming movie throughout, but also because there is no Father O'Malley in this religious establishment ... unless there is a small touch of his street-wise insight and optimism in the old nun running the orphanage. 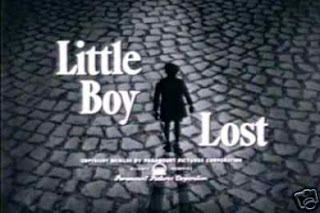 It was so, so long after the brief scene in which Bing sang at a party with Lisa, his wife-to-be whom he had just met, in the beginning of the film, before he sang again in this movie that I stopped expecting him to sing more. Then eventually I began to think, when a few more songs finally occurred rather naturally in later scenes, that these songs had to be there. What an intensely sad and troubling movie it might have been if not for those few songs slipping in during the second half.

That several people proceed (in inevitably conflicting ways) to try to help the boy and Bing unite as a family, and in doing so succeed more in complicating Bing's character's decision about whether he is his son and whether or not to take him in any case, certainly frustrates a viewer's expectations for how things might work out for the good. That near the end of the film, Bing and his old French friend from before the war reach what may be a breaking point in their friendship, because the friend insists Bing accept Lisa's violent death during the war, place's Bing's character in an even more troubled and psycologically ALONE position as he prepares to leave the town where the orphanage is located to return to Paris. He is saying this is to take time to come to a decision about the boy, but his secret agreement to travel with a blonde flusey promising to help him forget for a few days, creates another situation in which we not only must begin to agree with his old friend that he is self-delusional, but we also don't like him very much.

We don't like him (or is it his human frailty and self-doubt) until his own concience, triggered by a trainwhistle and a memory, makes him return to the orphanage, to discover that the boy (Jean /John) has recognized something from the past that no one could have prompted him about. I admit, I couldn't help misting up. 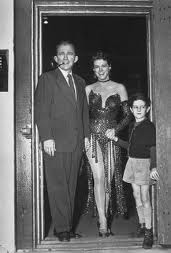 In one neighborhood where a I grew up a friend's mom, I learned, was a "war bride" from Italy. Maria was a very sweet lady, who my mother liked very much. If she had a sad tale to tell about her town during or after the war, I never heard of it. She was just Mickey's mom. In school, I read of the Marshall Plan, our helping Europe rebuild, but I don't think those paragraphs mentioned orphans or that the rebuilding was still going on. But in high school I had a teacher who had been about my age when his city of Stettin, Poland, was traded among armies during and just after WWII. His first library, in the basement of a bombed-out building, consisted of books he had collected from the rubble of his city at age fifteen. A college teacher I had years later, had grown up in utter poverty with her mother in a European town very slow to recover from that war.

Perhaps it is that "Little Boy Lost" is wholly set in France, and briefly Britain, without hardly any mention of life in the USA, that causes me to continually revisit what I knew (and when I knew it) about that setting, particularly Europe after the war. There is actually far less mention of life in America in this film than there is in "Casablanca." Mentionings of happy neighborhoods back in the old USA pepper nearly every war movie I can remember, but not this one. In this film, while we suspect Bing's character will return to his home country eventually, with his son if he determines he has found him, America is not held out as some dream place where they will live happily ever after, as is the case in more than a few American war movies. The film keeps us far too deeply worried about whether he will identify who he and his son are and what his true dream and future are, and whether that will include the boy. A peaceful and happy America isn't employed as shorthand for the solution in this film. As the old nun clarifies the question of whether Bing's character and the boy need each other in order to both find their futures is the key issue. And to her, the boy is one of many whose welfare and futures keep her awake at night. While the film lets this one family mend, we acknowlege gratefully, I don't think it means to let us forget that this orphan and his father are but representatives of many. That is a much more serious dose of reality than many people might expect from a Bing Crosby movie, or an American musical movie of its time.