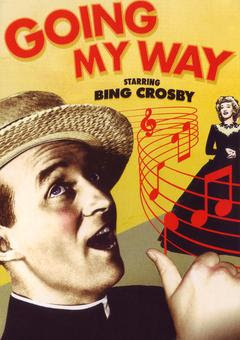 A church, a broken window, some piano playing, singing, and two priests not getting along so much. That about explains the 1944 Best Picture winner Going My Way, starring Bing Crosby, and it was JUST AS EXCITING AS IT SOUNDS!!!!

Crosby plays Father Charles “Chuck” O’Malley, a young up-and-comer (if priests can even be referred to as “up-and-comers”) heading to a new congregation for his new post. Father Fitzgibbon (Barry Fitzgerald), the old school Elder Priest or something, disagrees with O’Malley’s ways, which really just includes real, grounded friendships, playing golf, and teaching children how to sing (The horror!). Fitzgibbon’s disapproval doesn’t really make any sense, but neither does religion sometimes. OH SNAP! A scandalous blog I lead, I know. Other characters float in and out, like a girl who ran away from home, some kids O’Malley teaches to sing, and a few others, but they don’t really matter too much because there isn’t really much of a plot and the film’s pieces rarely connect the puzzle. The movie was well-paced though, (which as you know by now is so crucial to me when I’m watching older, black and white films), and enjoyable enough.

Fun Fact: This movie won a helluva lot of Academy Awards (7!) and was the first and only time an actor was nominated for Best Actor and Best Supporting Actor. Fitzgerald lost to Crosby for Actor, but then snagged the Best Supporting trophy.

But before I start sounding like a Negative Nick about Going My Way, we should all hail the mighty Crosby – whose trademark bass-baritone made him a star on screen, in the recording industry, and on radio (he has three stars on the Walk of Fame to prove it). Some of these old-timer films simply exist as a vehicle for a super-mighty-talented guy to show off his super-mighty-talented talent, and Bing Crosby is “a dreamboat,” as one of my Facebook friends leisurely commented one day. The guy has mad skillz and no one can argue with that. Listening to the movie’s songs make it worthy of a watch, but negative points for yanno, the stuff I said above. The relationship between O’Malley and Fitzgibbon does progress nicely though, and by film’s end it’s kind of nice. Said the worst description of a movie ever.

To conclude with this conclusion, Going My Way is to Bingy as An American in Paris is to Gene Kelly: The movie was just OK for me, but the talented singing man keeps it out of C-territory.