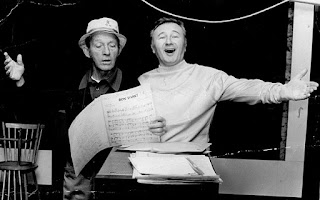 It took the mainstream media a lot of time to report on the death of the great Ken Barnes, but finally here is a great article...

One of Britain's most accomplished record producers, film historians and writers, Ken Barnes worked with some of the biggest names in Hollywood. As a record producer he went between London, Los Angeles, Nashville and New York, recording such stars as Bing Crosby, Peggy Lee, Slim Whitman, Frankie Laine, Connie Francis and Jack Jones, selling more than five million records and earning a string of silver, gold and platinum discs.


He enjoyed an enduring working relationship during Bing Crosby's final years, which came about because Crosby had liked the work he had done on two albums with the lyricist and singer Johnny Mercer. Barnes flew to California to meet Crosby at his sprawling Hillsborough residence. He was kept waiting before being shown into a room where Crosby apologised for the delay, explaining that he had been writing a foreword for a book on the songwriter, Harry Warren.

He asked Barnes, "Do you know of Warren's work?", which unleashed a torrent of song titles and knowledgeable facts about the composer, immediately cementing the relationship. Barnes produced Crosby's final six albums, one of which included the reflective song, "That's What Life Is All About" which he co-wrote with a contribution from Crosby.

Particularly adept at working with big stars, with their egos and peccadillos, he was able to bring out the best in them by subtly, but firmly, navigating potential pitfalls. When he was working with Fred Astaire, the record company wanted to include a few seconds of him tap dancing. Barnes said, "We'll clear a space and you can tap for a few seconds." Astaire politely but firmly replied, "No way am I dancing." Barnes tried with a shoe shuffle but it didn't sound convincing. So he told Astaire, "It's no use. But somebody's feet have got to be there. But if I get someone like Lionel Blair to do it, they'll have an after-dinner story of 'How I did Fred Astaire's dancing for him'." Astaire stared at him for a second and said, "You son of a gun. OK, I'll do it right now!"

During the same London sessions, Astaire was about to record the George and Ira Gershwin standard, "They Can't Take That Away from Me" and said to Barnes, "Let's do the alternate lyrics on the way out." Barnes told him that there weren't any so Astaire told him to come up with something. Barnes thought about it and suggested the couplet, 'The way you drove the car, when we were on a spree; No matter where you are – no, no, they can't take that away from me.' Astaire was delighted, exclaiming, "That's it! Wonderful! I'll record it."

Returning to the US, Astaire took an acetate of the recording to Ira Gershwin's home and, after playing the track, asked Ira what he thought of the new lyric. "What new lyric? Isn't that what I wrote?" Gershwin replied.

When Barnes had the idea of recording Astaire and Crosby together, there was a considerable mismatch of approaches to the sessions. Astaire arrived in London a week in advance expecting to be rehearsing with his singing partner. Crosby, meanwhile, was typically relaxed. Barnes eventually tracked him down to a Scottish golf course club house. "How many songs will we be doing?" he asked Barnes, who told him the usual dozen. Crosby replied, "That's a breeze; we'll just need 10 minutes round the piano". This made Astaire nervous, so with the singer Teddy Johnson Barnes recorded demos for Astaire to learn in advance.

Barnes' writing skills resulted in books like Sinatra and the Great Song Stylists, 20 Years of Pop and The Crosby Years, in addition to a recent novel, The Sea Dogs, inspired by the early swashbuckling movies, especially those of Errol Flynn.

He was also an accomplished scriptwriter, delivering nearly 100 scripts for the BBC, as well as material for Michael Parkinson's chat show and British comedians including Roy Hudd and Les Dawson. He also worked with Peter Sellers, producing an album of classic sketches, Sellers' Market.

A great admirer of Frank Sinatra, he went on to become European president of the Sinatra Music Society, and along with his close friend and colleague, Charles Pignone who runs Sinatra Enterprises in Hollywood, he worked on several Sinatra re-issue projects. This led to Pignone recommending Barnes to write the script for the Emmy-nominated TV biopic of Johnny Mercer, The Dream's On Me, produced by Clint Eastwood.

As a film historian, Barnes gave lectures at the National Film Theatre and UCLA in California, and it was his encyclopaedic knowledge of cinema, from silents to the present day, that provided another string to his bow. In 1995 he set up a film restoration company, Laureate DVD, predicting the massive interest in the format, especially restoring and preserving movies that were recorded on film with all its associated fragility. Laureate released the first special editions of Citizen Kane and Holiday Inn as well as box sets of the Marx Brothers, Cary Grant, and the classic collaborations of Astaire and Ginger Rogers, and Bob Hope and Crosby.

Born in Middlesborough in 1933, he was educated in Redcar before doing National Service in the Royal Corps of Signals. He trained as a draughtsman, but his early passion for music in the jazz/swing and Great American Songbook genres led him to London in the 1960s to work as a marketing executive for Polydor and Decca.

His last studio recording was an album in aid of the charity Help for Heroes, recorded in the studio on the RAF Northolt air base with the Royal Air Force Squadronaires and myself. Another recent project was writing liner notes for the 60-page booklet included with the recent four-disc box set, Sinatra In London. And for the Smithsonian Institute he wrote liner notes for a forthcoming album of Sinatra's work which will now be dedicated to Barnes' memory. At the time of his death he had just finished working with Peggy Lee's granddaughter, Holly Foster-Wells, on a CD/DVD box set, Peggy Lee In London, a collection of the recordings Barnes produced in 1997, which will be released later this year. 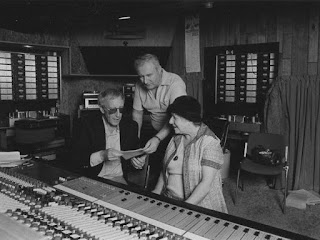 SOURCE
Posted by David Lobosco at 8:39 AM