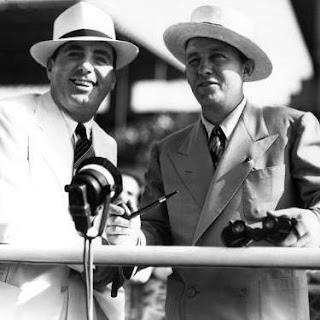 On the sunny afternoon of July 3, 1937, the original laid-back Californian himself, Bing Crosby, stood at a turnstile collecting tickets for his new seaside racetrack, Del Mar. Having been bitten by the racing bug, Crosby and a bunch of his Hollywood buddies (among them Pat O’Brien, Oliver Hardy and Gary Cooper) hatched the idea for a horse palace by the ocean where you could play all day, party all night and leave the cares of the world behind.

The group’s first meeting took place at Warner Brothers studios in Burbank where the Del Mar Turf Club was formed. From the start, Hollywood fingerprints were all over this racetrack.

That first day, more than 15,000 came for a look. Word got around fast because there were more than 18,000 on hand by the second afternoon. The Hollywood connection continued for decades at Del Mar (halted only by a three-year shutdown of racing during World War II) with a parade of show biz personalities including Mickey Rooney, Ava Gardner, Dick Powell, Joan Blondell, Edward G. Robinson, Red Skelton, Lucille Ball, Desi Arnaz and Jimmy Durante.

The Santa Fe Railroad launched a special racetrack train from Los Angeles to Del Mar that carried Hollywood stars and, at times, late-running horses. The party started on the train. If the train was late, the races were delayed. It became a Del Mar tradition for the fans in the grandstand to start cheering when they saw the train turn the bend just before the station. 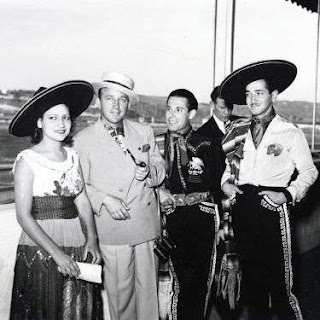 Bing’s relaxed attitude about life carried over to the racetrack. The track’s longtime publicist Eddie Read was quoted as saying: “This is where nobody’s in a hurry but the horses.”

Out on the track itself, Del Mar had its share of magic moments. Drawing on its Hollywood contacts, the plant was the first to make use of the photo-finish camera at its inaugural meet in 1937. The camera, an invention of Lorenzo del Riccio, an optical engineer who headed Paramount Pictures’ technical research laboratories, was designed to produce a strip photograph of the passage of time at a fixed point – in this case the finish line. Today, just about every racetrack in the world uses the technology.

In 1938, Del Mar hosted the historic match race between the American handicap champion Seabiscuit and the South American import Ligaroti. The race pitted Bing Crosby and Lin Howard against Lin’s father, Charles S. Howard, famous owner of Seabiscuit and a director of the Del Mar Turf Club. It was a $25,000 winner-take-all contest that drew 20,000 to the track and was heard coast-to-coast on the NBC radio network. At the end of a ferocious battle that saw the horses trading head bobs and the riders trading whip slashes, “The Biscuit” won by a nose in 1:49, breaking the nine-furlong track record by an amazing four seconds.

In recent times the track has become a fertile proving ground for many of the nation’s best horses and horsemen. Champions race at Del Mar each summer and they are trained by Hall of Fame conditioners with famous names like Ron McAnally, Richard Mandella, Neil Drysdale and Bob Baffert and their world-class jockey colony is led by stars like Hall of Famer Mike Smith, Garrett Gomez, Alex Solis and Rafael Bejarano. 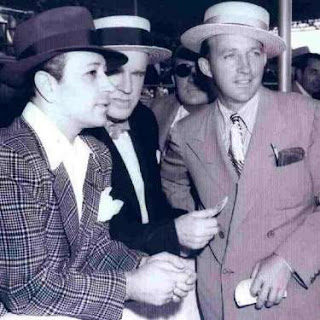 SOURCE
Posted by David Lobosco at 5:09 AM