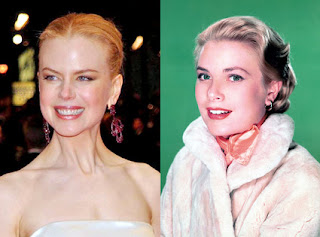 NICOLE Kidman is reportedly being considered to play the role of Grace Kelly in Olivier Dahan's Grace of Monaco. Kidman's deal is not yet closed for the $14.5 million French movie, but she is in advanced talks to play the movie star who became a princess, entertainment news website Variety.com reports.

The role is being sought by almost every top actor in Hollywood, but the Australian leads the contenders.

Grace of Monaco is set between December 1961 and November 1962 when Kelly, an Oscar winner and mother of two, had already spent six years as the monarch of a European nation.

SOURCE
Posted by David Lobosco at 8:14 AM