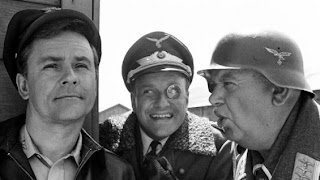 A federal judge denies Bing Crosby Productions' attempts to halt an arbitration initiated by the WGA to allow the show's original writers to exploit theatrical motion picture rights to the popular 1960s show.

The Writers Guild of America is headed to arbitration to establish that the original writers of the 1960s TV show Hogan's Heroes are entitled to lucrative "separated rights" in the story of a German prisoner-of-war camp during World War II. The WGA is making the move over the strenuous objection of Bing Cosby Productions, the producer of the original series. If successful, the writers will have the ability to license a film remake of the classic show.

Hogan's Heroes premiered in 1965, created by Bernard Fein and Albert Ruddy. The CBS sitcom lasted for 168 episodes through six seasons and still plays in syndication on MeTV.

In 1963, Fein and Ruddy assigned rights to their creation (then titled "Heroes") to Bing Crosby Productions and in the following year, entered into an employment agreement with BCP whereby they got $4,500, a bonus payment of $500 for the broadcast of the pilot, and 10 percent of the the show's net profits.

It wasn't a huge sum, but nearly 50 years later, Fein's widow and Ruddy could be taking home more if an arbitrator is convinced that the writers held onto separated rights, which under the terms of the intricate guild agreement, means that credited TV writers reserve many literary rights even when the producers hold the copyright. "Separated rights" are what allow writers of TV shows to profit when movie studios develop movies based on the material, as happened recently with 21 Jump Street, last weekend's No. 1 movie at the box office.

The WGA submitted its arbitration claims last October, which caused BCP, Rysher Entertainment, and Qualia Capital to file a lawsuit in California federal court seeking a declaration that this dispute couldn't be arbitrated.

The judge added that because the writers appeared to legally be employees of BCP, which was a signatory to the WGA agreement, "it will be up to the arbitrator to decide whether WGA's claim on behalf of Writers is meritorious."

The timetable for the arbitration is not known, and it's possible that the claims could settle.

The nature of separated rights has been of some controversy between writers and producers over the years. For example, last August, the WGA attempted to stop a musical version of the 2000 Universal film, Bring It On, arguing that the stage version violated the film scriptwriter's reserved separated rights. (The case settled on a confidential basis.)

Arbitration decisions are not technically binding as precedent, althought they are usually cited as such. But the ruling by Judge Wilson could be impactful, leading other writers of old TV shows to make their own attempts to pull rights from under the noses of TV producers.

When Hogan's Heroes first premiered, it was seen by many people as a remake of a stage play entitled Stalag 17, which was adapted into a 1953 Billy Wilder-directed film. CBS, which broadcast Hogan's Heroes, was sued by Stalag 17 writers Donald Bevan and Edmund Trzcinski for copyright infringement, but the judge dismissed the case, finding "striking difference in the dramatic mood of the two works": The play was grim and somber; the TV show was slapstick.

It was a big victory for the TV show's makers at the time, but ironically, had the plaintiffs been successful in the case, Fein and Ruddy would own no separated rights, as the WGA notes on its website that only original works, not based on existing material, are eligible. Of course, losing the copyright would have also made everything moot.

Bing Crosby sold his production company in 1967 and the Crosby family and estate does not own it at this time...

SOURCE
Posted by David Lobosco at 4:16 AM