This review of High Society (1956) is taken from an excellent blog called "Ruby At The Movies"... 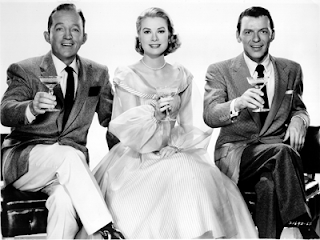 Set your imagination adrift in Newport, Rhode Island in the 1950′s where beautiful young socialite Tracy Lord (played by Grace Kelly) is making final preparations for her society wedding to her ideal (but stuffy and conservative) husband, George Kittridge (by John Lund). This weekend is Tracy’s wedding – but she has been married before, to the charming and successful jazz musician C.K. Dexter-Haven (by Bing Crosby) who lives nearby. He happens to call in to see her on the very weekend of her wedding – because he and his friend, fellow musician Louis Armstrong (by Louis Armstrong!) plan to attend the Newport Jazz Festival that same weekend. Dex still loves Tracy and he is intent on winning her back, by fair means or foul – and this is his last chance to do it. As with all society events of the time, the media is allover this wedding and a reporter for the tabloid “Spy” magazine, Mike Connor (by Frank Sinatra) with his photographer Liz Imbrie (Celeste Holm) are sent to the Newport mansion for the weekend to cover the event. Once he meets Tracy, Mike falls for her too. Amongst all this chaos and confusion, Tracy finds she must choose between these three men – so she must ask herself “what is best to do? It’s my wedding … but will “safe” John be the best husband for me?” 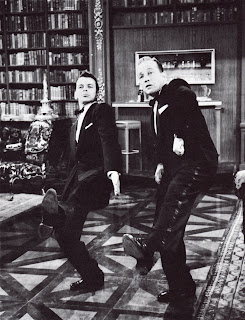 This is a very entertaining movie with lots of fun, a witty script, stellar cast and marvellous music. Grace Kelly is as beautiful as ever (sometimes Keira Knightly puts me in mind of Grace Kelly). The music men, Bing Crosby, Louis Armstrong and Frank Sinatra are all fabulous and their collective huge talent brings life to the already excellent Cole Porter score. The combination produces such classics as Crosby & Sinatra’s “Well, Did You Evah? (What a swell party this is ….)”; Louis Armstrong & Bing Crosby’s “Now You Has Jazz”; Grace Kelly’s “True Love” duet with Bing Crosby; and Sinatra’s “You’re Sensational”. These are all beautifully choreographed and the entire movie is captured in full technicolor. It’s one of my all time favourite movies.

The movie is a musical remake of the 1939 comedy play “The Philadelphia Story” by Philip Barry.

Made in 1956. Directed by Charles Walters.