MY IMPRESSIONS OF ANYTHING GOES 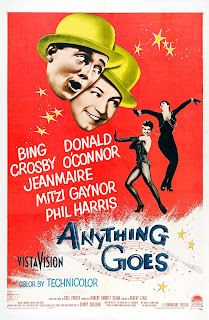 The musical Anything Goes was a superb Cole Porter broadway show when it opened in the 1930s. Since its 1934 debut at the Neil Simon Theatre (at the time known as the Alvin) on Broadway, the musical has been revived several times in the United States and Britain and has been filmed twice. The musical had a tryout in Boston, before opening on Broadway at the Alvin Theatre on November 21, 1934. It ran for 420 performances, becoming the fourth longest-running musical of the 1930s, despite the impact of the Great Depression on Broadway patrons' disposable income.

The movie was first filmed in 1936 with Bing Crosby and Ethel Merman, but it bared little resemblance to the broadway show. Twenty years later, Bing was ending his contract with Paramount Studios after twenty four years with the studio. His last movie for Paramount would be an updated version of Anything Goes in 1956. Though this film again starred Bing Crosby (whose character was once more renamed), Donald O'Connor, and comedian Phil Harris in a cameo, the new film almost completely excised the rest of the characters in favor of a totally new plot. The film features almost no similarities to the play or 1936 film, apart from some songs and the title.

I have always enjoyed this 1956 swan song Bing made for Paramount. However, this movie could have been a great movie and not just a good or fair movie. I think my biggest problem with the film was Bing's co-star Zizi Jeanmaire. She was a popular French ballet dancer, who was married to the choreographer of the movie Roland Petit. Whether she got him his job on the film or visa versa, I don't know. However, she was totally wrong as Bing's love interest. Bing and Jeanmaire just did not have the chemistry. She was a fine dancer, but the Cole Porter song "I Get A Kick Out Of You" was wasted on her limited vocal ability. 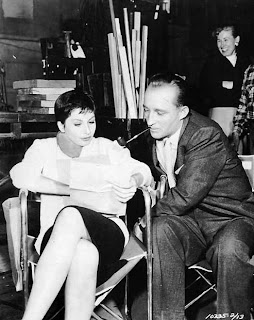 Speaking of the Cole Porter score, Paramount did a grave injustice by tearing apart the great Broadway score. The primary musical numbers ("Anything Goes", "You're the Top", "I Get a Kick Out of You", "It's De-Lovely" and "Blow, Gabriel, Blow") with updated arrangements appear in the film, while the lesser-known Porter songs were cut completely, and new songs, written by Jimmy Van Heusen and Sammy Cahn, were substituted. I enjoy the music of Cahn and Van Heusen, and they wrote some of the great songs in Frank Sinatra's songbook. However, when they wrote for Bing in the 1950s, the songs sounded tired and corny. The two songs they wrote for Bing were "Ya Gotta Give the People Hoke" and "A Second Hand Turbin". Bing deserved better songs than this. 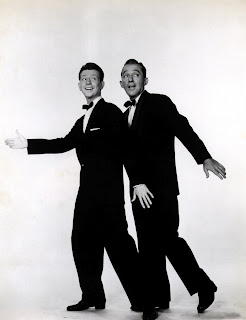 One more thing I would have done differently with the film is the use of Phil Harris. Harris not only was a great personality and singer but also a personal friend of Bing. In the movie he played the father of Mitzi Gaynor. He had a good role in the film, but Harris did not have much interaction with Bing. I think that was a wasted opportunity for a musical number between the two. It would have made for some great cinema.

Again, while the 1956 version of Anything Goes is no Singin' In The Rain, it is not a bad movie. It was one of the first Bing movies I remember watching and dispite what I would change, I think the pairing of Bing and Donald O'Connor was great. Also the finale of "Blow Gabriel Blow" is a fitting end to Bing's association with Paramount. He helped to save the studio from bankruptcy in 1932, and Bing was one of the studio's biggest stars for the next two decades... 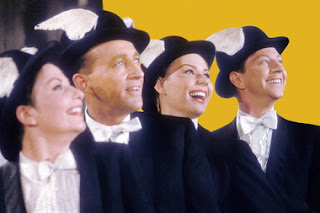