THE CENSORING OF HOLIDAY INN 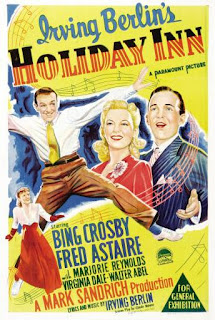 I love this time of the year for the sheer amount you see and hear Bing Crosby. You hear him on the radio. You hear him at the malls, and you see him on television. At least once a week in December, one channel is showing either HOLIDAY INN or WHITE CHRISTMAS. It is a great time to be a Bing Crosby fan.

This is the second year that the cable channel AMC (American Movie Classics) is showing HOLDAY INN. However, it is also the second year that a musical number has been cut and censored from the movie. The number is called "Abraham" and it marks Abraham Lincoln's birthday. The number is in blackface, which is of course an outdated type of performing. It can be offensive as well, however it is altering and censoring the movie.

A little history on blackface...Blackface is theatrical makeup used in minstrel shows, and later vaudeville. The practice gained popularity during the 19th century. In 1848, blackface minstrel shows were the national art of the time, translating formal art such as opera into popular terms for a general audience. Early in the 20th century, blackface branched off from the minstrel show and became a form in its own right, until it ended in the United States with the U.S. Civil Rights Movement of the 1960s. Blackface was an important performance tradition in the American theater for roughly 100 years beginning around 1830. It quickly became popular overseas, particularly so in Britain, where the tradition lasted longer than in the US, occurring on primetime TV as late as 1978 and 1981.

In both the United States and Britain, blackface was most commonly used in the minstrel performance tradition, but it predates that tradition, and it survived long past the heyday of the minstrel show. White blackface performers in the past used burnt cork and later greasepaint or shoe polish to blacken their skin and exaggerate their lips, often wearing woolly wigs, gloves, tailcoats, or ragged clothes to complete the transformation. Later, black artists also performed in blackface. Stereotypes embodied in the stock characters of blackface minstrels not only played a significant role in cementing and proliferating racist images, attitudes and perceptions worldwide, but also in popularizing black culture.[citation needed] In some quarters, the caricatures that were the legacy of blackface persist to the present day and are a cause of ongoing controversy. One view is that blackface is a form of cross-dressing.

By the mid-20th century, changing attitudes about race and racism effectively ended the prominence of blackface makeup used in performance in the U.S. and elsewhere. It remains in relatively limited use as a theatrical device, mostly outside the U.S., and is more commonly used today as social commentary or satire. Perhaps the most enduring effect of blackface is the precedent it established in the introduction of African American culture to an international audience, albeit through a distorted lens. Blackface's groundbreaking appropriation,exploitation, and assimilation of African-American culture—as well as the inter-ethnic artistic collaborations that stemmed from it—were but a prologue to the lucrative packaging, marketing, and dissemination of African-American cultural expression and its myriad derivative forms in today's world popular culture.

Getting back to Bing Crosby wearing blackface, he only did it in three of his movies. Bing was far from a racist, having helped many black jazz artists and singers throughout his career. I had one person tell me that they did not want their child to see the blackface scenes, because it was hard to explain it to them. I feel that is what is wrong with society today...erase it and it never happened. Just as slavery, and the slaughter of the American-Indian happened, so did blackface. If we do not discuss the mistakes of our past, how can we teach our children to be better people in the future? That is why I think it is wrong to cut out the "Abraham" scene from HOLIDAY INN. It was entertainment in 1942, but I believe 68 years later it can be a valuble teaching tool. American Movie Classics did not return our request for comments for this article. 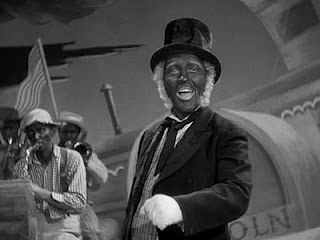 Posted by David Lobosco at 9:07 AM